I am pleased to welcome Avon Gale and Piper Vaughn on Queer Books Unbound to celebrate the release of Trade Deadline, the final installment in their Hat Trick series – featuring a hockey player and a marine biologist. Please give them a very warm welcome! 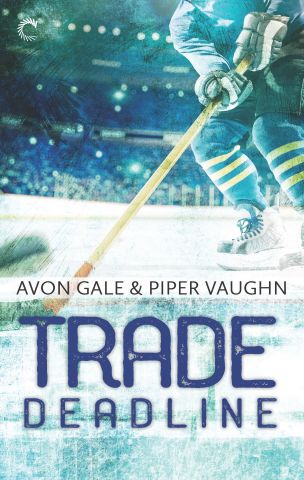 Daniel “Bellzie” Bellamy should be on top of the world—a Stanley Cup is the perfect topper to his fourteen-year NHL career. But despite the post-win high, something’s missing. When the chance to play for his hometown team, the Miami Thunder, comes along, he’s open to it. And when he runs into an old friend from his past soon after he makes the move, he wonders if it might be kismet.

Micah Kelly never thought he’d see his childhood crush—and first kiss—again. Danny Bellamy moved on to bigger and better things when they were teenagers, and the idea that Micah’s relationship with the professional hockey player could be anything more than one-sided Instagram thirst seems too good to be true.

Maybe too good to be true is the new reality, though. As the season goes on, Micah teaches Daniel to surf, and Daniel introduces Micah to his lovable pack of rescue dogs and the world of being a hockey boyfriend. Life is good. But when things on the ice don’t go as planned, they’ll have to decide if their rediscovered romance is built to last.

Avon Gale lives in a liberal Midwestern college town, where she spends her days getting heavily invested in everything from craft projects to video games. She likes road trips by car, rock concerts, thunderstorms, IPAs, Kentucky bourbon and tattoos. As a queer author, Avon is committed to providing happy endings for all and loves to tell stories that focus on found families, strong and open communication, and friendship. She loves writing about quirky people who might not be perfect, but always find a place where they belong.

Piper Vaughn is a Latinx author and longtime romance reader. Since writing their first love story at age eleven, they’ve known writing in some form was exactly what they wanted to do. A reader to the core, Piper loves nothing more than getting lost in a great book.

Piper grew up in a diverse neighborhood in Chicago and loves putting faces and characters of every ethnicity in their stories, making their fictional worlds as colorful as the real one. Above all, Piper believes there’s no one way to have an HEA, and every person deserves to see themselves reflected on the page.