Good morning! I am very excited to welcome May Peterson on Queer Books Unbound. The second book in her Sacred Dark fantasy series, The Immortal City, releases today and we have an exclusive excerpt for you! 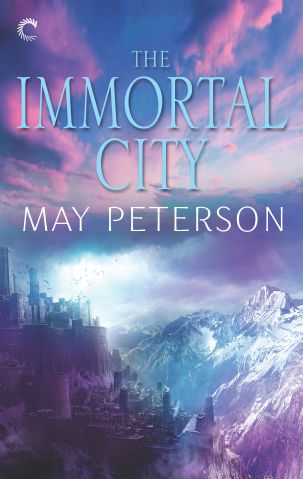 Sometimes you just have to jump.

The second book in The Sacred Dark series, a lush fantasy romance by acclaimed author May Peterson.

I don’t remember you…

Reborn as an immortal with miraculous healing powers, Ari remembers nothing of his past life. His entire world now consists of the cold mountainside city of Serenity. Ruled with an iron fist. Violent.

I may never remember you…

Regaining the memories of who he once was seems an impossible dream, until Ari encounters Hei, a mortal come to Serenity for his own mysterious purposes. From the moment Hei literally falls into his arms, Ari is drawn to him in ways he cannot understand. Every word, every look, every touch pulls them closer together.

But I’m with you now…

As their bond deepens, so does the need to learn the truth of their past. Together they journey to find an ancient immortal who can give them what they both want: a history more entwined than Ari could have ever imagined, but which Hei has always known.

May Peterson is rumored to be some kind of magical creature, but exactly which kind is still debated by scholars. While they sort that out, May busies herself as a romance and fantasy author and freelance editor. May has always had a deep fondness for books, animation, and comics. She’s drawn toward both writing and reading stories that are magical, hopeful, and distinctive, as well as those that explore identity, queerness, and emotional connection. She believes that bringing a daydream to life with its own tale to tell is always a small miracle.