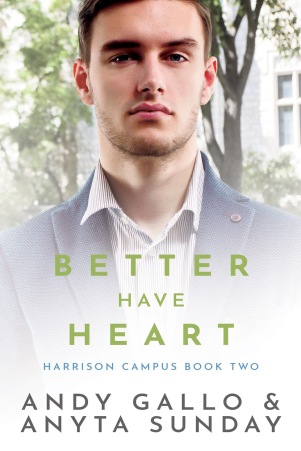 They hate everything about each other, so why do they harmonize so well?

Isaiah Nettles wants a chance. A chance to help his family.

The prestigious Gage Scholarship will secure his future. He needs this.
The competition might be hot, but Darren Gage is a golden child.
No way will Isaiah let an entitled rich kid be handed the award.

But what if Darren is more than an entitled rich kid?

Darren Gage wants to be seen. Seen as more than just his name.

The Gage Scholarship will let him shine. He needs this.
Sure, Isaiah is insanely sexy—and right to stand up for himself—but he is the competition.
No way will Darren let just anyone take his legacy.

But what if Isaiah isn’t just anyone?

“Better Have Heart” is an enemies to lovers, slow burn M/M romance with a HEA. This New Adult, college, opposite attract, rich-boy poor-boy novel can be read as a standalone.

Automated lights flicked on as Darren entered the cool corridor.

Damn, he was tingling with hyperawareness. It was like Isaiah’s warm lips were still hovering at his ear. It took all his self-control not to give in to the sudden rush of arousal.

This really was a bad idea.

Yet, he hadn’t hesitated to waltz inside—and it had nothing to do with getting his phone back.

Isaiah strolled past him; that rock-star confidence he had going on was slowly driving Darren insane. Christ, he was hot.

“Home sweet home away from my dorm room.” Isaiah gestured around them, sweeping an arm out.

Isaiah’s sleeve traveled up, and Darren got an eyeful of his tattoo. His hand shot out, catching the guy’s arm. “You’re kidding.”

Isaiah spun around with the cockiest eyebrow arch Darren had seen yet. Still, Darren didn’t let go. His thumb grazed over the ink as he studied it.

He looked up at Isaiah, slammed with an uncomfortable amount of attraction that went a little further than lust. It was like a soccer ball to the stomach, winding him. “Thelonious Monk?”

Isaiah’s gaze snapped to his, surprised. “You recognize him?”

“Ah, yeah. He’s only the eleventh-greatest jazz musician of all time.”

“Eleventh greatest? Are you kidding me? He’s hands down in the top ten.”

Isaiah paused too, then cleared his throat. “Look, Monk definitely places in the top ten.”

Darren looked down at Isaiah’s arm. That he was still holding. He let go. “Okay, convince me.”

“Yeah. Why should Monk be in the top ten?”

Isaiah laughed and walked backward with a growing grin. “This conversation could go on all night.”

To celebrate the release of Book 2 in the Harrison Campus series – BETTER HAVE HEART – Andy Gallo and Anyta Sunday are giving away 3 e-copies of Better Have Heart! Must be 18 years old to enter and win; open internationally.

Andy Gallo prefers mountains over the beach, coffee over tea, and regardless if you shake it or stir it, he isn’t drinking a martini. He remembers his “good old days” as filled with mullets, disco music, too-short shorts, and too-high socks. Thanks to good shredders and a lack of social media, there is no proof he ever descended into any of those evils.

Andy does not write about personal experiences and no living or deceased ex-boyfriends appear on the pages of his stories. He might subconsciously infuse his characters with some of their less noble qualities, but that is entirely coincidental even if their names are the same. And while Andy leaves the hard sci-fi/fantasy for his alter ego, Andrew, in his mind a touch of the supernatural never derailed a good relationship.

Married and living his own happy every after, Andy helps others find their happy endings in the pages of his stories. He and his husband of more than twenty years spend their days raising their daughter and rubbing elbows with other parents. Embracing his status as the gay dad, Andy sometimes has to remind others that one does want a hint of color even when chasing after their child.

A bit about me: I’m a big, BIG fan of slow-burn romances. I love to read and write stories with characters who slowly fall in love. Some of my favorite tropes to read and write are: Enemies to Lovers, Friends to Lovers, Clueless Guys, Oblivious MCs, Everyone (Else) Can See It, Slow Burn, Love Has No Boundaries. I write a variety of stories, Contemporary MM Romances with a good dollop of angst, Contemporary lighthearted MM Romances, and even a splash of fantasy. My books have been translated into German, Italian, French, and Thai.