Little Black Bird, by Anna Kirchner, is a Urban Fantasy novel that follows Wiktoria as she discovers that magic is real and sorcerers are living hidden in her Polish hometown. This realisation leads her to question the origins of the strange abilities that have plagued her since she was a child. She finds herself battling both sorcerers and demons alike, with only her friends and a strange boy she seems to share her dreams with.

Little Black Bird is the start of a new series that is heavily inspired by Anna’s native Polish folklore. The book has questioning/asexual representation.

The gorgeous cover of Little Black Bird is made by Karolina Wucke. 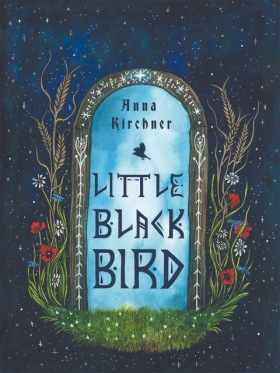 Magic is dying out, but it will not disappear without a fight.

Wiktoria is a seventeen year old with a secret: she has psychic powers. Her uncontrollable telekinesis hurts her and others, setting fires and throwing objects in the air, no matter how hard she tries to hold it back. All she wants to have is a peaceful, average life, but it’s difficult when you’ve been cursed to destroy the magical world.

Her carefully maintained facade of normality starts to unravel when she’s hunted down by local sorcerers and their Guardian, and accused of unleashing banished demons back into the human realm. When a murder shakes up the magical community, everyone agrees that the only way to save the world is to kill Wiktoria.

Her only ally is a boy who can read her mind, shares her dreams and makes her question her sexuality. Together, they face mythical creatures and uncover ancient legends, and they soon realize that there is no such thing as simply good or evil. Whether they break the curse or allow it to fulfil its destiny, the magical world will be forever changed.

Little Black Bird is a tale of trust, friendship and family, and what it means to discover one’s true path.

Two years. Two more years and I’d be in med school, and she’d be able to move to dad or do whatever else she wanted and just have a normal life. Two more years and maybe she’d be able to stop feeling guilty about the way I’d turned out.
I hurried towards the tram stop. The area was grim and I didn’t want to spend any more time there than necessary. After the stalker incident, I was jumpy and I scanned every person and car, wishing that the pocketknife was in my hand instead of the bag. I wouldn’t have the guts to use it, but no one needed to know that.
The tram stop was empty, save for two men drinking from a bottle hidden in a brown paper bag. Certainly just water. Not suspicious at all. I moved further away from them and paced near the rails, willing the tram to hasten. I stiffened every time the light changed to red and cars stopped right next to me. An old Volkswagen rolled past me and came to a halt. Instinctively, I took a step back then scolded myself. I was two tram stops away from where I’d grown up. It was my neighbourhood. I knew most of the local muggers from primary school and they left me alone.
But I wasn’t dealing with local thugs, was I?
There were two men inside and one of them was staring at me. The car vibrated with the same weird energy I’d sensed from Artur and my stalker. I took two more steps back before breaking into a run. The car door slammed and I knew then that at least one of them was chasing me. I sped up, but I wasn’t fast enough and the distance between us was quickly decreasing. I turned abruptly and sprinted across the street, praying for the police to pick me up for jaywalking, but I was out of luck. The blare of a car horn suggested that the man was on my heels. I needed to be smart. Maybe they were from around here, maybe not, but chances were they hadn’t spent most of middle school exploring the tenements. I fled through the gate of the closest building, bumping into the door just as the guy reached it. If they’d changed the locks, it would have been over. I was lucky and the door opened. I flew onto the staircase and raced down to the basement, almost tripping in the process. The stairs ended with a naked brick wall and there were doors to the left and right. I turned right and pressed my back to the wall behind the door.
It was cold, a stark contrast to my body. The blood rushed in my ears but I could still hear the footsteps. I closed my eyes. I felt my stomach in my throat and my heart beating strong against my ribcage.
The man was close by. My palms were sweaty. I balled them into fists, thumbs out, like Hollywood films had taught me.
The steps echoed as my pursuer descended the stairs. He hesitated at the bottom, then turned towards me and I counted: one, two…
I kicked the door with all I had and ran off down the hall. 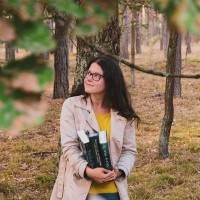 Anna grew up in Poland and lived in a number of countries before settling in Sweden. She spends more time in imaginary worlds than in the real one. She grew up on a mixture of Polish legends and original Grimm fairy tales, which she channels into fiction. She’s a proud Hufflepuff and a dog lover. She is easiest to find on her Instagram, where she talks about books and goes into queer-feminist rants.