The red dragon is hunting her own. Up in the icy peaks of the northern mountains, Orsie Havesskadi spends his days hiding from her, but eventually he is found and his dragon magic stolen. Cursed to wander the lands as a mortal unless he recovers his magic before twenty-four rising crescents have passed, Orsie embarks on an arduous journey. Spurred by the whispers in his mind, his quest takes him to a castle hidden deep in a forest.

Arkeva Flitz, a skilled garrison archer, discovers an abandoned castle in the woods. Trapped there, he spends his days with his two companions, one cruel, the other soothing. One day, a young man arrives at his gates, and soon they are confined by heavy snowfalls and in danger from what slumbers in the shadows of the castle.

Full of rich autumn colors, the market square bustles with life, hooves, and shouts and clatter. In the middle near the fountain, an old man stands on a crate waving his cap at the gathering crowd. Orsie hides his face further behind his long hair, with only half a mind to listen to this unexpected storyteller. His voice is loud over the midmorning racket, though, drawing Orsie’s attention.

“Hear me, hear me! In an age long ago, far beyond the Quiet Lands, there lived a dragon. He wasn’t a mighty dragon—”

Laughter fills the square and covers the voices of the merchants for a while. Orsie frowns, eying the derision that sweeps over many of the onlookers. It’s unpleasant. Orsie remembers from past visits that it’s a rare occurrence for the village to be this animated, but he doesn’t recall its inhabitants being so malcontent. Haumir, sitting at the foot of the Ahrissals’ highest peak, is isolated for most of the year. No trade roads pass through, even though they used to back when the Seaborn were friendlier. Perhaps that’s the reason. Their lives aren’t easy this far up north, but it’s not something Orsie can change. Not really.

Someone hoots and Orsie stifles a grimace. So much for storytelling. He turns his attention back to the row of tables displaying his favorite autumn fruit. Apples, red and yellow and sometimes green, brought north by the caravans that begin their journeys in the hills of Uvalhort. They carry the excess of the plentiful orchards there, sure to be sold quickly in this barren land. Overpriced, too, by the look of it. Orsie only has a few amethyst shards with him, more than enough to pay for his indulgence, but not too polished and not too pure. He wouldn’t want to raise suspicion.

“—but he liked the frost and the cold bite of the highest mountaintops!”

Orsie shrugs as he sniffs at an apple. Some dragons do like the snow. He spares a glance at the storyteller. His hat now sits on the ground before him collecting donations, ineffectively. Orsie sighs. Dragons aren’t very loved in these ages.

“And his name was Havesskadi, the shadow of the icy peaks. He has graced our village from his home above the clouds,” the old man continues, arms raised to point at the mountain standing tall to the north.

“There’s no dragon up there, you old fool,” someone shouts, “or we’d be rich!”

The old man waves a hand, annoyed. “Havesskadi lives, you’ll see. He’ll fly down from his castle and shower us with gems.”

“Dragons don’t care about us,” the other yells back.

“There’s a reason for that,” the old man says. “We hunted them and they hid.”

“Don’t remember no hunting,” someone else says, but Orsie stops listening.

Shaking his head, he slips out of the square. He can shop for apples later, after the ruckus has died down. Instead, he makes his way through the narrow streets, dropping some of the smaller amethyst shards on doorsteps or windowsills. Not enough to make the dwellers rich, but just what they’d need to push through winter. The cold season comes early, here, the icy winds of October around the corner, and Orsie can’t help himself. He’s been observing the villagers for the past few days, lodging at the inn; now he knows just where to plant these lucky finds.

Of course, Orsie could do more. Bring them better gems, shinier, brighter. He could, if he wanted, keep them clothed and fed for lifetimes, but as the past showed, it’s never a good idea. If he gives too much, avarice takes root in people’s hearts, settling deep enough to darken even the kinder souls. Others, both younger and older than himself, have made this mistake before with dire consequences, and Orsie doesn’t need crowds gathering at his gates for undeserving charity.

He’s finishing his meandering and rounding back to the square when he sees the old man from before. The storyteller is sitting at the edge of a narrow street outside the hustle and hurry, surrounded by children.

“A gem,” the old man says, gesturing widely, “carved from the essence of magic, was given to the very first dragon at the beginning of time for safekeeping.”

The children let out an “ah” in unison, and the old man’s smile grows. He’s enjoying his story, it seems, and Orsie leans against a wall, poised to listen.

“After the dragon passed away, the gem divided among his sons and daughters, on and on, until each dragon held a small one right underneath their ribs, tied to them by the force of their heartbeats. Legends grew and spread, and the gems became known as anasketts. Do you know what that means? It’s dragonsoul in the old language of the north.”

A collective blink follows the reveal, the kids mesmerized.

“But the kings of other creatures hunted them!” the old man adds, causing various degrees of frowning.

“Because, you see, the anasketts have such magic that they carry inside them the longevity of their dragon owners, their big castles, and all their treasures— unending flows of precious stones harvested through hundreds of centuries from the very core of time.”

“Davbak, what’s longevity?” A boy elbows another while the old man chuckles.

One of the bickering boys speaks up then, arms crossed. “King Ag never hunted a dragon.”

“No,” Davbak tells him, “but his great-grandfather did. It’s why our lands are left barren. See, many many years ago, King Ag the Fourth stole a dragonsoul. He lived for centuries before Red Mist, the dragon warrior, came and took back what belonged to her kin.”

“Yes, indeed. Red Mist,” Davbak continues, lifting both hands in a semblance of claws, “came and laid waste to the land, cursing it to be forever arid.”

“Would you cut it with that drivel,” a woman scolds Davbak before she grabs two of the kids by their elbows.

She shoos the other children to their homes and leaves with her own, but not without glaring as much as possible at Davbak. Orsie finally moves toward the square, slipping a small piece of onyx in the old man’s pocket as he goes. At least someone is trying to remember the dragons.

*click the graphic to enter the rafflecopter. Giveaway run by IndiGo Marketing & Design* 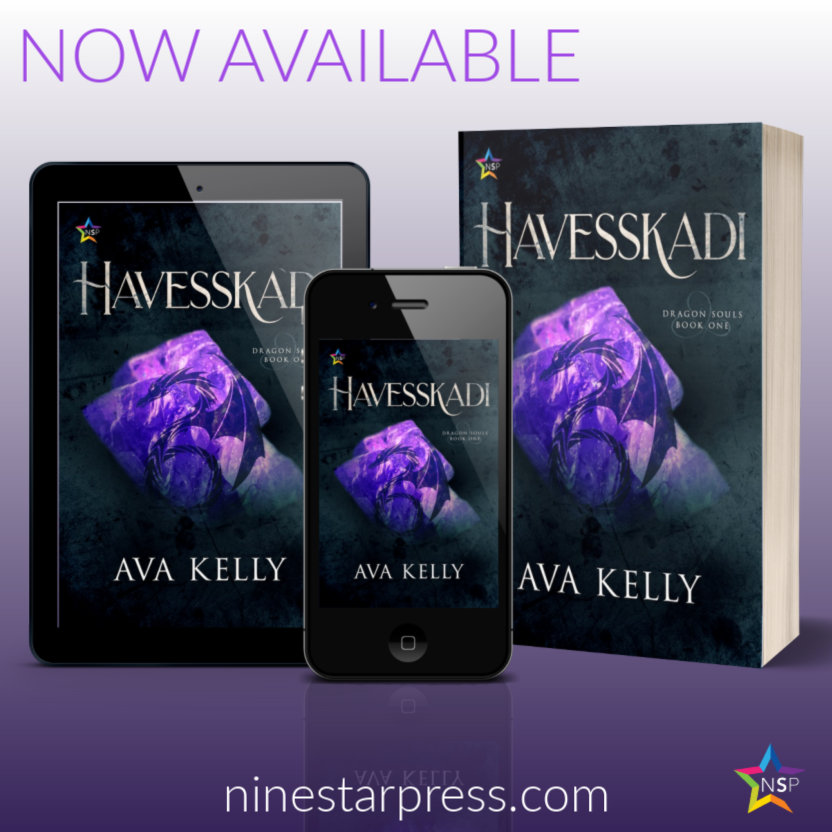 Ava Kelly is an engineer with a deep passion for stories. Whether reading, watching, or writing them, Ava has always been surrounded by tales of all genres. Their goal is to bring more stories to life, especially those of friendship and compassion, those dedicated to trope subversion, those that give the void a voice, and those that spawn worlds of their own.