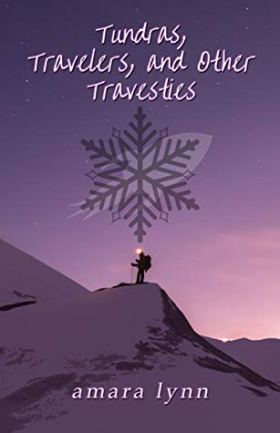 Eis has lived on a solar powered outpost in a tundra covered land all zir life.

After zir parents passing, Eis is left to maintain the outpost alone, struggling to do so between chronic pain flare ups, waiting for the day a traveler might come in need of a warm bed and a meal. A day Eis thinks might never come, until a mysterious craft crashes into one of the solar panels.

Eis never expected a traveler to come out of the craft, or for him to be so captivating and beautiful. Everything Eis knows could change with the coming of this traveler, and yet the greatest travesty would be never knowing what else is out there, beyond the tundra, beyond the skies.

Tundras, Travelers, and Other Travesties is a 5800 word solarpunk post-apocalyptic sci-fi short with a queer protagonist.

For my recent release, Tundras, Travelers, and Other Travesties, I packed a lot of worldbuilding into the background, even though it’s a novelette, and though a lot of it is subtle, there’s actually a lot of facts and science behind it all. The prominent theme is one of hope, and the backdrop is basically a post-apocalyptic land covered in a constant blizzard.

This story actually had prior versions that had been shelved, and I thought I’d never make anything meaningful of it. The first version was a smutty m/m sci-fi piece that took place on a whole world that was a tundra. Then I thought about making the characters aliens, but never got around to rewriting it. It started taking shape again in 2019, when I saw an anthology call for solarpunk winter stories.

The post provided some examples of how winter weather might change on our planet because of global warming or climate change. Just because the planet is heating, doesn’t mean warmer weather. Basically, the planet heating up is causing a shift in the polar vortex, which affects our winters. The polar ice caps melting could also affect the Gulf Stream, plunging Europe into a new ice age (this is something that happens the movie The Day After Tomorrow, though in reality it wouldn’t happen all of a sudden like that). Global warming and the idea that it could cause a new ice age is something that’s fascinated me since I was a kid, so I loved the idea of doing something in that setting. The post also mentioned hot springs, and how the geothermal energy might be used to help grow food or just to keep warm. I’m a sucker for hot springs, so this made its way into the story, too.

But I still needed an element of solar energy involved. I was talking to a friend about solar panels, and she mentioned that solar panels are commonly placed atop landfills for better sun exposure. I found this fascinating, and upon doing some more reading on it, also found that greenhouses could be built into landfill mounds as well. This was a perfect combination for my story, as the main character needed some way to get power and food while living in this winter land. And so, my “winter Wall-E land” as I humorously called it was born!

The story is also queer, of course, with a nonbinary/agender main character, Eis, who uses ze and zir prounouns. It’s a short, heartfelt story about how Eis is struggling to get by on zir own, barely getting by and dealing with chronic pain on top of it. Then a spaceship crashes into one of the solar panels, with a person in it, and Eis’ life will never be the same.

I hope you enjoy it. It’s a short, hopeful, unapollogectically queer short with a hint of queer romance, perfect to snuggle up with on a chilly day!

Amara Lynn has always been a quiet daydreamer. Coming up with characters and worlds since childhood, Amara eventually found an outlet in writing. Amara loves anything to do with pirates, villains and superheroes, and angels and demons.

Amara is addicted to music and gets the most inspiration from moving songs and lyrics. When not writing, Amara usually reads, listens to podcasts, watches anime, plays a video game here and there (but mostly collects them), and takes way too many cat pictures.

Amara is non-binary/enby and queer and uses they/them pronouns.