When I started writing Frostbite I figured it was going to be one of those books that I quietly wrote for myself and never told anyone about. A queer snowed in vampire romance sounded too ridiculous to be interesting to anyone but me. Then twitter assured me that yes, other people (who were not me) wanted to read about Ezra the spoiled rich boy vampire getting snowed in with his supposed enemy so that romantic hijinks could ensue. From there the story grew and grew into something bigger. Now I’m staring down the beginning of a very queer paranormal romance series. I can’t say I’m mad about that. Especially since book two is shaping up to be even bigger and queerer.

But on this release day I have a little present for you all (and a heap of thanks for everyone from twitter and beyond who has supported this trope-fest of a book along the way.)

Whenever I start a new project I almost invariably begin by making a playlist. It sets the mood and helps to make sure I’m not in the middle of a romantic scene when all of a sudden MURDER SONG. It happens more often than you would think. For me anyway. I have a lot of weird overlap between murder songs and romance songs. That probably explains some things about my books.

I’ve put together a short collection of songs from the writing of Frostbite. I hope you enjoy them. (The full list plus a few extras can also be found on Spotify here.)

Happy listening! I hope you all love Ezra and Morgan’s book as much as I loved writing it.

Midnight Thoughts – Set It Off

Here Without You – Michael Barr

Under My Skin – TAEMIN 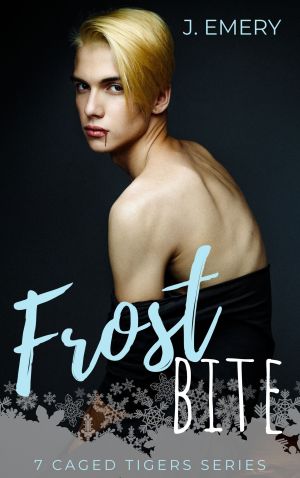 All spoiled vampire Ezra wanted was a night of fun. Drinks, dancing, and hopefully a lot of sex. What he gets instead is kidnapped by a rival vampire clan. He escapes his captors only to end up lost in the woods. In the middle of a blizzard. Seeking refuge from the cold and snow leads him to a seemingly empty cabin.

Morgan just dropped a bomb on his family for Christmas—after years of training in the family monster hunting business he’s quitting, effective immediately. To escape their judgment he runs away to a friend’s cabin for a week of solitude. No family. No phones. Unfortunately the cabin has a little vampire problem: Ezra.

But this vampire is unlike any monster Morgan has come up against before. For one thing, Ezra is dressed in five inch heels and follows Morgan around like a lost puppy. For another, Morgan can’t stop thinking about what it would be like to kiss a vampire instead of killing one. And the longer the snow keeps them trapped together the more vampire and hunter wonder if they’re really meant to be enemies at all.

Emery is slowly writing their way through every fantasy trope imaginable. And if they can make it weirder and queerer while they do, that’s even better as far as they’re concerned.

They spend their free time watching anime, gaming, and drinking large quantities of tea, occasionally all at the same time. They have also been known to document their ridiculous levels of terror while watching horror movies on twitter as @mixeduppainter. Sometimes they even discuss upcoming projects.