In Stocking Stuffers, my heroine, Sasha, and hero, Perry, get snowed in at a Christmas-themed bed and breakfast for a few days. They are stuck there with a meddling book club. This is a bit of a nightmare for Sasha as she is a total Scrooge. She hates Christmas after being left at the altar the Christmas before. But luckily Sasha, who is a sex toy saleswoman, has a big red bag of toys to keep her and Perry occupied and distracted.

I’ve never been legitimately snowed in, but the first winter I lived in Alaska, it was pretty close. Before we owned a snow blower, I had to ask people to help me dig out of my house. We got too much snow for me to be able to shovel easily (or at all), so I hired boys who live down the street to do it for me or asked friends to bring their snow blower over. The first time this happened to me, I didn’t feel prepared at all. I couldn’t pull my car out of the garage (without shoveling almost three feet of snow, which yuck!), and I hadn’t been to the grocery store. It was overwhelming and I felt inadequate and unprepared. Now that I’m a grizzled Alaskan (meaning I’ve lived here for 3 years), getting a large snowfall doesn’t faze me. But preparation is key!

When I think about what my perfect snowed-in experience would be, it’s impossible for me not to think about one of my favorite places in Alaska. There’s a cabin at a state park that I adore. When the sky is clear, you can see Denali from the back porch, and in the winter, the snow can pile waist high. The cabin has a cozy wood stove, a lofted bedroom, and no electricity. In a perfect world, I’d get snowed in at that cabin with my spouse. We’d have an adequate supply of food (plus a camp stove because this is a fantasy), an air mattress (there are no beds in this cabin), flashlights or lanterns, enough phone charge (plus portable chargers) for me to be able read books on my Kindle app, snow shoes, and cards and board games for days. Really, that just sounds like very prepared camping, doesn’t it?

If we’re not living in a fantasy world where I can plan out every moment of my snowed-in experience, my must-haves would be Dr. Pepper, a way to charge my phone (because it has my books), and peanut butter and bread.

Like Sasha in Stocking Stuffers, it is easy for me to imagine a nightmare snowed-in scenario. For her, being surrounded by Christmas craziness is her nightmare. For me, being surrounded by a large group of people who I don’t know very well would be mine. Like, if I were to get snowed-in at my spouses company Christmas party. Or maybe snowed-in at a concert. I feel like that could get very Lord of the Flies very quickly. The Fyre Festival, where festival-goers got stranded in the Caribbean, comes to mind.

In any case, I’ll dream of cozy wood-burning stoves and unlimited firewood, plenty of time to read, and a deck of cards. 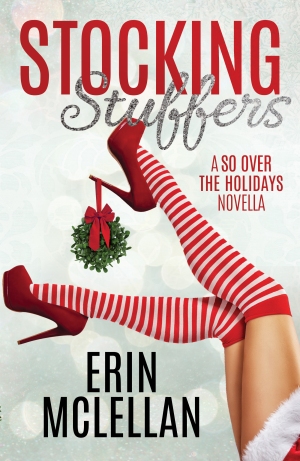 Sasha Holiday is so over the holidays after getting left at the altar last Christmas Eve. But as the marketing maven for Lady Robin’s Intimate Implements, she’s stuck not-so-merrily pitching naughty toys at a romance book club’s Christmas party. Her loathing of the yuletide only intensifies as a snowstorm rolls in and traps her at the Winterberry Inn. Stranded with her is Perry Winters—a hot bearded book club member trimmed in flannel and tattoos.

Perry’s a romantic with an unerring belief in the magic of the season, and he recognizes a Christmas miracle when he sees it. Brave, smart, and confident—Sasha Holiday is a gift. And the gifts keep coming when she suggests they pass the time with some no-strings fun. After all, she has a big bag of toys that would make even Santa want to stay in bed on Christmas Eve.

But the frisky festivities turn complicated as feelings spark between Sasha and Perry. Perry wants to see Sasha once the snow clears, but Sasha is reluctant to take the relationship sleigh ride again. Perry will have to show her that love is more than just a holiday feeling.

Sasha fell back onto Perry’s bed, her stomach full of laughter. Perry kneeled next to her and popped a chestnut past her lips. She nipped his fingers lightly, then chewed the sweet nut.

She’d never had chestnuts before, and she had no idea if they were always so amazing or if it was because Perry was feeding them to her.

He followed his fingers with his lips, kissing her mouth, her chin, down to her throat before sitting up and eating a chestnut of his own.

They’d managed to socialize with the other Winterberry guests for about twenty minutes. Twenty minutes of feverish, festive eye-fucking. Now, they finished their bowl of chestnuts, sharing kisses and laughter over nothing at all.

Perry’s room was similar to hers, except it was on the corner of the house, so it had double the windows. His canopy bed had rainbow-colored Christmas lights wrapped around the posts. The Christmas tree in the corner of his room was huge with thick branches full of spindly needles. His whole room smelled of clean, bitter evergreen, and his skin smelled like smoky cedar.

The Fancy Fleshstroker and her black silky thong were on top of an antique dresser, and they stood out among the twee decorations, glaring in their filthiness.

Perry’s mouth landed on the edge of her jaw, and she tipped her head back, gasping.

“We need my roller bag.”

“The one full of Christmas miracles?” he asked, smiling against her neck.

“I’ll get it.” He jumped up off the bed and jogged into the adjoining bathroom and, she assumed, into the Blue Spruce Room. He came back seconds later with her Lady Robin’s roller bag in hand, a huge grin on his face.

Her heart tumbled over, like a snowball falling down a hill, gaining momentum, faster and faster. Hopefully, it wouldn’t hit the bottom and explode into nothing but powder. “I’m leaving tomorrow.”

His smile faltered for half a second, then he shrugged. “I know.”

“And you’re okay with that?”

She wasn’t sure she could say the words outright, couldn’t ask him if he was okay sleeping with her for one last night when it wouldn’t lead to anything. But how ridiculous was she? If she couldn’t hear the words out loud, then she shouldn’t be living by that philosophy.

She took a deep breath. “Are you okay with one more night of no-strings-attached sex?”

His lips quirked. “On the second day of Christmas my fuck buddy gave to me?” he said, his voice musical but gruff.

“The screw of your life, baby. Get over here.”

Erin McLellan is celebrating the release of STOCKING STUFFERS with a giveaway featuring (1) backlist e-copy of any of her books and (1) bookplate + bookmark! Must be 18 to enter and win. Open internationally. 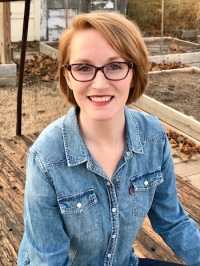 Erin McLellan is the author of several contemporary romances, all of which have characters who are complex, goodhearted, and a little quirky. She likes her stories to have a sexy spark and a happily ever after. Originally from Oklahoma, she currently lives in Alaska and spends her time dreaming up love stories set in the Great Plains. She is a lover of chocolate, college sports, antiquing, Dr Pepper, and binge-worthy TV shows. Erin is a member of Romance Writers of America and its Alaska chapter.