Witcheskin and Rough Sleepers, both set in the Lunar Shadows verse, are two very different but closely entwined stories set in the lush wilds of rural Wales and the harsh gritty inner city of South West England. Two very different main characters and two very different mysteries to be solved. Both are a blend of horror, urban fantasy and LGBTQ+ romance, with colourful supporting casts and complex villains whose motives are driven by their basic human natures.

They have own-voices trans and queer representation, and both books are standalones, but set in the same universe. 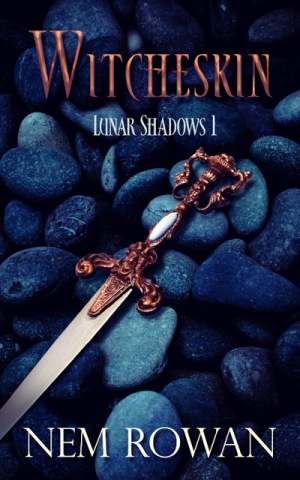 Following the disappearance of his father, keen photographer Owen returns to the Welsh village where his parents grew up to live with his mother and her boyfriend. Despite being born in Wales and having been raised in England, Owen feels like an outcast, and the villagers are unfriendly. He soon discovers an epidemic of cattle mutilations that have been spreading through the countryside like a rash and, determined to discover the cause, he takes up his camera and starts snapping pictures.

While pursuing the mystery, he meets Maredudd, an old friend of his parents of whom they had never spoken, and Owen can’t help but feel drawn to him. Maredudd seems to know more about the mutilations than the other villagers are willing to admit, and even more about the supposed death of Owen’s father than his own mother does. Maredudd shows Owen things he never thought possible, and Owen soon finds himself at the centre of the kind of folk tale only his father could dream of.

Maredudd rubbed my knuckles with his other hand. “Relax. There’s nothing to worry about.”

“But what if someone sees?”

“Sees what?” he asked, his smile morphing into a mischievous grin. I stared at him, exasperated.

“You know… Sees us holding hands…” I whispered, even though there was no one around to hear our conversation.

“So what if they do? We’re not breaking the law. I like holding your hand. Nobody is going to stop me from doing that, especially if you like holding mine in return.” He raised his eyebrows at me, and I couldn’t very well argue with that.

“I do like holding your hand,” I mumbled, feeling stupid. We had stopped at the bottom of the beach, and the tide was lapping at the sand, gushing up to meet our toes. I contemplated taking my boots off.

When I turned to look at him, he had moved closer, and I drew in a sharp breath, aware that he was now right against my side. I could feel the front of his hard torso touching my arm, his body heat comfortable, and gentle despite the blazing sun overheard. His eyes, like green lanterns that seemed to give off light of their own no matter the shadow upon his face, peered right into my own, and I was so astonished, frozen to the spot, when I should have known what would come next. He lowered his head, brushed his nose against mine as though asking permission. My chest was rising, and falling heavily, heart throbbing, lungs puffing, my throat contracting as I swallowed.

I wanted it desperately, but I couldn’t lead when I was so shy, and untouched, afraid of embarrassing myself, and anxious that someone would see us out here. His eyes half-closed, and I thought he would move away. My hand immediately gripped onto his tightly, squeezing it in my grasp in a silent bid to tell him not to. The whole world began to slide and melt out of my consciousness, and we were the only people left, isolated except for the soundless surf that flowed towards us rhythmically. Finally, I felt his lips pressing to mine, and that electricity that had crackled earlier suddenly became a shower of lightning. Like a developing storm, the clouds rolling, and thunder tolling, I let go of my emotions, abandoning the fear I was clutching at moments before. 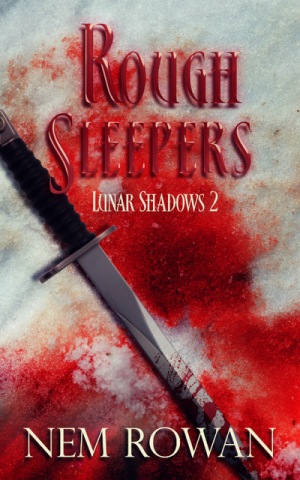 Leon, drag performer and club owner, is attacked by a werewolf one night and loses an arm—and more, after massacring his club guests. Now homeless and tormented by nightmares, he runs away from everything he knows.

Eventually, he meets Ceri, who invites Leon to live with him above a shop owned by a woman who lost her husband and son to a werewolf attack. She and Ceri are still hunting the unknown perpetrator, and Leon gladly lends his own assistance, eager to atone for his bloody past in the hopes he might one day be able to have a home and family again…

Tacked to the wall above him was one of the flyers from The Murderess Club; I spotted the neon writing in a split-second. My eyes lit up when I saw it and I hurried over, reaching to pull out the pin and take down the dog-eared piece of paper. There was a photo of me on the front in one of my Mardi Gras outfits, a huge plume of feathers splaying from the headdress and my body clad in a glittering, shimmering dress of rainbows. I looked young, happy. A couple of queens that had been my friends were either side of me in the photo, all of them dressed up and cheering.

I remembered this flyer; it was for the Pride celebration we had a couple of years back. Diana Princess was at my shoulder, her mouth open in a cry of glee. My teeth clenched together and the muscles in my forehead became tense as a lump formed in my throat, the horror of what I did to her replaying in my mind. All of them were gone. Every person in the photo was dead, except me.

This flyer was a relic from a time long since gone. It was all I had left of my old life, and yet just to look at it was enough to cause unfathomable heartache.

“Leon?” Ceri’s voice answered beside me. I looked round to find him still kneeling, peering up at me over his shoulder.

“I’m sorry, I can’t stop it,” I whimpered as I clutched the flyer to my chest. The tears started to pour from my eyes in streams and for the first time in a very long time, I was unable to stop myself from weeping.

“What’s wrong? Leon? What’s wrong?” He got up and came towards me, his expression beseeching and worried.

“They’re all dead,” I choked. The tears were dripping from my stubbled jaw, plopping on the front of my thick coat and planting themselves there like twinkling gems.

“Who?” he questioned as he stood face-to-face with me, and I allowed him to take the flyer from my fist. He examined it, staring down at the people on the front, before looking up at me again. “Is that you by there?”

I nodded, my mouth pressed into a tight line as I wiped at my dripping face with my sleeve.

“I didn’t even realise. You looked so different. Beautiful,” he murmured as he looked down again. “I mean—I mean, you are beautiful, now. I mean, beautiful, in a different way.”

“Really?” I sniffed, unable to believe anyone could find me beautiful when my eyes were puffy, and my cheeks were red and glistening with tears.

He nodded, and when he smiled, it was a fond one. His hand reached into his pocket, rummaging around until he found a pack of tissues, ripping it open and offering one to me.

“Thanks,” I mumbled as I used it to carefully dab at my eyes.

“You do that like you’re wearing makeup,” he remarked with a cautious chuckle, and I laughed, too, which seemed to reassure him.

“Yeah, I guess it’s a habit I learned.” I smiled finally.

“You know what you said to me the other night?” he murmured, keeping his voice low even though it was unlikely that the others would be able to hear our conversation. “Those rules apply to you, too. You got that? I know I was a bit of an asshole before, when we first met. I didn’t mean it. I don’t like seeing you upset. If you want to talk, we can talk, okay?”

“Okay,” I agreed, glancing down as he pressed the flyer back into my hand.

“Oh—and one more thing. Unfinished business from the other night,” he whispered as he moved closer to me, and when he tilted his head to kiss me, I let him.

Win one of two e-book packages of Witcheskin & Rough Sleepers by Nem Rowan!
(click the graphic to enter!) 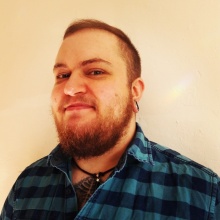 Nem Rowan lives in Sweden with his wife and their girlfriend. He loves reading non-fiction and is fascinated by True Crime and unsolved mysteries, especially missing persons cases and serial killers. Nem is also well-read in mythology and folk tales, particularly British and European folklore. He is a huge fan of Horror movies and Retrowave music.

Nem started writing when he was 11 years old and since then, he’s never looked back. Romance has always been his favourite genre after inheriting a box of Mills & Boon novels from his grandma, but being a Horror fan, there is always some way for him to work in a bit of that to make sure things don’t get too mushy.