I’m delighted to welcome Erin McLellan on Queer Books Unbound today to celebrate the release of her latest book Natural Disaster. It’s the first book in her Storm Chaser series and just as awesome – if not even better – as her previous books! In her guest post below Erin talks about the real-life inspiration behind the story. You should definitely check that out!

When two tornado chasers form a reluctant team, the pressure between them builds…

Human-interest reporter—and son of a famous storm chaser—Guthrie Gale wants nothing to do with severe weather. But his station’s director insists he join the storm chasing team, or else, and worse yet, she pairs him with hotshot rookie chaser Luke Masters.

All Luke wants is to be a part of the KTTY family, and he won’t let prickly Guthrie Gale spoil his chance. Little does he realize Guthrie’s anxiety around storms is more than justified.

As Oklahoma’s unpredictable tornado season picks up, Guthrie and Luke strike up a turbulent working relationship that shifts between lust and bickering. But when they are forced to outrun a dangerous twister, their trust is tested and the desire between them flashes quick as lightning, threatening to burn more than just their careers.

In Natural Disaster, the heroes are storm chasers for a local Oklahoma news station, and they encounter several tornadoes throughout the course of the story. I did a lot of research, including interviewing storm chasers, to prepare for writing this book, but I also pulled from my own experience, not as a storm chaser, but as someone who lived in Oklahoma for twenty-four years.

Like many people who have spent a substantial amount of time in Oklahoma, sheltering from tornadoes is old hat. I have sheltered during tornado warnings in many interesting and unusual places throughout my life, but I’ve also been very fortunate. I’ve never physically been in a tornado, and I’m very grateful to have never experienced one in such an up-close-and-personal way. Still, there were two tornadic events that were very formative to my adolescence and young adulthood.

I grew up in Tornado Alley. On May 3, 1999, one of the largest tornadoes in history passed within a mile of my home. This tornado was on the ground for over 35 miles, was a mile wide at its largest point, caused 41 direct and indirect fatalities, and produced the highest wind speed ever recorded. Had it not been for the exceptional storm warning of local new stations, the loss of life would have been much higher.

I was a child at the time. My family didn’t have an underground storm shelter or basement, so my sisters, my mom, and I put on softball helmets and got in my parents’ bedroom closet, which was the only interior room with no windows.

My family was very lucky we were not hit. Even as a kid, I recognized how lucky we were. Seeing the disaster and destruction afterward was mind-boggling. This tornado ripped inches of asphalt off roads and bark off trees. It reduced houses to matchsticks and carried debris for miles. In the aftermath, communities had to come together to clean up and support each other. The clean up and rebuilding took years. That is my biggest memory of that time—the resilience of my community. It’s an attitude that I’ve seen reoccur again and again in Oklahoma, and one of the reasons I write about my home state.

After the May 3rd tornado, a lot of towns built community storm shelters, and we were lucky enough to live very close to one, so I never had to go to a closet with nothing but a softball helmet ever again.

Every once in a while, a day in Oklahoma comes around that is just ominous. The conditions are exactly right for a lot of long-track tornadoes. It’s muggy and hot and still. The meteorologists on TV prep you early for the possibility of danger. One day during the summer before my senior year of undergrad was exactly like that. I had stayed at school for the summer, so I wasn’t living at home with my parents. I knew there would be tornadoes that day. Everyone did. It was like we were all in a state of suspended fear and anticipation.

As I watched the wall-to-wall coverage that night, I could see the storm ticking closer and closer to my hometown. Eventually, I called my mom to make sure she was heading to the community tornado shelter. My dad was still at work and out of the storm path. My mom and one of my sisters headed to the storm shelter together, but no one thought our house would be hit. No one ever does.

After the storm passed, as I watched the news from 100 miles away, I called my mom. No answer. I called my sister. No answer. Dad. No answer. Eventually, I got through to a friend who could check on the situation for me.

My childhood home had been hit. Luckily, this was not a very large or violent tornado, and this storm didn’t cause fatalities or even many injuries. My family was safe—they’d been in a tornado-safe shelter. The cell towers were down and calls weren’t going through. It was very difficult being so far away that night. Now I live in almost 4,000 miles away, and I think of that night as my training camp for when things go wrong. 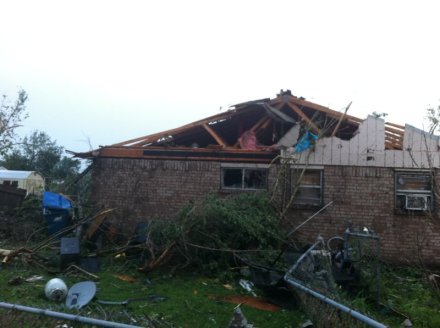 While the house was totaled, it was still somewhat standing and most heirlooms and important belongings were salvageable. It could have been way worse, but it’s still hard to describe what it feels like to see your childhood home destroyed.

There was a distinct smell after the tornado. Everything was wet and muddy and hot. In the days that followed, food rotted in refrigerators all over the neighborhood because the power was out. Tornadoes also do bizarre things. Only three houses were hit on my parents’ street, including theirs. All of the doors and windows were blown out, mud was everywhere, but the mail on the kitchen table was pristine. The bed my mom had been napping on when I called to make sure she was heading to the shelter was covered in shards of glass, but the glass curio cabinet in the living room was unbroken. The tree in their front yard landed in the backyard, but the finicky peony bushes hadn’t been uprooted.

It was an emotional time full of hidden blessings and support. And again, we were very lucky. This was probably only an EF2 tornado (on a scale of 0-5, with EF5 being the largest and most violent). A larger tornado could have swept the house away to nothing. I’m thankful that in 1999 my hometown built a community storm shelter, so no one was sheltering in my parents’ closet when it hit.

It was with these experiences in mind that I wrote Natural Disaster. Most Oklahomans have a tornado story, but I wanted to explore the flip-side—the people who work to forewarn everyday Oklahoma, the storm chasers who drive toward a storm, not away from it. If it hadn’t been for meteorologists, researchers, scientists, and storm chasers, both of these events, ones that had such huge impacts on me, could have been much more devastating.

Erin McLellan is the author of several contemporary romances, all of which have characters who are complex, goodhearted, and a little quirky. She likes her stories to have a sexy spark and a happily ever after. Originally from Oklahoma, she currently lives in Alaska and spends her time dreaming up love stories set in the Great Plains. She is a lover of chocolate, college sports, antiquing, Dr Pepper, and binge-worthy TV shows. Erin is a member of Romance Writers of America and its Alaska chapter.