Hello everyone! It’s been a long time since I posted my last review. This kind of “hiatus” wasn’t planned, but life happened and for the last couple of months I didn’t feel like writing reviews. I barely even touched my review copies, choosing to read other books instead so now I have a huge backlog of review copies to read and review copies to reread because it’s been a bit for some and I want to do them justice when I review them.

So let’s dive in. I’ll start with Top Shelf and then plan to work my way down my stack of ARCs.

Martin is a ghost. Well, not really, but he might as well be. Job gone, home gone, self-respect gone, and no one even seems to notice. The only person who really sees him is Seb, the artist who lives above the used bookstore.

Seb haunts the edges of Seacroft in search of beauty. He knows how to excavate the hidden value in abandoned things–whether it’s in the pages of forgotten books or in Martin’s stuttering attempts to rebuild his life–and transform them into works of art.

Two lost souls, Seb and Martin discover the strength they need to face eccentric townies and their dysfunctional families together. But as friendship sparks toward something more, neither man wants to risk what they’ve only just found. It takes two to fall in love, but it will take the whole community to bring their beauty to life.

*a copy of this was provided by the author

Top Shelf is the story of shy Martin and the (sometimes grumpy) artist Seb.

Martin was a Professor at Mount Garner but after some trouble he quit his job and moved in with his brother who lives in Seacroft. Martin is still dealing with the aftermath of what happened at Mount Garner. He craves a more quiet life, without stress and drama. Being in Seacroft – and then taking a job in a small secondhand bookstore is supposed to help him get his life back in order.

Seb is an artist who mostly works with books, so it is quite useful that his appartment is located above the bookstore. That is also how Seb and Martin meet. Though their first time meeting – and their second one as well for that matter – don’t really go over well. Seb is stressed out when he first meets Martin and reacts more harshly than he normally would when Martin touches one of Seb’s art pieces.

I’ll be honest that I really had trouble liking Seb at first. Rereading the book really helped me understand him better in that first third of the book. Seb appears to be very mysterious in the beginning of the story since he doesn’t share a lot about himself and the rest of the time he just seems to be a rude asshole. (He’s not! Or well… not when he listens before he reacts ;))

Martin on the other hand is just the sweetest sweetheart and in the first half of Top Shelf I constantly wanted to give him a big warm hug. He’s shy and anxious and feels insecure when he first comes to Seacroft. His whole life was thrown for a loop and he’s just trying to catch his footing again when he meets Seb.

As I mentioned above these two don’t get along right away. It takes them a bit to warm up to each other and clear up a misunderstanding. But after that they just clash in the best way. Seb might not have been what Martin was looking for, but he was definitely what Martin needed and vice versa. I loved how they both challenged each other and then slowly fell in love.

I adored Top Shelf! I loved the setting in a bookstore in a quiet town like Seacroft where everyone knows everyone’s business. Have you ever read a book that was set in a small town and you really just wanted to move there and be friends with everone because it just sounded so lovely? Seacroft is like that for me. 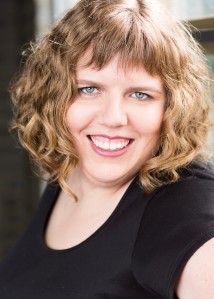 Allison Temple has been a writer since the second grade, when she wrote a short story about a girl and her horse. Her grandmother typed it out for her and said she’s never seen so many quotation marks from a seven-year-old before. Allison took that as a challenge and has gone on to try to break her previous record in all her subsequent works.

Allison lives in Toronto with her very patient husband and the world’s neediest cat. She splits her free time between writing, community theater stage management, and traveling anywhere that has good wine. Tragically, this leaves no time to clean her house.