Thank you so much to Queer Books Unbound for inviting me to post today. I’m excited to share an excerpt of my debut f/f romance New Ink on Life from Carina Press.

In this excerpt MJ, a tough tattoo shop owner, has just discovered that there’s more to the meek apprentice she’s taken on than she originally thought and she’s ready to make use of it—to both of their satisfaction. 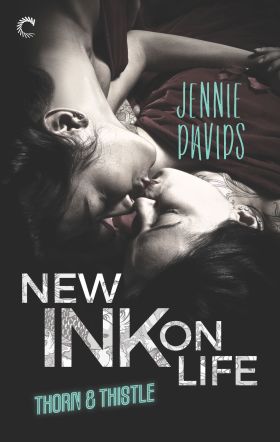 Quiet does not equal weak…

Leaving a dependable job to apprentice as a tattoo artist was a drastic step after surviving breast cancer, but Cassie Whiteaker is nearly five years cancer-free. Nearly. She’s not ready to go out on her own until she clears that all-important hurdle. Also off-limits are relationships and sex—something Cassie is sure she’ll never want again.

Struggling tattoo shop owner MJ Flores doesn’t give a damn what people think, but losing Thorn & Thistle would mean losing everything. When her former mentor’s protégé arrives at her door, MJ hires her out of obligation…at first. Cross-stitching goody-goodies are not her type, but Cassie’s business background might just get the shop back on solid footing. They strike a bargain: Cassie will enact new marketing plans and MJ will teach her to find her inner bitch.

Only when clients request to see Cassie—having learned of the beautiful, compassionate tattoos she creates for survivors and their families—does MJ realize all Cassie has endured. And as Cassie’s fears fade, she finds it harder to keep her admiration for her bad-girl boss from reawakening all she’d feared was lost.

“I’d be willing to help you find your backbone.”

She nodded eagerly, inching even further out of her seat until I was pretty sure she was defying gravity. “I would appre…”

Her shoulders slumped. “I don’t have any money.”

That made two of us. I waved my hand. “Not gonna cost you money.”

Her teeth scraped against that little point in the middle of her bottom lip. “What’s the price?”

“As you’ve already pointed out I need some help with my business. Now that I know you’re a whiz at those things, I’d like you to come up with ideas and give me pointers on how I can bring in some money.”

“Oh.” She perked right back up, a bright smile on her face. “I would do that for nothing.”

“Yeah, don’t be telling people that. You come across too desperate.”

She nodded and holy shit, yup, she pulled out her notebook and wrote it down.

Watching her, the weight that always seemed to be pressing down on my shoulders didn’t get heavier. Yeah, this would be more work for me, but this might be the kind of work I could like. Getting someone to loosen up and let go was a hell of a lot better than invoices.

I put my feet down and leaned forward, stretching my hand out to her. “Then we’ve got ourselves a deal.”

She put her hand in mine and gave it a weak-ass, limp-as-hell shake. I curled my fingers around her wrist, not letting go.

Her fingers wrapped around my hand and then she shook. It wasn’t what I’d call strong and nowhere near Jamie’s bone grinder, but it would do.

Cassie stared down at our hands, her lips slightly parted, a confused little line in the middle of her eyebrows. I followed her gaze. It wasn’t just our hands she was looking at it. Specifically, it was my little finger that was stroking hers.

I slowly lifted my finger. What could I say? She had damn soft skin.

I grinned. “This is going to be fun.”

She smiled with a lot less enthusiasm. It was almost like she knew what I had in store for her.

I jerked my head toward the door. “I’ve got payroll to do. Head out front. First lesson: if the girls ask you to do something for them, tell `em no.”

She swallowed, and it was hard to tell but she might have gotten even paler.

I made a shooing gesture with my fingers. “Go on now.”

She slowly rose and headed for the door, no longer the eager puppy ready to do my bidding.

“Hey,” I called out just before she opened it.

When she turned to look at me over her shoulder I said, “You’ll be tattooing tomorrow.”

Those lines on her forehead deepened. “There’s nothing on the books.”

“That’s `cause it’s not a client getting tattooed. It’ll be just you and me here.”

She reached out and held on to the doorframe.

She didn’t look so robotic now. I’d done that. And she’d done the impossible and had me looking forward to coming in on my day off.

A signed paperback of New Ink on Life to a US address or International to an address that Book Depository delivers and a signed postcard mailed.
*Click on the graphic to get to the rafflecopter*

Jennie Davids lives in the Pacific Northwest with her rescue animals that somehow never end up as well-behaved as their bio promise. The sound of the rain inspires her as she writes or maybe it’s the gallons of hot chocolate she consumes to stay warm in the damp climate.

When not writing Jennie is reading, watching reality TV, or bemoaning how quickly weeds grow back and keep her from reading.