I am so excited to be sharing some queer romance set in New York City. My newest release American Fairytale the second book in the Dreamers series. Fairytale is set in New York City, mostly in Harlem and the Bronx. I am an adopted New Yorker, since this is where I moved to after I left my homeland, the Dominican Republic. There is no shortage of romances set in New York City, however most of them are usually set in lower Manhattan. I wanted to write a romance set in the parts of the city where the Afro-Latinx diaspora settled. So even though one of my heroes, Tom, is ridiculously wealthy and can get a place wherever in New York City he wants, he chooses to settle in Harlem, his first home in the US when he came over from DR. I’ve tried to select some stories that show different sides to the Big Apple, which is still my favorite place on earth.

Ten Days in August by Kate McMurray
This M/M historical romance is set during a ten day heat wave that wreaked havoc in New York City during the summer of 1896. Things heat up literally and to makes matters worse there is a murderer on the loose. Police inspector Hank Brandt is on the case and before he knows it he gets tangled up with Nicholas Sharp a female impersonator who is a key witness to the case. This story is sweet, and the history is fascinating. One of my all-time faves.

Once Ghosted, Twice Shy by Alyssa Cole
This is a delightful second chances novella. Likotsi, who works as the right hand woman for prince Thabiso (the hero in Alyssa’s amazing A Prince in Theory) met Fabiola during a business trip to NYC, but after an amazing night, Fabiola ghosted Likotsi without a backward glance. When the time comes for them to have a second go at something that could be great, they both have to let their guards down and let love in. I really REALLY appreciate about Alyssa’s NYC stories is that she really tries to show an accurate picture of what normal people’s lives are like. No mysteriously rent controlled apartments or people who eat our all the time while living on a student budget. It’s a sweet story and honestly, we just need more F/F centering WoC romance in the world. 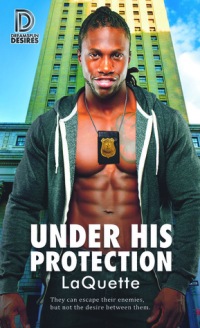 Under His Protection by LaQuette
This category romance hits all the buttons for what I love to read. Two strong people, trying to do better and be better. Camden is a prosecutor who needs protection and the man assigned for the job is Elijah, the detective with who he had the hottest night of his life a few years ago. This book has heart, humor and so much heat. You cannot go wrong with this one.

The Doctor’s Discretion by EE Ottoman
This M/M historical is set in 1831 and it’s the story of two men who are up against a whole lot. Augustus is a trans man and a doctor who is on a mission to save one of his patients, who is also trans and in risk of being committed to an asylum. Enter William Blackwood, an African-American doctor who beings to form an alliance and a lot more with Augustus as they aim to rescue Moss from a horrible fate. This is a very tender romance that also explores some incredibly serious themes.

Fairy-tale endings don’t just happen; they have to be fought for.

New York City social worker Camilo Santiago Briggs grew up surrounded by survivors who taught him to never rely on anything you didn’t earn yourself. He’s always dreamed of his own happily-ever-after, but he lives in the real world. Men who seem too good to be true…usually are. And Milo never ever mixes business with pleasure…until the mysterious man he had an unforgettable hookup with turns out to be the wealthy donor behind his agency’s new, next-level funding.

Thomas Hughes built a billion-dollar business from nothing: he knows what he wants and isn’t shy about going after it. When the enthralling stranger who blew his mind at a black-tie gala reappears, Tom’s more than ready to be his Prince Charming. Showering Milo with the very best of everything is how Tom shows his affection.

Trouble is, Milo’s not interested in any of it. The only thing Milo wants is Tom.

Fairy-tale endings take work as well as love. For Milo, that means learning to let someone take care of him, for a change. And for Tom, it’s figuring out that real love is the one thing you can’t buy.

An Untitled Pseudo Fairy Tale set in NYC – Camilo is a prickly Cuban-Jamaican social worker in New York City, who dreams of being swept off his feet. He finds his prince charming in Thomas, a swoon worthy Dominican millionaire with an adorable kid.

Adriana Herrera was born and raised in the Caribbean, but for the last fifteen years has let her job (and her spouse) take her all over the world. She loves writing stories about people who look and sound like her people, getting unapologetic happy endings. When’s she not dreaming up love stories, planning logistically complex vacations with her family or hunting for discount Broadway tickets, she’s a social worker in New York City, working with survivors of domestic and sexual violence.