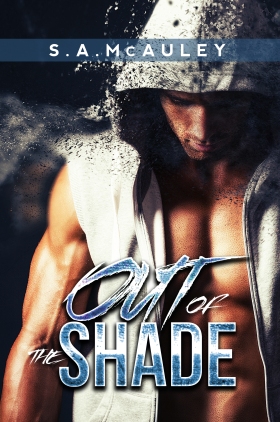 Jesse Solomona has always tried to be the perfect straight guy—a cocky sports fan who drinks more than he did in his fraternity days and an expert at one-night-stands. That he hooks up with just as many men as he does women is a secret Jesse’s been hiding for years, fearful of losing his family and tight group of friends. He’s a Kensington boy—a group of guys that grew up in the same neighborhood and somehow all ended up back in their hometown. They, and his family, are the only things that still matter in his otherwise soul-sucking life.

Chuck Dunn, a tattooed and pierced sports photographer, has refused to step back into the closet since he was disowned by his family, but he keeps choosing men who can’t fully be with him. Finally free from a long-term relationship he should’ve ended years ago, he quits his high-profile gig in favor of getting back to the art of sports photography—documenting a local boxing club that works with at-risk teenagers. He may not have the same swagger anymore, but he’s working to be happy with who he is.

When Chuck joins one of the Kensington boys’ community center sports leagues, Jesse’s self-imposed rules are systematically demolished. But there’s one barrier Jesse can’t find the strength to break through—coming out to the other Kensington boys. Chuck knows hooking up with Jesse is a bad idea. Falling for him even worse. But he can’t stay away.

Chuck is damaged by his past. Jesse is frightened about his future. But, together, they may just be able to come out of the shade.

If there was any sight that could bring a grown man to tears, then Jesse was witnessing it right now. Every person in Wellings Field was on their feet as they honored the local firefighters who’d battled a massive blaze downtown a few weeks back, losing two of their own. A group of four fighter jets did a low fly-over, wingtips seemingly skimming over the rim of the open-air stadium, breaking the moment of silence with a thunderous roar.

“Wow,” Jesse breathed out, goosebumps rising on his skin. The Wellings’ fly-overs were legendary—a tradition designed to bring the community together in tough times—but experiencing it first-hand was a whole other level of emotion.

Chuck bumped up against him, eyes bright. “I know, right?”

Then the stands were shaking from thumping feet and the roar of the crowd as both teams took to the field. Neither of them were Jesse’s favorite, but he couldn’t give a fuck. They were seated directly behind the Bay’s home bench and Jesse was having a hard time focusing any of his attention on the game in favor of watching the players, coaches, and crew on the sidelines.

“How many of their asses are you checking out?” Chuck asked, his gaze locked to one of the wide receivers.

Jesse chortled. “All of them. They’re right the fuck there! I don’t know how you kept your lens focused on the field when working.”

“‘Cause there’s nothing better than those asses, in those tight uniforms, plus sweat and grunting and men piling on top of other men. The real action is when they’re getting down and dirty on the field.”

Chuck lifted his beer. “Cheers to that.”

“You miss it? Documenting pro games instead of a local boxing club?”

Chuck shrugged. “Yes and no.”

He waited for Chuck to continue, but when he didn’t, Jesse pressed. He wanted to hear more. “I mean, I get the benefits part. That’s easy to understand. But what was it that made you want to do sports photography for a living?”

“I never really planned it, to be fair. I always loved the camera—the mechanics of it, and the high of catching something in my lens…. A second that would never be repeated in the exact same way ever again. That I focused on sports photography was all because of one of my exes. I started documenting the rise in his career and when he went pro things just fell together after that.”

Jesse was stunned. “You dated a pro?”

“Yeah, we’re not having that conversation right now. Later.” Jesse arched an eyebrow and Chuck laughed. “It’s not a big deal. This just isn’t the place to be throwing that name out there.”

Jesse scanned the sidelines. They were surrounded by a hell of a lot of cameras, microphones, and people. “So, can you tell me what you don’t miss?”

“Being a part of the media is a game unto itself, know what I mean? It’s all about advertising revenue and beating out other outlets for the story. I’ve never been a cut-throat type of person. I could have made a hell of a lot more money if I was.”

Jesse considered that. He and Chuck hadn’t talked salaries or retirement funds. They barely talked about who picked up the tab. Jesse had to assume that Chuck was pretty well set financially. “But you’re comfortable enough to have the freedom to do what you want now.”

“I don’t need much in life. Roof over my head, good food, a fast computer….” Chuck knocked his knee against Jesse’s. “Warm body to share it with is all the bonus I need.”

Jesse stilled, realization washing over him—but he wanted that to be different.

Chuck glanced at him, eyes narrowing. “You okay?”

Jesse shifted on the bench, bumping up against Chuck and soaking up the warmth of having him at his side.

Chuck wasn’t just a warm body to keep him company, though. He was a friend and Jesse…. Fuck. Jesse wanted him to be more.

Chuck grinned, his dimple deepening with his carefree smile.

Fuck the fighter jets, that was a sight to bring a grown man to tears.

Celebrate the release of OUT OF THE SHADE with author S.A. McAuley by entering this giveaway for a chance to win 1 of 3 $10 Amazon Gift Cards!
*click the graphic to get to the rafflecopter*

Author S.A. McAuley is a wandering LGBTQ author who sleeps little and reads a lot. Happiest in a foreign country. Twitchy when not mentally in motion. Her name is Sam, not Sammy, definitely not Samantha. She’s a dark/cynical/jaded person, but hides that darkness well behind her obsession(s) with shiny objects.