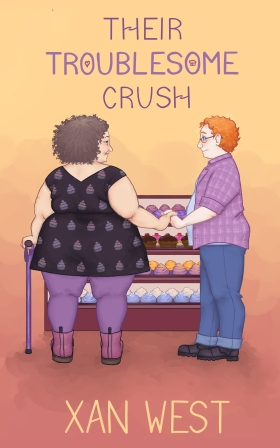 In this queer polyamorous m/f romance novella, two metamours realize they have crushes on each other while planning their shared partner’s birthday party together. Ernest, a Jewish autistic demiromantic queer fat trans man submissive, and Nora, a Jewish disabled queer fat femme cis woman switch, have to contend with an age gap, a desire not to mess up their lovely polyamorous dynamic as metamours, the fact that Ernest has never been attracted to a cis person before, and the reality that they are romantically attracted to each other, all while planning their dominant’s birthday party and trying to do a really good job.

Writing An Ownvoices Romance with a Demiromantic MC

One of my first steps in developing Their Troublesome Crush was a brainstorm with a friend who was also polyamorous, about the kind of polyamory representation we rarely see in romances, the kind of thing that feels so common in our lives but we rarely see on the page. Several key story elements emerged from that brainstorm, but I want to focus on one of them, in particular.

We were discussing how the mutual crush in the story could resolve to something that illuminated split-attraction, as we’d never read a polyamorous romance that talked about it. So, maybe it could resolve to a romantic relationship that wasn’t sexual. Or there was kink attraction and no sexual attraction but maybe there was aesthetic attraction. We riffed on that for a bit, tossing phrases around like “I know I love you like family but wow your hair looks pretty.” And then my friend said something like…or maybe it wouldn’t end up being a romantic crush, but could be a squish, a friend crush.

Which is when I blurted out a question asking about the difference. After they offered definitions, I realized I wasn’t communicating clearly. So I tried other words: I have a super hard time figuring out whether I have a friend crush or a romo crush on someone.

Working through that conversation, and thinking about it afterwards, solidified for me that this kind of confusion about romantic attraction and struggling to figure out whether I was experiencing it wasn’t just because I was autistic, but was also a thing that some aro-spec folks experience. That it might be another reason to think of myself as aro-spec.

It wasn’t like that was news. I’d been questioning on both the asexual and aromantic spectrums for over a year, had been reading a bunch of stuff and having a lot of conversations. But this felt like a moment of recognition, that this aspect of my experience was an aro-spec experience, which meant that yeah I was probably aro-spec. It landed differently, got inside with more solidity. Holding it in that way felt different, less overwhelming, less scary. Or maybe I was more ready for it to be solid, to hold it.

Their Troublesome Crush was already wrapped up in all these feelings for me anyway, so I decided that I would let the MC have some of my own confusion. I would give Ernest the aro-spec identity that I thought was probably my own: demiromantic. I would make his confusion around the attraction be the driver for the romance arc. With this choice, it felt like something clicked into place.

To be clear, Ernest’s demiromantic identity is not a source of conflict between characters. Instead, Ernest struggles to figure out his potential crushy feelings for Nora and what they mean. Are they attraction? If so, what kind of attraction? That struggle and confusion and his frustration with his feelings are at the core of the book, the center of the internal conflict.

That choice, to make the MCs confusion about the crush be the central problem the story resolves, created a very different kind of romance arc, one that was decidedly demiromantic. I can understand that more clearly in hindsight than I did at the time.

In order for me to draw from my own experience and write a demiro character getting a deeply demiro romance arc, I needed to create a character who hadn’t built his life around masking his reality, the way I had until recently. I needed to write, in essence, character who let himself openly be autistic and demiro. Who already lived his life that way. Who wasn’t working hard to get there, wasn’t trying to self-accept and break lifelong habits of masking. But instead, a character who had already been doing that work for years and was fairly comfortable living that way.

When I was grappling with revisions, I was at a crossroads. It became more real when considering early reader feedback, that Their Troublesome Crush had a rather different tone and arc than many readers might expect from a friends to lovers m/f romance novella. The story highlights how difficult it is for Ernest to perceive and parse out his potential attraction, how frustrating and upsetting his potential attraction and the changes it might spark are for him, how much his thoughts about this are more of a set of interlocking spirals than a straight line, how he needs to take his time to process these things and struggles to read Nora and whether she’s flirting. His crush is truly troublesome for him, and he moves rather slowly around it. The pacing was different from many romance arcs, as we watch Ernest eke his way through all his circular and conflicted thoughts and feelings, in layers. The story moves at Ernest’s pace.

Being autistic and demiro myself, I went through my own spirally slow process around the revisions. How much did I want to embrace this bent of the story? Did I want to try to change it to make it more closely fit romance reader expectations? I wrestled with these questions as much as Ernest wrestles with his crush in the story, if not more. In doing so, I was wrestling with my own identities and fears, with how much I wanted to put of myself on the page, how deeply autistic and demiro I wanted to make the story.

I eventually circled back around to where I often land. The conclusion that what makes my fiction better is pushing myself to be brave in revisions, to go more deeply and intensely in the directions that honor who the characters are and illuminate the details of that experience, especially if those directions scare me. Revisions are the place where I go deep into vulnerability, lean into the places that feel risky.

In this revision, I made the story more explicitly and clearly demiro, in structure, in the way Ernest talks about his experience and sorts through his attraction. I let my demiro MC drive the romance arc, set the pace. I matched that by making Ernest even more explicitly and clearly autistic, having him mask less, having his thoughts look more like my own, having him work through things in layers and manage his reactions as he went, not pushing him to have conversations in person that he’d prefer to have via text. Ernest’s demironess and autisticness feel inextricable, giving room for one gave room for the other.

Their Troublesome Crush is a light, cute romance with cozy food details and chosen family and a rather sweet D/s dynamic. While Ernest is grumpity and out of sorts about his crush, the story itself doesn’t feel angsty. I seem to have had most of the angst for him, while writing it! 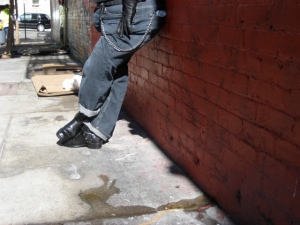 Xan West is the nom de plume of Corey Alexander, an autistic queer fat Jewish genderqueer writer and community activist with multiple disabilities who spends a lot of time on Twitter.

Xan’s erotica has been published widely, including in the Best S/M Erotica series, the Best Gay Erotica series, and the Best Lesbian Erotica series. Xan’s story “First Time Since”, won honorable mention for the 2008 National Leather Association John Preston Short Fiction Award. Their collection of queer kink erotica, Show Yourself to Me, is out from Go Deeper Press.

After over 15 years of writing and publishing queer kink erotica short stories, Xan has begun to also write longer form queer kink romance. Their recent work still centers kinky, trans and non-binary, fat, disabled, queer trauma survivors. It leans more towards centering Jewish characters, ace and aro spec characters, autistic characters, and polyamorous networks. Xan has been working on a queer kinky polyamorous romance novel, Shocking Violet, for the last four years, and hopes to finish a draft very soon! You can find details and excerpts on their website, and sign up for their newsletter to get updates.