Hello everyone! I’m thrilled to welcome Anna Zabo and their characters Mish and David on Queer Books Unbound to celebrate the release of Reverb – the conclusion to the fabulous Twisted Wishes series! 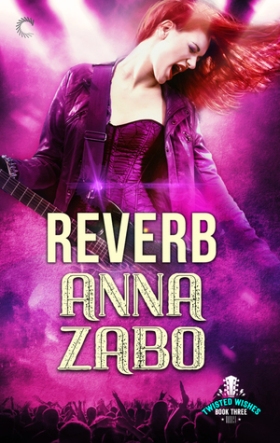 The tougher they are, the harder they fall.

Twisted Wishes bass player Mish Sullivan is a rock goddess—gorgeous, sexy and comfortable in the spotlight. With fame comes unwanted attention, though: a stalker is desperate to get close. Mish can fend for herself, just as she always has. But after an attack lands her in the hospital, the band reacts, sticking her with a bodyguard she doesn’t need or want.

David Altet has an instant connection with Mish. A certified badass, this ex-army martial arts expert can take down a man twice his size. But nothing—not living as a trans man, not his intensive military training—prepared him for the challenge of Mish. Sex with her is a distraction neither of them can afford, yet the hot, kink-filled nights keep coming.

When Mish’s stalker ups his game, David must make a choice—lover or bodyguard. He’d rather have Mish alive than in his bed. But Mish wants David, and no one, especially not a stalker, will force her to give him up.

This book is approximately 105,000 words

One-click with confidence. This title is part of the Carina Press Romance Promise: all the romance you’re looking for with an HEA/HFN. It’s a promise!

Hi Mish, hi David! Welcome to Queer Books Unbound – we’re super excited to have you with us today! Glad you could find the time in your busy schedule to sit down with us.

Please introduce yourself to us (for those who are reading this but don’t know the Twisted Wishes series yet).

David: Ray would call you more than a backup singer, darling. And he’d probably say you’re the heart and soul, too.

Mish: Yeah, he would. But he’s the actual heart, soul, and talent behind the band. *She holds up her hands* And yeah, I know he’d argue that, too. Besides, you should introduce yourself, David.

Mish: Ray’d argue with that, too.

David: Probably. Basically, I coordinate security for the band. There are some bigger, more muscular folks protecting them.

Mish: But you’re no slouch.

What do you admire about each other the most and what personal qualities would you “take” from the other one if that were possible?

David: Wow, huh. I guess the thing I admire the most about Mish is her beauty. And I don’t mean that in terms of physicality, though, you know…

*Mish mock punches him in the shoulder*

She just has this approach to life that’s beautiful. Like, each day is worth living and experiencing to its fullest, no matter what happens. Everything is vibrant and alive, and she gives so much to the people around her, including me. I don’t know how to describe that but “beautiful.”

I think if I could take a bit of that and be less grumpy sometimes, I would.

David: You see the best in me. I am so grumpy.

*Mish waves his words away* The thing I most admire about David is his ability to be himself. Which might be a cop out answer, I don’t know! But he’s never afraid to put himself out there, wholly and completely. I agonize over how I’m going to be perceived if I do what the fuck I want to do and what the backlash might be. And he just—does.

David: To be fair, I agonize about that stuff too, then I say fuck it and give a bunch of mental middle fingers to the world. You just don’t see that part. So I think we probably have similar approaches.

Mish: We’re a lot alike. I think if I could take a quality from David, it would be his watchfulness. I can barrel straight into things without looking, and I think David is more careful.

David: Sometimes. I have my blind spots.

This is probably more of a question for Mish, but perhaps you also have something to say about it David. What do you think is the best part and what is the hardest part of playing in a successful and famous band?

Mish: The best part is the music and the concert and the fans. There isn’t anything better than being on stage, and I still can’t get over how the fans respond to our music. It makes my heart feel so full, I think it’s going to burst half the time.

I think the hardest part is dealing with the some of the media. They’re relentless in what they want from us. All the dirt. All the details. The private stuff. Just because we’re public figures, it doesn’t mean everything is for consumption, you know?

David: That’s the hardest part, for sure. Some media folks will work with you, but there’s a lot of money out there for candid photos and private info. And that kind of exposure can lead to issues. Though, like Mish said, the fans are generally wonderful. But it only takes one that isn’t to cause heaps of trouble.

More and more queer people have a presence in the media and other industries. What do you find the most challenging about being a queer person who gets scrutinized closely? What do you hope to achieve in terms for other queer people?

Mish: My frustration is generally with media trying to put me into a certain box. They really seemed to want to label me as straight or gay, but never as bi or pan. Though, mostly, they wanted me to be straight, I think. It’s the whole woman can’t own their own sexuality bit, I guess.

I hope that fighting against that gives young queer people the knowledge that they can be who they want to be, no matter what box someone else wants to stuff them into. The whole band feels that way, I think.

David: It’s odd for me. I generally think the media is… I don’t want to say nicer… maybe a little less sensationalistic when it comes to transmasculine people. There’s still a lot of cis-oriented explanations out there, and sometimes you’re playing gender 101 with folks who need, I don’t know, a pre-gender class kinda like folks might need a pre-algebra class. They’re just yards behind on understanding sex and gender and biology and what makes us who we are. That’s frustrating, because you end up answering the same questions all the time and there’s so much focus on my junk. And you know, only people who are gonna get up close and personal with my nether need to know. The rest of you all don’t need to know.

Oh. I got on a rant. Sorry. That happens.

What I hope to achieve is showing younger trans people you can become an older trans person. Like there’s trans life beyond 20s and 30s. Some people don’t even transition until their 40s and that’s fine! There’s no too late. And you can be happy and healthy. And there’s joy and love there, too.

Holiday movies, yes or no?

Something that relaxes you?

Anna Zabo (they/them) writes contemporary and paranormal romance for all colors of the rainbow. They live and work in Pittsburgh, Pennsylvania, which isn’t nearly as boring as most people think.

Anna is non-binary and uses they/them pronouns and prefers Mx. Zabo as an honorific.

Anna grew up in the wilds of suburban Philadelphia before returning to their ancestral homelands in Western Pennsylvania. They can be easily plied with coffee.