Today I’d like to talk about by new book, Ashore, the second installment in the sci-fi romance series, Staying Afloat. It focuses on the (mis)adventures of Matt Spears, the captain of the smuggler spaceship Lady Lisa, and his crew. This time, when the ship’s engineer, Valeriy Sokolov, gets on the local crime lord’s bad side, it’s up to Matt, Ryce, and Tony to save him and get their ship flying again, before time runs out for all of them. Amid the crisis, Matt and Ryce learn to navigate their fledgling romantic relationship, but with some many forces threatening to pull them apart, staying together might prove too much for either of them to handle.

Found family dynamic is one that I particularly enjoy exploring in my writing, as it probably holds the strongest promise of hope—and hope is what lies at the core of all my stories. Consequently, one of the major themes of Ashore is the value of true friendship and family. And as the characters discover, “family” doesn’t necessarily mean sharing the same DNA. In fact, sometimes your biological family lets you down. Sometimes relative can be dismissive of your dreams, your beliefs, your identity. Sometimes they can be physically or physiologically abusive. Sometimes there’s no other choice but to cut all ties, even if it hurts.

Matt Spears, the main character of the series, knows this all too well. He’d even changed his last name as an act of independence from his overbearing father, a prominent military leader. Everyone in the Federation knows who Admiral Cummings is—but no one is going to believe Matt Spears, the captain of a small smuggling ship, is his son. After having a falling out with his parents and his sister over his less than flattering views about the military and effectively “ruining” his career as a Fleet officer, he’d been estranged from his family for years. Luckily for Matt, he was able to fill that void by creating a strong bond with the crew of his ship, Lady Lisa.

This little ragtag group flocked together by chance, all of them trying to carve out some sort of life for themselves after experiencing personal tragedies and loss. Tony, the medic and the first mate, had been accused of embezzlement and lost the custody of her child in an ugly divorce. Val, the engineer, had sworn revenge against the men who killed his beloved wife. And now they’re also joined by Ryce, who is still trying to come to terms with his less than honorable discharge from the Fleet which signified the end of his promising career. All of them yearn for a place they could call “home”, for a sense of belonging after being cast adrift by circumstances and by their own actions.

They are all very different people, but they learn to trust and find strength in each other when all the world turns against them. And in Ashore, when one of them finds himself in grave danger, they rally to save him, risking their own lives in the process—because being a family means sticking together and having each other’s backs through thick and thin. Their dedication and loyalties are tested throughout the story, but it’s their love and friendship that keeps them all afloat.

Where can readers find out more about you and your books?

I have a website where I post all the information about my books and upcoming releases, as well as some extra content for my readers. I’m also pretty active on Twitter, talking about books and posting snippets of my works in progress, so if you ever want to chat, follow me there! 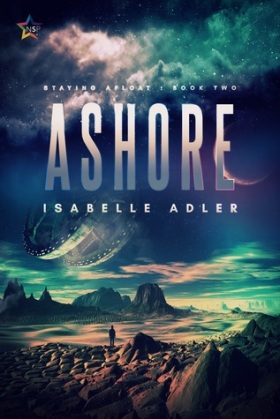 You can only put the past away for so long.

This had never been truer for the crew of Matt’s ship, the Lady Lisa. Even as their engine suffers a critical malfunction and Matt scrambles to fund the costly repairs, Val, the ship’s reticent engineer, unexpectedly comes face-to-face with a deadly ghost from his past. Now it’s up to Matt, Ryce, and Tony to rescue him, even if it means breaking the law and striking an uneasy bargain with a local black-market kingpin—but what if this time their best efforts simply aren’t good enough?

And it might be that Val isn’t the only crew member Matt risks losing when his budding relationship with Ryce unexpectedly runs aground. With their love and commitment put to the test, Matt and Ryce must rally to save their friend and to keep their ship afloat, but in a race so desperate there might not be any real winners.

A voracious reader from the age of five, Isabelle Adler has always dreamed of one day putting her own stories into writing. She loves traveling, art, and science, and finds inspiration in all of these. Her favorite genres include sci-fi, fantasy, and historical adventure. She also firmly believes in the unlimited powers of imagination and caffeine.