Rebound: The book I wasn’t going to write

I never planned to write a hockey book.

It’s not that I have anything against hockey. Never have. I was just kind of… indifferent to it, much like I am with tennis or basketball. Love football (even though I only understand about 13% of it). Enjoy baseball. Gnash my teeth every four years at the lack of televised dressage and fencing during the Olympics. Hockey was kind of a “sure, I’ll go to the game with you, but you might have to fill me in on what’s going on” sport for me.

And that’s exactly what happened.

You see, I spend a lot of time with Anna Zabo, and Anna Zabo is a hardcore Pittsburgh Penguins fan.

Last October, prior to going to GRL, I went to Pittsburgh to visit. Since they had to miss a game in order to come pick me up at the airport, it seemed only fair for me to go with them to another home game while I was in town. And… it was fun. And of course, as soon as people realized I was going to a hockey game: “Please write a hockey romance!”

I laughed it off and said it probably wouldn’t happen, and I’d leave the hockey romances to authors like Anna, RJ Scott, Avon Gale, and Piper Vaughn. But you never know, right? Plot bunnies find me in the strangest places.

During the game, I played up the fact that I’d never been to a hockey game by live-tweeting my cluelessness. Such as, for example, posting a photo of the Zambonis with “Oh, I get ice hockey now: one ice tractor chases the other and if the second one passes the first, it wins.”  Henceforth, ice hockey was dubbed “the ice tractor races.”

The game was a lot of fun, even if the Penguins did lose, and okay, so hockey is pretty cool after all. Plus I had Anna explaining the finer points to me, so I had a somewhat solid grasp on the game by the end. And there really is something to be said for, you know, hockey players.

So I’m not gonna lie—some plot bunnies did start brewing. In fact, I came up with one the next day while I was out with Anna. The conversation literally went: “I don’t really have any hockey ideas. Unless I hook a hockey player up with… oh [expletive].” That particular bunny is still percolating.

A few weeks after I returned to Spain, where I was living at the time, there came a perfect storm of plot bunny catalysts.

One, I was stuck on my work-in-progress. Like, stuck. I was around 40K into it, and something was violently wrong with the plot, and I knew it was going to require massive rewrites, scrapping large parts of the outline, and possible even starting over from scratch. I had hit the wall. Though there was a deadline looming, I know from past experience that this is a situation where I need to put the book aside for a while, throw myself into something completely new, and write that from start to finish before returning to the problem book. So I needed a brand spanking new plot bunny.

Two, the NHL announced that the new team would be in my hometown: Seattle.

Naturally, Anna and this very blog’s Annie took that opportunity to gang up on me and tell me I should totally write about some hockey players in Seattle, and why wasn’t I writing a hockey romance, and c’mon write a hockey romance.

Three, I replied, “Haha, nah, I’m not going to write a hockey romance.”

So there I was, in dire need of a fresh plot bunny to Ctrl+Alt+Del my brain before I returned to my disaster of a work-in-progress, being egged on by Anna and Annie on social media, and saying the fateful “I won’t write…” words out loud.

Thus, it was no surprise when from the sky fell Asher Crowe, the star center of my Seattle-based hockey team (later named the Seattle Steelheads by Petra Rajgelj in a contest I held on social media). Then came the man who would be his love interest, Officer Geoff Logan, the forty-something single dad and retired-Marine-turned-cop who suddenly finds himself getting to know the hockey player he’s been crushing on since forever.

From there, the hockey romance I wasn’t writing turned into the hockey romance I’d written, (hockey-checked by Anna Zabo since they know more about the sport than I do) and on March 27th, you can get your hot little hands on Rebound. (Also it’s $0.99 until April 1st!)

(For the audiobook fans, expect this one to drop sometime this summer, narrated by Michael Ferraiuolo and Nick J. Russo!)

(Oh, and that book I was struggling with before I didn’t write Rebound? It’ll be out next month.) 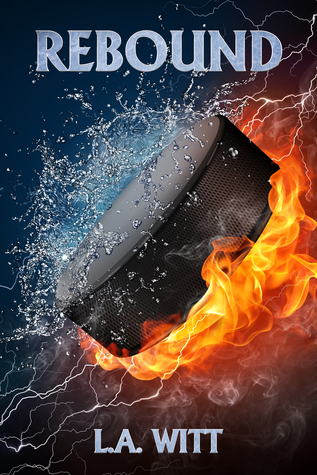 A forty-something single dad, a twenty-something hockey star, and a whole lot of baggage. No, this couldn’t possibly blow up in their faces.

Officer Geoff Logan has his plate full. His cop’s salary and Marine retirement aren’t enough to make ends meet. He’s got war wounds and demons that are in it for the long haul. His teenagers are, well, teenagers, plus they’re pissed that he left the boyfriend they loved. Can’t a guy catch a break?

Seattle Steelheads center Asher Crowe has it all. A seven figure salary. A literal house on a hill. A stable, loving relationship with an amazing boyfriend. At least, that’s what the world sees. Behind closed doors, he’s been living in a private hell, and when he finally works up the courage to end things, his boyfriend refuses to go quietly.

One call to the cops, and suddenly Geoff and Asher’s paths cross. But is the connection between them simple chemistry? Kindred spirits? Or just a pair of lonely hearts looking for a hot distraction?

And even if it’s more than physical, is there really a future for two men from such vastly different worlds? Especially when the past comes knocking?

L.A. Witt is an abnormal M/M romance writer who has finally been released from the purgatorial corn maze of Omaha, Nebraska, and now spends her time on the southwestern coast of Spain. In between wondering how she didn’t lose her mind in Omaha, she explores the country with her husband, several clairvoyant hamsters, and an ever-growing herd of rabid plot bunnies. She also has substantially more time on her hands these days, as she has recruited a small army of mercenaries to search South America for her nemesis, romance author Lauren Gallagher, but don’t tell Lauren. And definitely don’t tell Lori A. Witt or Ann Gallagher. Neither of those twits can keep their mouths shut…

L.A.’s backlist is available on her website, and updates (as well as random thoughts and the odd snarky comment) can be found on her blog or on Twitter (@GallagherWitt).