Not Dead Yet by Jenn Burke released yesterday and today I am thrilled to welcome her on Queer Books Unbound!

I haven’t been quiet about my love for this book and recommended it to everyone I thought would love it too. (I just want everyone to read it because it’s so, so special to me. It’s perfect if you love slow-burn or second chances stories! Plus you get the best snarky banter! ;))

I reviewed Not Dead Yet >here<. And we recently had her over as part of our blog anniversary celebrations with an interview about upcoming books, writing rituals and also her fave scene of Not Dead Yet. 😉 You can find the interview >here<. (Don’t miss the giveaway for a copy of The Gryphon King’s Consort that is still open.)

Whodunit? Not Who I Thought!

One of the reasons I used to love writing a story without a plot or a plan is because I enjoyed discovering where my imagination would take me without any foreknowledge on my part. I might have a general idea where the story was going to go, but the twists and turns it would take to get to the final destination were all a mystery until they appeared on my screen.

As I’ve evolved as a writer, that method doesn’t work for me anymore. I have deadlines and quotas to meet and I don’t have time to take a wrong turn in my plot to see where I end up, because chances are, I’ll have to backtrack and rewrite. So I’ve adopted new methods of writing—doing an extensive plot and a synopsis—and they have been working for me very well.

I actually sold my latest release, Not Dead Yet, on synopsis to Carina Press. That means that I didn’t have a full manuscript—I had a plot, a synopsis, a few sample chapters, and a series outline. Carina Press bought the series based on this package and once I signed the contract, I had to start work on finishing the first book.

My plot was all thought out. I don’t know why, but when I write out my plots, I number every paragraph (they tend to be a single plot point). My plot for Not Dead Yet had 62 numbered points. One of those points detailed explicitly who the main bad guy was, to be revealed at the climax of the book.

It made perfect sense.

The more I looked at it, the more I liked it. My subconscious was completely on the ball with that reveal. It meant I had to go back and rejig some earlier scenes and add some others, but at the end, it felt right. And hey, I knew no one would suspect that person because I sure hadn’t. Thankfully, my editor and publisher said nothing about the deviation from the synopsis I originally submitted.

And that’s the story of how I didn’t even know who did it in my first-ever whodunit mystery. 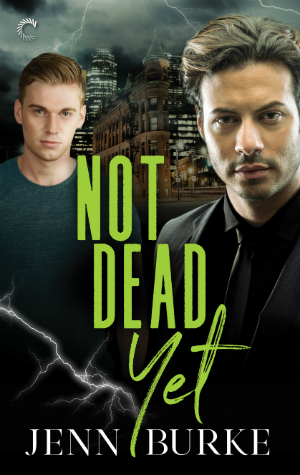 Dying isn’t what it used to be.

Wes Cooper was dead. Then he wasn’t—though he’s not exactly alive, either. As an immortal not-ghost, he can transition between this world and the otherplane, which makes him the perfect thief for hire. For seventy years he’s made a “living” returning items to their rightful owners, seeing his fair share of the bizarre in the process. But he’s never witnessed murder. Until now.

His latest mission brings him more than he bargained for: a very-dead actor who is definitely going to stay that way. It’s just Wes’s luck that his ex-boyfriend, Detective Hudson Rojas, is assigned to the case. Hudson broke Wes’s heart years ago—and could again, given he’s rocking a hot silver-fox look that shouldn’t be legal.

As they work together to track down the murderer before anyone else gets hurt, it becomes clear Wes and Hudson have unfinished business. And when a secret Hudson’s been keeping threatens more than just their happiness, it might mean the end of their not-life together—permanently.

Jenn Burke has loved out-of-this-world romance since she first read about heroes and heroines kicking butt and falling in love as a preteen. Now that she’s an author, she couldn’t be happier to bring adventure, romance, and sexy times to her readers.

Jenn is the author of The Gryphon King’s Consort from Dreamspinner Press and the co-author of the critically acclaimed Chaos Station science fiction romance series (with Kelly Jensen) from Carina Press. She’s also the author of Her Sexy Sentinel, a paranormal romance from Entangled Publishing.

She’s been called a pocket-sized and puntastic Canadian on social media, and she’ll happily own that label. Jenn lives just outside of Ottawa, Ontario, with her husband and two kids, plus two dogs named after video game characters…because her geekiness knows no bounds.