Moon Illusion, the third book in my werewolf series The Better to Kiss You With, focuses on Nathan—a human whose world has been upended by learning about the existence of werewolves, and who is trying his best to adjust to that new reality.  After finding the body of one of his neighbours, a man killed under mysterious circumstances, Nathan is more convinced than ever that werewolves can’t be the only supernatural thing out there, and he won’t rest until he discovers the truth.

The problem is that his werewolf boyfriend Cole swears up and down that there are no other movie monsters lurking in the darkness.  But does Cole know the whole truth?  And if he did, would he tell Nathan?

The following scene is an outtake from Moon Illusion.  I was having trouble figuring out how Nathan would discover his neighbor Jag’s body (and in what state!) so is one of the early versions I tried—affectionately titled “Werecrows” in my notes 😉

Nathan’s phone buzzed in his pocket as he neared his apartment.  He was exhausted enough that he was tempted to just ignore it, but the now ever-present worry—what if it’s an emergency?—had him reach into his jeans.

A picture text from Dee.  Her flaunting the aforementioned two-scoop double chocolate raspberry chunk, this time with what looked like added chocolate drizzle and flakes, with a good-natured Ryn sticking their tongue out in the background and holding a single-scoop tiger stripe topped with gummy bears.

When do you ever not? Nathan replied.  An ellipsis bubbled up as Dee typed a response.  Focused on the screen, Nathan continued forward on autopilot.

It wasn’t until he came around the building, planning to enter through the parkade, that he looked up, startled, by the growing cacophony.

Crows, over a dozen, with more arriving by the second, ringed the alleyway.  Nathan stared.  The noise was deafening, a discordant chorus of shrieks that raised the hair on his arms and sent a chill of foreboding down his spine.  He slipped his phone back into his pocket, no longer caring about Dee’s reply.

Go back, the voice inside him urged.  Go through the front, forget about this.  Good advice, he knew.  Just as he knew he had no intention of following it.

A hand lifted above his eyes to shield them from the glare of the sun—even with his sunglasses he was forced to squint as he looked up at the birds—Nathan cautiously moved forward.  There was a centre to the circle of frantic crows, arraigned as they were in a clear ring.  He wanted to know what was in the middle.  What drew them.

As far as he could see it was nothing unusual.  A car that looked familiar, its silver paint glittering in the sun.  Nathan had seen it in the parkade before, enough times to be confident that it belonged to someone else in the building.  It sat parked at the top of the driveway, and was, as far as Nathan could see, empty.

That was worse, somehow, than if a person had been in the driver’s seat.  Nathan swallowed against the metallic taste of fear in his throat, and balled his clammy hands into fists.  It’s just birds, he tried to convince himself.  Just because he’d never witnessed this kind of behavior before, just because the black shapes swirling above him carried a distinct air of menace, didn’t mean that there actually was any menace.

Breath shallow, black dots joining the crows that danced in front of his eyes, Nathan rounded the side of the car.

The scene didn’t make sense for a second.  The car’s back door hung open.  A metre or so away something large lay crumpled against the ground.  Nathan’s eyes wouldn’t focus on it, not properly.  They fixed instead on a crumpled paper bag; the logo of a local fast food joint stared cheerfully up at him.  Between the bag and the larger shape sprawled something black and winged and feathered; a crow identical to the ones that spiraled, screaming, above.  Only this one was silent and still.

The form behind the body of the crow began to take shape.  A brown arm, a thin gold bangle glinting in the sun.  The rubber sole of a shoe.  A pair of eyes that stared wide and sightless from a face gone ashen.

Jake.  No, not Jake.  Something similar though.  Jag.

Like his dream the night before, Nathan’s legs crumpled under him.  He barely felt the pain as his knees hit the ground, or the burn of his skinned palms against the hot concrete when he moved on instinct to catch himself.

“Jag.”  His voice was a croak, lost in the clamor of the crows.  His vision wavered, Jag becoming Cole becoming a teenaged girl becoming Dee becoming Jag again.  A low moan ripped from his throat.

“Hi babe,” Cole’s voice started warm and fond in Nathan’s ear, but the fondness turned swiftly to confusion.  “What’s that sound?  Where are you?”

“He’s dead.”  It came out a whisper.  If it wasn’t for Cole’s superhuman senses, Nathan wasn’t sure he’d have heard it over the crows. 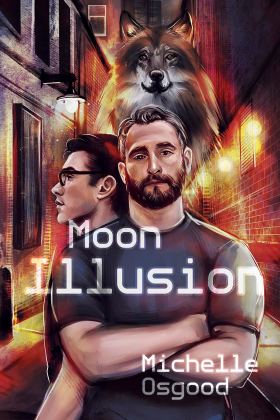 Nathan Roberts was just your average polyamorous librarian living in Vancouver until his best friend, Deanna started dating a werewolf. While hosting the small pack in his apartment while they hid from the underground network of Huntsmen, Nathan enjoyed a casual fling with Cole, the pack leader’s brother. But now, he may just be falling for him.

When his neighbor is murdered, Nathan is convinced the death is linked to the supernatural, but Cole and their friends deny any paranormal connection. This leads to a fracture of trust in their relationship, and Cole’s pack is left to deal with an unknown killer on the loose. As Nathan pursues answers on his own, he must come to terms with the truth, and his feelings for Cole.

Michelle Osgood writes queer, feminist romance from her tiny apartment in Vancouver, BC. She loves stories in all media, especially those created by Shonda Rhimes, and dreams of one day owning a wine cellar to rival Olivia Pope’s. She is active in Vancouver’s poly and LGBTQ communities, never turns down a debate about pop culture, and is trying to learn how to cook.