The lovely Julianna Thorn is with us today to share a first look into her upcoming release Lake Lucky! The story is scheduled for a late February release!

“Gonna make me fall in love with you if you’re not careful,” Som murmured, fingers playing at his glasses.

“Why shouldn’t you?” Ian asked.

Som didn’t have a reply. He sat on the desk, knees set at Ian’s hips, warmth coiling and unfurling again in his gut. All those thoughts that have plagued him, that he was irresponsible, bad at relationships—what did any of it really matter when it was just the two of them, right here?

“What would change?” Ian’s breath feathered across Som’s neck as he glanced barely a kiss against it. “My situation’s still the same; so is yours. But we’ve got this connection…”

“Oh my God. I bet you were a real asshole in college.”

At his hips, Ian’s thumbs pressed deeper in. “How come?”

“God, I don’t know. Thinking about the moon landing.”

Som forced Ian to meet his eye, but Ian cracked that crooked grin of his. “Jokes still too dry, huh?”

Som’s brow met Ian’s shoulder in exasperation. “You gonna try to land a dirty pun every time you want to get laid?”

“You were having better luck with your bad seduction tactics.”

“They were pretty bad.”

“That makes me a moron. It doesn’t redeem you.”

Heat radiated through Ian’s shirt as they talked. It was tight, navy blue, tucked into his jeans the way it always was. Every brush of his hips against Som’s bare legs told a tale of searing want, warmth surging through his skin.

“I’m a multi-talented moron,” said Som, and Ian tipped his head in for a kiss.

Som had expected the heat. He hadn’t expected the sensuality. Ian kissed him slow, with no hurry, callouses grazing against Som’s skin under his shirt—and suddenly, with Ian’s lips doing their damndest to get Som to stop thinking at all, the argument for falling in love didn’t feel like such a burden anymore.

“I’m not asking you to change anything about your life,” Ian murmured, trailing his lips across Som’s jaw. He dipped Som’s head back, caressing his neck with an open palm. “I’m not trying to change what we’re doing in any way. I just think there’s no harm in staying open to the experience.”

Ian closed a hot, open kiss over the thrum of Som’s pulse, and it was all Som could do to keep the sound in his chest. “You sound so stupid saying that,” he said instead.

“You just don’t want to admit I’m right. You got something else going on?”

“You predict some obstacle to us getting together the way we have if we sink some feeling into it?”

“Uh—” Som did. There must have been some reason why—

“Then what’s the hesitation?” Ian’s mouth made its way along his throat, teeth scraping gentle against his collar, and the stubble that really brought the ‘sexy professor’ thing all together was suddenly the only sensation Som wanted against his skin.

“This,” Ian said, “has nothing to do with the kids.” His mouth had found his way back up to Som’s and coaxed a gentle, smiling kiss out of him, hands braced at Som’s face.

Som was delirious on him. Being treated like this was… He hadn’t felt it in a long time. “You just want me to fall in love with you so you can keep having your way with me on top of your desk.”

Ian grinned. “Among other places.”

“You’re like a shark,” Som said weakly. “Out for my blood or something, I—” 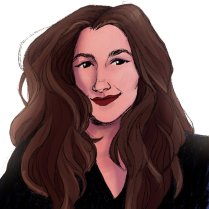 Julianna Thorn is a writer and editor living in Canada with a very large cat and a regular-sized human. When not writing elsewhere under other names, she likes video games, tabletop games, reading, and shouting at the sky. You can visit her website or her twitter.