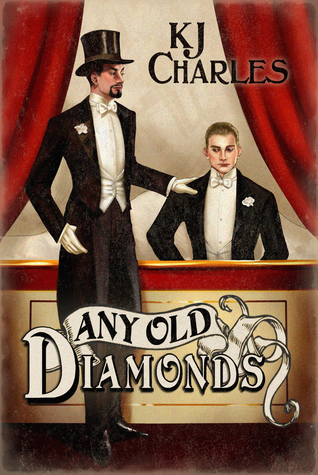 Lord Alexander Pyne-ffoulkes is the younger son of the Duke of Ilvar, with a bitter grudge against his wealthy father. The Duke intends to give his Duchess a priceless diamond parure on their wedding anniversary—so Alec hires a pair of jewel thieves to steal it.

The Duke’s remote castle is a difficult target, and Alec needs a way to get the thieves in. Soldier-turned-criminal Jerry Crozier has the answer: he’ll pose as a Society gentleman and become Alec’s new best friend.

But Jerry is a dangerous man: controlling, remote, and devastating. He effortlessly teases out the lonely young nobleman’s most secret desires, and soon he’s got Alec in his bed—and the palm of his hand.

Or maybe not. Because as the plot thickens, betrayals, secrets, new loves, and old evils come to light. Now the jewel thief and the aristocrat must keep up the pretence, find their way through a maze of privilege and deceit, and confront the truth of what’s between them…all without getting caught.

*I received a free copy of this book from the author

This book took me by surprise, but not in the way I expected.

I expected to love this book, because KJ Charles is an absolute favorite; her books are on that special shelf of “books you pull out for a 15th reread when life goes to shit.” I began this book 100% trusting the author and knowing I was going along for a ride.

A few chapters in, I wasn’t sure of a few things: I knew I was enjoying the book because it was 10:30 pm (which is late for me! I’m secretly 78 years old at heart) and I wouldn’t put it down. But I wasn’t quite able to put my finger on *why* I was loving it because I wasn’t 100% sold on Alec and Jerry. I couldn’t even say why. They definitely had chemistry (yessss). There’s probably nothing more maddening than a vague reviewer, but honestly, I couldn’t tell you or put my finger on what it was at that point.

And then it happened. The TWIST, which I shan’t spoil for you. Suffice to say I expected a twist, but not the twist we got. I was legitimately gripping my kindle and cursing Charles for being so good, so so good.

Perhaps this was what I was feeling–a slight disconnect between the characters that was necessary. That was layered because there’s both truth and untruth in all of their moments and even in the lovely process of them falling in love. I really feel like Charles outdid herself with the way she pulled off the layers she did to build to the revelations and to have the reader believe in a love story despite ALL OF THE THINGS I CANNOT SAY BECAUSE SPOILERS!

Of course, if we’re getting to the nitty-gritty, allow me to express a deep love for Charles’ gifts with wit, character depth, and atmosphere. I always feel like I am transported to whatever time and place her books are set. Really, the author is one of the best with historical fiction.

I have two quibbles with the book, which account for the .5 up there: first the transition from the twists and the aftermath and then the resolution and happily every after all kind of went rather quickly for me. I would have liked to linger a little more in the character/love development after the twist, since it did change some things for the characters. This isn’t a big quibble at all, more like, a wish.

Second, there’s a lot of small reference to people that I could *tell* must have been important, but I couldn’t tell if they were because they were historical figures and I just wasn’t clued in, or if they were past characters in her books. This did throw me off a bit because I wasn’t sure if understanding or following a tight plot with twists was dependent on or more deeply woven by knowing who they were.

Plot twist of my own: despite this, I loved this book so much I decided I needed to re-read all of Charles’ books I have, and then purchase a bunch of others. So I can now rest assured that those references were to past characters which I didn’t *need* to know to get anything in this book. It was a lot of fun to make those connections once I re-read Diamonds though.