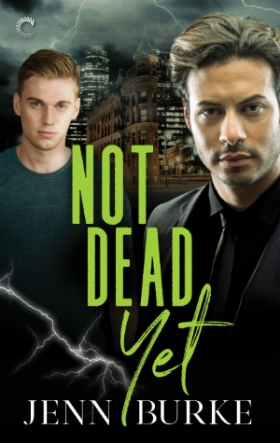 Dying isn’t what it used to be.

Wes Cooper was dead. Then he wasn’t—though he’s not exactly alive, either. As an immortal not-ghost, he can transition between this world and the otherplane, which makes him the perfect thief for hire. For seventy years he’s made a “living” returning items to their rightful owners, seeing his fair share of the bizarre in the process. But he’s never witnessed murder. Until now.

His latest mission brings him more than he bargained for: a very-dead actor who is definitely going to stay that way. It’s just Wes’s luck that his ex-boyfriend, Detective Hudson Rojas, is assigned to the case. Hudson broke Wes’s heart years ago—and could again, given he’s rocking a hot silver-fox look that shouldn’t be legal.

As they work together to track down the murderer before anyone else gets hurt, it becomes clear Wes and Hudson have unfinished business. And when a secret Hudson’s been keeping threatens more than just their happiness, it might mean the end of their not-life together—permanently.

Today I am here to rave about Jenn Burke’s Not Dead Yet! That book had been on my radar for a while – I eagerly awaited every #1linewed on twitter and gobbled up any bit of information she dropped on the writing process of the series, hoping she’d post another snippet of it. So of course I immediately requested it on NetGalley when I saw it was up on it. I was lucky that I didn’t have to wait long to be approved for it and – not kidding – I dropped everything to immediately start reading. I had a moment of “pleeease let me love this” right before I started and then I was already swept off my feet.

I’m not exagerrating when I say that I devoured Not Dead Yet and enjoyed every single minute of it. All while I was reading I thought I should slow down to savour the story more – but I could not resist. I needed to know what happened and how it ended. And for the two days it took me to finish the book I pretty much read whenever I could catch a minute to do so. (Sidenote: one of these days my boss will catch me sneak reading!)
Once I was finished though the story wouldn’t leave me alone. I kept thinking about Wes, Hudson and rest of the gang. I wanted to go back and read the book again already; I suspect there is a reread gonna happen sometime soon!

What I absolutely loved, loved, l-o-v-e-d about Wes and Hudson’s relationship was how much time they took to get to know each other again, to work through their past and to built up a foundation of trust again. Between the last time they saw each other and the beginning of the book are 33 years, so I felt like they needed that time – anything else would have felt rushed and also not helped to create a lasting relationship this time. Especially because they never were just lovers to begin with – they used to be best friends too before they split up – so I really appreciated Burke giving them the time to work through it. This also worked perfectly to let us readers get to know them individually and learn about their past – what happened when they were together but also what they went through after they broke up 3 decades ago.
I will admit that there were times when I was a bit frustrated and wanted them to just kiss already – but at the same time that sweet, delicious, anticipation made the book so much better and I think Burke found the perfect balance between too soon and not soon enough. I definitely think that those of you who love slow burn and second chance romances will love this.
I also want to mention how special it was to me as an ace reader to see Hudson not just being understanding but also being so respectful of Wes’s boundaries and I really appreciate how much care Burke took to include explicit consent in every intimate scene. That shit is my kryptonite and I wish we’d have more stories like that; and not just when one of the main characters is ace, but in general I want an aboundance of explicit consent!

While reading Not Dead Yet I realised that I sort of have a thing for thieves paired with cops like Wes – though he prefers the term recovery specialist -, or Aiden Maar (Fortitude Smashed) or Amory Vaughn (Heart of the Steal). Compared to Wes and Hudson trying to solve those murder cases and them falling in love (again) Wes’ professional life as “recovery specialist” does take a bit of a backseat in the story. Though it still created a bit of tension between him and law-abiding Hudson. Making for some awesome bickering and snarking.

Additionally to the main characters the side characters were freaking amazing and really helped to bring the story alive. Each of them felt like a real person, with hopes, personal motivations and fears.
I fell head over heels in love with sweet Evan. I liked the different dynamic between him and Wes and him and Hudson. And I hope that one day he will get his own spin-off story because if there is a character that desereves a happy ever after it’s him! And Lexi! She’s the kickass best friend everyone should have – like seriously, I wish I could jump into the book and be her bestie! I love her and can’t wait to see her again in book two!

Regarding the mystery aspect of the book I feel like I can’t say too much or I would spoil it – especially because a big part of why I love this was the guessing and speculating. Typically I don’t tend to be so invested in mystery stories, but Burke kept me on he edge of my seat. I CAN say however, that I 100% enjoyed that the mystery aspect was just as layered as everything else in this book. Burke not only crafted beautifully multidimensional characters, the mystery part was just as captivating. While I had the smallest of inklings about who was behind the murders, Burke still surprised me with the reveal and how everything was ultimately connected.

Burke easily managed to make me feel pretty much the whole spectrum of feelings while I read Not Dead Yet. I laughed out loud – the kind that lasts forever and you start giggling whenever you think of the thing that set you off in the first place. She made me tear up because I was so happy and excited for the characters but I also cried of sadness. She made me feel frustrated with Wes and Hudson but also feel compassion for them, I was afraid everyone wouldn’t be alright at the end of the sory and overall there was just so much love and excitement for reading a book and about a world I could get completely imersed in. What I’m trying to say is that I could relate to both Hudson and Wes so much that I felt like I was part of their lifes for a short time.

Surprisingly this was actually my first book by Burke – a fact I can’t actually comprehend because I’ve followed her on twitter for ages and I own several of her books. It definitely wasn’t my last though – and not just because I’ll gobble up the other two books in the series as soon as they’re released. I’m also excited to dive into her backlist titles.

Not Dead Yet ends with some questions answered and new ones being revealed and I am freaking excited to explore them in book two! This is for sure one of my favorites for 2019 – and the year hasn’t even started yet! I hope you pick up this book because it’s a gem and I’m so grateful that I got to read it.

*a copy of this was provided via NetGalley

Jenn Burke has loved out-of-this-world romance since she first read about heroes and heroines kicking butt and falling in love as a preteen. Now that she’s an author, she couldn’t be happier to bring adventure, romance, and sexy times to her readers.

Jenn is the author of The Gryphon King’s Consort from Dreamspinner Press and the co-author of the critically acclaimed Chaos Station science fiction romance series (with Kelly Jensen) from Carina Press. She’s also the author of Her Sexy Sentinel, a paranormal romance from Entangled Publishing.

She’s been called a pocket-sized and puntastic Canadian on social media, and she’ll happily own that label. Jenn lives just outside of Ottawa, Ontario, with her husband and two kids, plus two dogs named after video game characters…because her geekiness knows no bounds.