Hi everyone! We’re super excited to welcome C.M. Valencourt on From Top to Bottom Reviews today to celebrate their new release of From the Ashes. 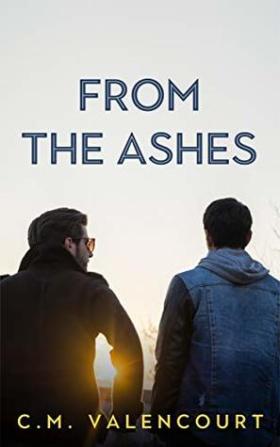 Hunter and Derek are at a fork in the road…

At their friend Justin’s funeral, once-best-friends Derek and Hunter meet again almost four years after their monumental falling out. Hunter kissed Derek, and Derek freaked out and chose a college on the other side of the country.

If they had a choice, both of them would walk away and never see the other again. Except Justin has given them a mission: an epic road trip to scatter his ashes all over the Midwest, complete with cryptic notes, new friends, and a whole lot of sexual tension. Can Derek and Hunter finish Justin’s road trip without ripping each other’s heads—or clothes—off?

A Dream Road Trip with From the Ashes Author C.M. Valencourt

While writing my novel From the Ashes, I thought a lot about road trips. In the book, the characters go on a road trip around the Midwestern United States to scatter their friend Justin’s ashes.

I chose the Midwest for the road trip’s setting because I’m from Michigan, and have visited all of the sites that the characters go to. I also wanted the trip to be exciting, but still something that was in reach for a bunch of college seniors from Ohio.

But today, I’m designing my dream road trip. And I’ll let you know how Hunter and Derek, the protagonists of From the Ashes, would react to each place as well.

I’m not really the gambling type, so in the past, I assumed I wouldn’t ever make it out to Vegas. But then I heard about Lady Gaga’s residency, and I knew I had to try to make it out before she leaves. I saw Lady Gaga on tour right after the “Born This Way” single dropped, and I’ve been wanting to see her again ever since. I would see both her piano show and her pop hits show while I was there, since they’d both be such different experiences.

The second most important thing for me to do would be to visit Zak Bagans’s Haunted Museum. I love paranormal stuff, and have been an avid watcher of Ghost Adventures for years, so this is a must-see. I’ve never actually had any sort of experience with a ghost despite believing in them, so I would love to maybe have some sort of spooky experience while I was there.

Hunter and Derek: I think Hunter would get excited about gambling at the casinos, but Derek would have to be super firm and set a budget for him so he didn’t go too crazy and blow all their savings. They’d both also want to see Lady Gaga perform, because Hunter was into her back in middle school when she was at her peak, and Derek just started letting himself be into stuff that’s stereotypically “gay.” They wouldn’t get married at a wedding chapel in Vegas, but they’d joke about it.

One of my favorite things to do when I visit new places is to find smaller, less well-known places to go and things to see. Los Angeles wouldn’t be like that. I would be a pretty typical tourist while I was in LA.

I would want to go to Santa Monica Pier and ride the ferris wheel. I would check out the Walk of Fame (and seriously consider defacing Trump’s star). I would go hiking in the hills around the Hollywood sign.

I would also definitely want to see a drag show in West Hollywood. I love drag, but it’s not exactly the easiest thing to see in Michigan unless you’re watching Drag Race. I think it’d be great to get a taste of LA’s queer culture this way.

Hunter and Derek: To avoid spoilers, I can’t go too much into what Hunter and Derek would do in LA. You’ll have to wait until the epilogue of From the Ashes to find out. 😉

I’ve always looked to San Francisco as the gay capital, and I would be so psyched to go there. I think I would spend a lot of my time just exploring the Castro District and reveling in all the gay energy. I’d want to check out restaurants and bars and even a few clubs.

I’d want to check out some of the nature in the area, and would definitely want to see the Redwood Forest. I’d check out Yosemite, too, and watch the sun set over the bridge in Golden Gate Park.

Hunter and Derek: I think these two would be just as excited about the Castro District, and would probably spend several days exploring and dancing in the clubs. Their favorite part of the vacation, though, would be making their way back to their hotel and spending time together after all that noise.

I’m a vegetarian, so going to Portland sounds like paradise. I would go on a vegan food tour of the city, and probably try so many dishes any other city was ruined for me. I’m also a cider person over beer, so I would take a cider tour of Portland at the same time.

I would want to explore the Shanghai Tunnels, partially because they seem really cool and partially in a second attempt to see a ghost. Oh, and I’d definitely hit up Voodoo Donuts at least once or twice.

Hunter and Derek: Derek would definitely want to check out Portland’s independent cinema scene, including all the arthouse theatres. Portland apparently also has an oddities museum called The Peculiarium that I think Derek would love, given his love of horror movies. And of course, Hunter would end up shoving a Voodoo donut in Derek’s face.

I’ve only been to Canada once, but it was such a great experience. Last time I went to Ontario, so I would hit up a city on the other side of the country.

One of the most exciting things I found while researching all of these places was the opportunity to go whale watching in Vancouver. This sounds amazing, and absolutely flip out if I saw a whale. I’d want to check out their Chinatown as well as the gardens they have there as well.

I’ve also never seen the Northern Lights, so if it was the right time of year, I’d love to go on a tour to try to see them. Seeing them is on my bucket list, and something I most likely wouldn’t be able to do from home.

Hunter and Derek: Hunter would spend a fair share of his time in Vancouver politically grandstanding and talking about how much better Canada is even while he was wishing there were Starbucks on every block instead of Tim Horton’s. I think they’d also check out the Northern Lights, lying on a blanket under the stars.

So that’s the end of my road trip! If you’re interested in reading more about Hunter and Derek, From the Ashes is out now! It’s an enemies to lovers romance featuring a road trip, blue hair dye, and some steamy scenes. You can buy it on Amazon or borrow it as part of Kindle Unlimited!

C.M. Valencourt is a new m/m and queer romance author. They are currently working on their first book, an ex-friends-to-lovers road trip novel featuring slam poetry, blue hair dye, and a chase scene through a theme park. They like figure skating, ghost hunting shows, and Carly Rae Jepsen. You can get updates about From the Ashes and more of their forthcoming work by following @cmvalencourt on Twitter.