Hello on this nice (sunny) Wednesday morning! (Or afternoon, evening, night depending on where you are. We’re excited to take part in the cover reveal for Avon Gale’s and Roan Parrish’s upcoming release THRALL! 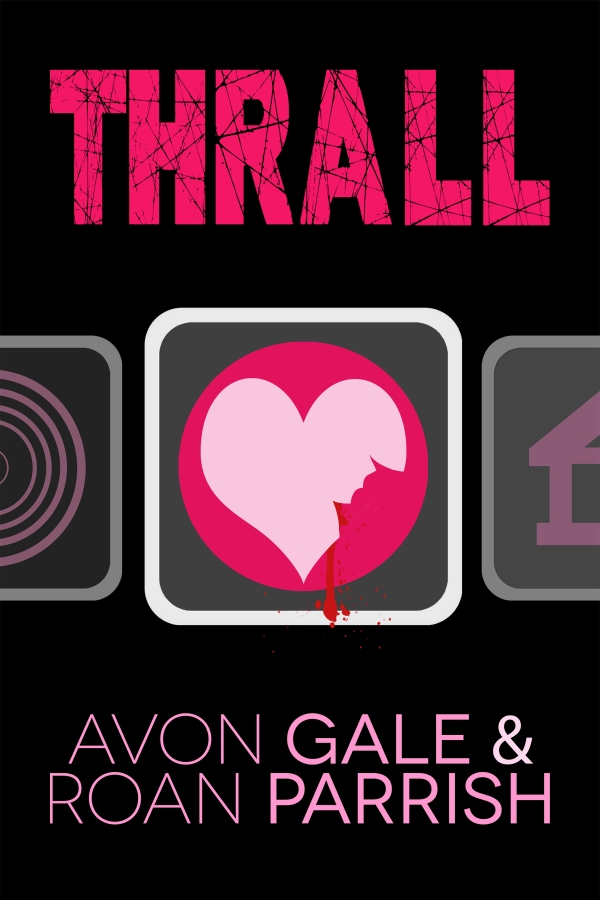 Isn’t it just awesome? We love it!

When their investigation crosses the path of a possible serial killer, the line between fantasy and reality begins to blur. And as they race against the app’s countdown clock, so does the line between friendship and love. What starts as a flirtatious rivalry between computer-savvy Arthur and techno-averse Van Helsing becomes much more, and Mina and Lucy’s relationship is tested in the fires of social media.

As they get down to the wire, the group discovers that nothing on their screens is as it seems—including their enemy.

I…no. You know you’re young enough to be one of my graduate students? Though much better dressed. But if your flirting is sincere, then I welcome it. I can’t deny that I felt something between us this morning.

I, uh, definitely felt something

Ugh, sorry, that was a terrible joke—you should be impressed, I never get this nervous. but seriously, so did I. It’s definitely sincere.

I am also nervous. I…I suppose I don’t quite know what to say next. I’ve never attempted to flirt on a—what is this, chat?

OMG, Gus. (I’m…look, that name reminds me of the musical Cats, which I loathe so can I call you Van?)

It’s kind of hot you just said you were nervous btw (and yeah, it’s chat)

I got the feeling you were calling me Professor on purpose, no? Yes, I suppose I can suffer through Van, if you must.

Yeah, because I like it. The professor thing is totally a turn-on. And I like the idea of making you like that name, Van. Just because no one else has.

Avon Gale was once the mayor on Foursquare of Jazzercise and Lollicup, which should tell you all you need to know about her as a person. She likes road trips, rock concerts, drinking Kentucky bourbon, JRPGs and yelling at hockey. She’s a displaced southerner living in a liberal midwestern college town, and she never gets tired of people and their stories — either real or the ones she makes up in her head.

Avon is represented by Courtney Miller-Callihan at Handspun Literary Agency.

Roan Parrish lives in Philadelphia, where she is gradually attempting to write love stories in every genre.

When not writing, she can usually be found cutting her friends’ hair, meandering through whatever city she’s in while listening to torch songs and melodic death metal, or cooking overly elaborate meals. She loves bonfires, winter beaches, minor chord harmonies, and self-tattooing. One time she may or may not have baked a six-layer chocolate cake and then thrown it out the window in a fit of pique.