Hello everyone!
We’re super excited to have Anna Zabo on From Top to Bottom Reviews to celebrate their new release Syncopation. This is the first book in their Twisted Wishes series. It was released today(!) and you should definitely get a copy ASAP! 😉 If you’re still undecided check out the shot excerpt below – and don’t forget to enter the giveaway for backlist titles from Anna! 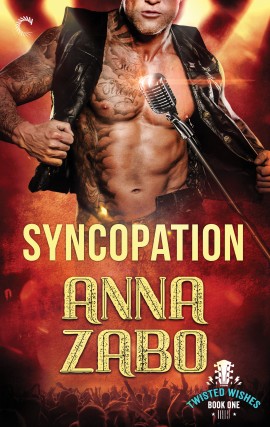 There’s no resisting the thrum of temptation in this male/male rock-star romance from genre-favorite author Anna Zabo!

Twisted Wishes front man Ray Van Zeller is in one hell of a tight spot. After a heated confrontation with his bandmate goes viral, Ray is hit with a PR nightmare the fledgling band so doesn’t need. But his problems only multiply when they snag a talented new drummer—insufferably sexy Zavier Demos, the high school crush Ray barely survived.

Zavier’s kept a casual eye on Twisted Wishes for years, and lately, he likes what he sees. What he doesn’t like is how out of control Ray seems—something Zavier’s aching to correct after their first pulse-pounding encounter. If Ray’s up for the challenge.

Despite the prospect of a glorious sexual encore, Ray is reluctant to trust Zavier with his band—or his heart. And Zavier has always had big dreams; this gig was supposed to be temporary. But touring together has opened their eyes to new passions and new possibilities, making them rethink their commitments, both to the band and to each other.

I adore rocker romances. Rockstars are kind of set apart from us mere mortals, and that can be both a blessing and a horrible curse. They’re in a cage made out of fame.

There’s all that lovely forced proximity with bandmates while on tour, which can be great if they all get along, or not so great if they don’t. Then there’s the charged air of sexual chemistry between bandmates or band and crew, especially when they know they shouldn’t get involved with each other. It’s a lovely cauldron of emotional chaos!

Plus music is just romantic by itself, especially when an author can put you right there, on stage at a concert will all the energy, vibrant sound, and pounding cheers of the crowd.

I love concerts and I love music. But if you dig under the glossy veneer a little, being in a band and on tour is hard. The music industry is brutal. There’s people trying to control your image, there’s money, there’s fans and groupies, and there are contracts that are very much like selling your soul.

You can see a lot of drama in the music industry, from bands breaking up, to members getting kicked out, to labels suing their artists and vice versa. And there are real, compelling stories of bands scraping by only to find fame, then learing that they’ve earned exactly nothing, despite platinum albums. There are also bands that are pretty much fabricated for fame, too—though those folks also work their hearts and souls out.

There’s just so much potential to take real elements of the music industry and craft romances about of overcoming odds or heartbreak and finding happiness.

I knew when I started writing Syncopation, I wanted the book to be glamorous and kinky and very sexy. Rock and Roll. But one of the things I didn’t want was the focus to be on a famous person coming out as queer, so everyone knows Ray is gay. They’re known for being an out band. It’s not an issue for the fans.

The other thing I wanted was for the band to be family for each other. Even with Zavier joining after a scandal, and even with the sexual tension and the little holder of a grudge from high school, they’re not at each other’s throats. There’s respect there. Admiration, and that quickly grows into friendship and then more as the tour has them in each other’s orbit 24/7.

But mostly, I wanted to write about someone who’d tenaciously followed his dream and worked hard against all the odds to realize it—and then be on the verge of watching everything slip through his hands.

Ray’s a talented musician, but self-made. He’s both ordinary and extraordinary. A fighter full of doubt. Throw him into the pressure-cooker of a make-or-break tour with all that passion, and he’s so close to breaking as he takes the world onto his back.

Luckily, his bandmates aren’t willing to let Ray break himself for them, especially Zavier. He knows that Ray’s strong. Viscerally believes in the music they’re playing and the energy and joy they all feel on stage. He sees how much Dom and Mish, their other bandmates, work to support Ray and the love they all have for each other.

Zavier and Ray might have their differences, but Ray’s music is real, and Zav will do what he can to help Ray make this tour a success.

Syncopation is about friendship and bonds and how love and partnerships can take all kinds of forms. That everyone can find their happy ever after.

A rocker romance was the perfect place to bring together two passionate men and let them find strength in each other while in the middle of the chaos that is a make-or-break tour.

“Who the hell is auditioning?”

Smooth voice, like those images of melted chocolate in commercials. Vaguely familiar, too. Tingles ran down both of Ray’s legs, and he rotated toward the door.

There, leaning against the frame, was Zavier Demos. Older, improbably hotter, and still as perfect as ever.

Fucker flashed a gorgeous smile. “Nice to see you, too, Ray.”

No wonder Dom hadn’t put him on the list. Ray would have crossed his name right back off due the lingering anger from high school. Zavier had been everything he’d wanted to be. Born with rock-star looks and a rock-star name, and a musical prodigy to boot. Fucking asshole had laughed all those years ago when Ray had asked him to join his first band. 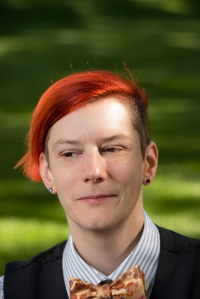