Hello everyone! We’re super excited to welcome Taylor Brooke, author of Fortitude Smashed, on From Top to Bottom Reviews today. They have brought an exclusive excerpt and awesome giveaway with them! 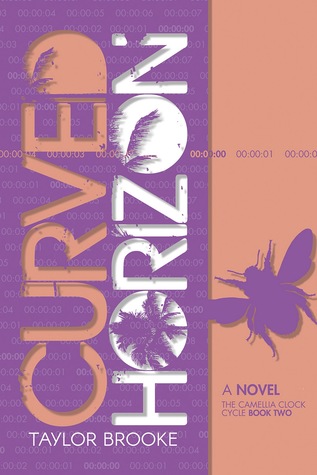 Curved Horizon picks up a few weeks after the conclusion of Fortitude Smashed with Daisy Yuen and Chelsea Cavanaugh, whose Camellia Clocks are drawing close to timing out. Navigating the ins-and-outs of love is hard enough as strangers destined to be soul mates and proves even more complicated when Daisy shares dark, ugly secrets that linger in her and Aiden’s pasts.

Meanwhile, Shannon and Aiden continue to explore their own, new relationship. Fall brings them an unforgettable one-year anniversary, but when Shannon suffers a life-threatening accident on the job, Chelsea, Daisy, and Aiden must find a way to let go of the past to make room for their future.

Dive deeper into the world of the Camellia Clock—a world of soulmates, secrets, and the healing power of love.

Also check out our character interviews with Aiden Maar and Shannon Wurther!

Chelsea poured herself a glass of red wine, the cheap kind that was on the middle shelf in the grocery store. “Cupcake,” she said, sounding out the name on the front of the bottle. She took a sip and rolled her lips together. A contented hum vibrated her throat. The wine tasted warm and sweet, notes of red velvet mingling with the standard tang of a robust cabernet, reminding her of the cake they’d eaten a few hours ago.

A knock rapped against the door of her hotel room—well, not much of a hotel room anymore—home away from home, sort of. Chelsea didn’t really know what to call it at this point. All her belongings were in this room, shy some sentimental things that were back in Georgia. The only thing she missed was going to the stables anytime she wanted, and she’d given that up in a heartbeat to come here, to the ocean right below her and Daisy down the street.

She pulled the silk tie of her white robe tight and unlocked the door. When she opened it, it wasn’t a mistaken room-service delivery or hotel staff asking if she needed more towels.

Daisy stared back at her, clutching her car keys in both hands against her chest. “I texted you to see if you were still awake. I’ve been in the parking lot.”

“Don’t you have…?” Chelsea was going to say work in the morning, but Daisy pushed inside, tossed her keys on the floor and closed the door behind her. Nimble, artist’s fingers wrapped around the stem of her wine glass, plucking it delicately from Chelsea’s grasp. “I could pour you a glass,” she murmured, trying to ignore the pull low in her belly that always seemed to twist when Daisy did certain things—certain things with her hands, how they moved, quick, precise flicks of each finger; her gaze, when it set with purpose, intent written in every blink; her mouth, when it parted as though she was waiting to be kissed or to say something important.

Daisy took a sip, reached past Chelsea to set the glass on the dresser, and grabbed the tie on Chelsea’s robe. “I didn’t come up here for wine,” she said. Her plastic black jacket was cut short, highlighting the place where her jeans met her crop top.

A fair eyebrow arched playfully. “Heaven forbid I’m polite,” Chelsea said, trying and failing to suppress a gasp when Daisy’s cold hands pushed her robe aside and landed on her ribs.

“I’d prefer it if you weren’t,” Daisy rasped. Her lips were painted sinful, dark red, and her eyes were covered in the blackest black.

Chelsea didn’t bother saying anything else. Daisy was backing her against the side of the dresser. The wine glass almost toppled over, shaken from the collision of Chelsea’s backside against a drawer. They kissed as if they’d committed murder, as if there was a body somewhere, buried with their fingerprints all over it, and they had this night—this night alone. Daisy’s palm smoothed the underside of Chelsea’s thigh, lifting her leg until it wrapped snugly around her waist. Her breath was hot in Chelsea’s mouth; her teeth were sharp when they sank into Chelsea’s lip.

Something about it—Daisy’s lipstick streaked across her face, her waist pressing into Chelsea’s hands, which were trying to undo the button on her jeans—was dreamlike and surreal.

Chelsea wanted to say this is unexpected, but saying so might change the pace. Instead, she pawed Daisy’s jacket off her shoulders until it hit the floor. “I won’t break,” Chelsea managed, because she wouldn’t, she couldn’t, and she wanted Daisy to try to break her anyway.

The hand not holding onto Chelsea’s leg snaked around her neck. Fingers threaded through her hair until she yanked, tugging Chelsea’s head back to expose her throat. “We’ll see,” Daisy said, chewing on the words before they left her mouth.

After fleshing out a multitude of fantastical creatures as a special effects makeup artist, Taylor Brooke turned her imagination back to her true love—books. When she’s not nestled in a blanket typing away on her laptop, she’s traveling, hiking or reading. She writes Queer books for teens and adults. She is the author of Fortitude Smashed (Interlude Press ’17) and is represented by Saba Sulaiman at Talcott Notch Literary Services.

Enter to win a copy of CURVED HORIZON!