Hi everyone! We’re really excited to welcome Quinn Anderson on From Top to Bottom Reviews today to celebrate the release of Cam Boy – the third book in the Murmur Inc. series. Quinn was so generous to sit down with us for a small interview, and there is an awesome giveaway at the end of the post – so don’t forget to comment to enter!

Their chemistry is undeniable, but he knows better than to mix business with pleasure.

Mike Harwood is a loud-and-proud professional adult entertainer. In the past three years, he’s starred in dozens of films, and he’s very good at what he does. But as focused as he’s been on work, he’s neglected everything else, including his love life. He’s so used to faking attraction, he can no longer tell when something real is staring him in the face.

Thanks for joining me on my book tour! I’m Quinn Anderson, author of On Solid Ground and All of the Above. I’m here to share some inside information about Cam Boy, coming out on February 12th, my 28th birthday! Stay tuned to hear about the friend who inspired this novel, fun facts, and more about the characters. Leave comments on the tour posts for a chance to win a $10 Riptide Publishing gift card!

Hi Quinn! Thanks for joining us today!

Tell us a bit about this series, but especially your newest release Cam Boy!

It’s amazing for me to look back on the Murmur Inc. series now that it’s coming to a close and think about its humble origins. I’ve told the story of how I conceived of Hotline before—I was up too late one night and saw an infomercial for a sex hotline on TV—but I never intended to turn it into a series. When I wrote Hotline, however, I couldn’t get to all the plot I’d planned for it, so I decided to write a second book. Then the same thing happened again, and a third book was born.

Cam Boy is a bit of an anomaly, in that I actually get the urge to reread it myself. I just love the characters and their growth so much, I want to watch them come together over and over again, like listening to a favorite song on repeat. Josh in particular is so much fun for me. He was such a brat in Action, the second book, that I wasn’t sure he could be a good main character, but in book 3, Cam Boy, he really comes into his own.

Hotline was your second book, how have things changed for you – has the way you write/approach a new book changed?

My approach to writing has definitely changed over the years. My first book—which was titled “In Excess” and is going to be rereleased under the title “The Academy” sometime this year—was written when I was nineteen and just a nerdy fangirl with a dream. There’s a reason why there was such a long pause between that and when I started writing seriously: I was still growing up!

Nowadays, my writing has matured into the colloquial, third-person-that-reads-like-first-person style I’ve cultivated, but as my 28th birthday approaches, I recognize that I’m going to keep changing with time. And I’m looking forward to it. I hope to look back on my books in another ten years and say the same thing: “I was still growing up when I wrote that.”

The most challenging aspect of approaching a book is recognizing that I’m God, as I like to put it. Meaning, I can write any given idea in a nearly infinite number of ways. Having all those possibilities can be daunting, but thankfully I have friends and family I can consult with when I’m not sure which way to turn.

What motivated you to use the sex industry as setting for this series? And how did you research it?

I’m a huge proponent and activist for sex worker rights. Out of my ten closest and oldest friends, eight of them are or have been sex workers at some point in their lives. Morgan (not their real name) is a college friend who paid their tuition doing cam work, and occasionally griped to me about it between classes. Betty (also not her real name) is what’s called “full-service.” Some weekends she’ll go to events with rich men who pay her $900 a night to act as their arm candy and then have sex with them back at the hotel.

Sarah is another friend of mine who’s full-service, and I was the one who took her to the hospital when her pelvis became inflamed. One of her clients had given her gonorrhea, which had gone untreated because she didn’t have health insurance. I was also who she called in tears when a client raped her. She couldn’t go to the police, because they would just arrest her and then do nothing to find her rapist. When I talk about that, people legitimately ask me if a sex worker can be raped.

Obviously, this is very dark, and the Murmur Inc. series is in the romantic-comedy genre. I didn’t write this series so I could preach to people about my views on sex work, but I did write it in the hopes of humanizing sex workers and introducing a new point of view while also (hopefully) entertaining. In the series, sex work is a job like any other, with pros and cons and sundry, sometimes mundane inconveniences.

I actually did less research than you might think. I asked my sex worker friends about their real experiences, and I myself worked as a phone sex operator for two weeks while writing Hotline. I wanted the books to be as authentic as possible, so going directly to the source seemed like the best approach.

What do you find the hardest part about writing?

Naming what’s difficult about writing for me is tricky, because most of the time, I think writing is the easy part. It’s usually things that are writing-adjacent that are difficult. For example, not comparing myself to other authors, and not internalizing criticism. Someone who didn’t enjoy one of my books probably doesn’t hate me as a person, but my brain sure loves to convince me that they do.

In terms of actually putting words on paper, I’d say it’s most difficult to find new ways of saying the same things. Most of my books are contemporary/new adult, and there are only so many ways to describe mundane actions, like driving a car from point A to point B. Sometimes I feel like I’m saying the same things over and over again, and I have to remind myself that in certain instances, that’s okay.

Everyone who’s checked Riptide’s website knows you’ve been busy, can you maybe tell us a bit about your current writing project?

If you’d interviewed me a couple of weeks ago, my “current project” would have been a totally different book from the one I’m working on right now, ha ha. I have definitely been busy. I can’t seem to write fast enough to keep up with all my ideas, and I hope that never stops.

My current project is a step in a different direction from my usual work. I’ve been told I tend to pull punches, and it’s true: my books are often light and low-angst. I don’t like to make my characters suffer. That’s not going to change too dramatically, but the book I’m writing right now deals with some pretty heavy subject matter. It’s still a comedy, as all my books will forever be, but I can promise there will be no shortage of emotion in this one.

And last question (or rather request): tell us about authors or books you’ve read and loved lately?

Outside of LGBTQ+ fiction, my favorite author is Gail Carson Levine, who wrote Ella Enchanted. It was the first book that captured my imagination as a child, and you can see her influence in my writing if you tilt your head and squint. Equally wonderful are authors Libba Bray, Tamora Pierce, and Marie Lu.

The first m/m book I read was Frat Boy and Toppy, which also led me to Riptide Publishing. I adore Anne Tenino and have read pretty much everything she’s written. Also, many people don’t know this, but Eli Easton and I go way back. We used to write fan fic for the Sherlock fandom years ago, and I volunteered to beta one of her fics so I could read the chapters early. She’s absolutely an all-time fav. The last LGBTQ+ book I read and really loved was Wet Heat by R.D. Hero. 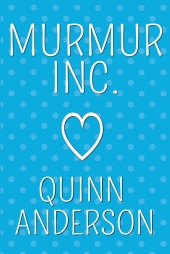 There’s no shortage of talent wandering Murmur Inc’s halls, and oddly enough, no shortage of romance simmering behind the scenes. Murmur Inc. takes mixing business with pleasure to new levels. Want an inside look at the personal lives of Murmur Inc’s hottest stars? No subscription necessary.

Quinn Anderson is an alumna of the University of Dublin in Ireland and has a master’s degree in psychology. She wrote her dissertation on sexuality in popular literature and continues to explore evolving themes in erotica in her professional life.

A nerd extraordinaire, she was raised on an unhealthy diet of video games, anime, pop culture, and comics from infancy. Her girlfriend swears her sense of humor is just one big Joss Whedon reference. She stays true to her nerd roots in writing and in life, and frequently draws inspiration from her many fandoms, which include Yuri on Ice, Harry Potter, Star Wars, Buffy, and more. Growing up, while most of her friends were fighting evil by moonlight, Anderson was kamehameha-ing her way through all the shounen anime she could get her hands on. You will often find her interacting with fellow fans online and offline via conventions and Tumblr, and she is happy to talk about anything from nerd life to writing tips. She has attended conventions on three separate continents and now considers herself a career geek. She advises anyone who attends pop culture events in the UK to watch out for Weeping Angels, as they are everywhere. If you’re at an event, and you see a 6’2” redhead wandering around with a vague look on her face, that’s probably her.

Her favorite authors include J.K. Rowling, Gail Carson Levine, Libba Bray, and Tamora Pierce. When she’s not writing, she enjoys traveling, cooking, spending too much time on the internet, playing fetch with her cat, screwing the rules, watching Markiplier play games she’s too scared to play herself, and catching ’em all.

To celebrate the release of Cam Boy, one lucky winner will receive a $10 Riptide credit! Leave a comment with your contact info to enter the contest. Entries close at midnight, Eastern time, on February 17, 2017. Contest is NOT restricted to U.S. entries. Thanks for following the tour, and don’t forget to leave your contact info!