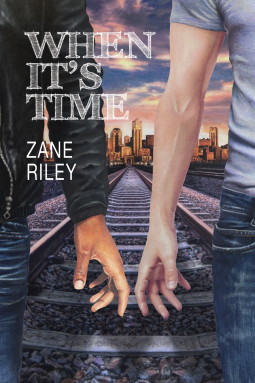 In the New Adult series that began with Go Your Own Way, Will Osbourne and Lennox McAvoy must now face the challenges of a long distance relationship that will determine their future. Despite the fulfillment of his childhood dream, Will is suffocating in too-loud, too-dirty, too-busy New York City. Lennox, who has always relied on Will for guidance, is thriving in Boston without him. As Lennox embraces his promising new life and rediscovers old family, Will searches for a future of his own that won’t tear them apart.

When It’s Time is a lovely closing chapter to a series that has been a favorite since the first book in the series (Go Your Own Way) was published in 2015.  These are all sexy, raw and sweet books that chronicle Will and Lennox’s love story, as well as their own individual coming of age moments.

It’s no secret that I have a thing for redeeming characters; Lennox has long been my yardstick for success in turning a character around the way that Riley has done. As such, Lennox is special to me, and getting to watch him grow up and grow into a fulfilling and happy life was nothing short of joyful.

This is not to say that When It’s Time isn’t without the signature grit and rawness present throughout the series. Riley never shies away from the toughest parts of being in love, with the negotiations that have to take place, particularly between two very strong-willed, stubborn and passionate characters. Will and Lennox’s dynamic is at times difficult to read because it is so real, because Riley commits to depicting a relationship that at times is imperfect and difficult. It’s not only so true to these characters, but so necessary to this story. Lennox and Will couldn’t be any other way with each other — it’s who they are and that passion is what gets them through, what ultimately always holds them together.

As a reader who loves these characters so much, the beginning of this book was painful because, watching Will’s dream of going to school in New York fall apart is heartbreaking. I’ve come to love Will in these last three years; we’ve known from the start that Will dreamed of leaving his town behind and going to New York since he was young.

It was a lovely and poignant thing, to immerse myself in Will’s struggles while watching Lennox finally, finally really blossom.  With everything Lennox has been through — the loss of his parents, his grandfather abandoning him, what happened to him when he was in juvie — all of that has been so present in everything Lennox has done throughout the first two books. This book was his moment to shine, to have a place where he could let himself succeed, and trust that he can have something he loves, and to make music, the thing that kept him going for years, into something sustaining.

Lennox’s struggle as he begins to process the trauma he went through while in juvenile prison was unexpected for me but I’m very glad it was done. I identified with this so much: in my life, it is only when I’ve reached a safe place that trauma begins to demand attention, when our bodies and minds start to catch up to what has happened. Lennox refers to his time in juvie so often in this series, referring to what happened in flip, cruel, sarcastic ways. I appreciated that Riley didn’t shy away from this story, and that we finally see Lennox to face the things he’s been hiding from.

This couple struggles, and as a reader it was hard but ultimately rewarding to see them go through something so challenging and still come back together. I loved that even when they weren’t speaking, neither of them was willing to say they’d broken up. I don’t know why, but I felt like that was such an expression of love and trust: waiting it out, being unwilling to give up on each other, even when nothing in their lives felt certain.

Riley does a great job tying together threads that have been present in each book. Will and his step mother, Karen, finally have that real conversation about where they are in their relationship and why. This was something I’ve really wanted all along, and it answers and works with the ways relationships, even loving and strong ones, can be so complicated. Lennox’s family story was just the icing on the most delicious cake. Even when Lennox was at his most unlikeable in the first book, I so wanted him to have a family other than Will’s, to have people in his life to love him just for being him, for existing. Finding his mother’s side of the family and the joy they took in Lennox and his sister Lucy was absolutely beautiful.

The ending of this book was so bittersweet, Will is on the cusp of a new beginning, of redirecting his dreams and restarting his life after dropping out of college. As a reader so invested in their story, I can’t help but wish for more. But that’s the gift of Riley’s work with these books: we come to know and love Lennox and Will so much we wish we could be with them through every step and bump and triumph in their lives. Ultimately, the knowledge through experiencing these books is this: these two know how to fight for each other, they’ve learned how to fight for themselves. They have family and friends and dreams to pursue. That is a lovely, satisfying ending.

Trigger Warning: in this book Lennox begins to process sexual assault. It’s never on page, and it’s been referred to in the two previous books, but it does have its own, central story line here.

Zane Riley is a transgender writer who wrote his first work of fan fiction in the fourth grade. He is a recent transplant to Vancouver, Washington where he spends his time watching long distance baseball games, hiking, and exploring the musical depths of the internet. His first novel, Go Your Own Way, was published by Interlude Press in 2015.