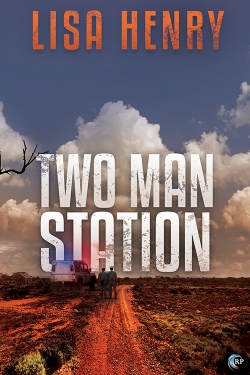 Gio Valeri is a big city police officer who’s been transferred to the small outback town of Richmond with his professional reputation in tatters. His transfer is a punishment, and Gio just wants to keep his head down and survive the next two years. No more mistakes. No more complications.

Jason Quinn, officer in charge of Richmond Station, is a single dad struggling with balancing the demands of shift work with the challenges of raising his son. The last thing he needs is a new senior constable with a history of destroying other people’s careers. But like it or not, Jason has to work with Gio.

In a remote two man station hours away from the next town, Gio and Jason have to learn to trust and rely on each another. Close quarters and a growing attraction mean that the lines between professional and personal are blurring. And even in Richmond, being a copper can be dangerous enough without risking their hearts as well.

This book easily captivated me and transported me into the harsh countryside that is the australian outback. Life really has a different pace there than living in a city considering that they only have two police officers. It also differs on how things are handled and I loved that we got to see both Jason’s and Gio’s point of view on this. When Gio first arrives he has to get to used to the way things are done in the outback. Working in such a small station means that you’re “on the job” basically 24/7 the whole year around and the people you’re there to protect and keep in line are also your neighbours. It’s impossible to just go home and forget about the job because something could happen anytime that needs both officers to handle it.
I found that Two Man Station perfectly captured the small-town atmosphere where everyone knows everyone, and you also know everything about people’s private life.

When Gio first arrives in Richmond, him and Jason don’t really trust each other. Gio still struggles a lot with what happened at the Coast and is wary to open up to Jason. He just wants to keep his head down and pass the two years of his banishment without incidents. He doesn’t see himself staying more than the two years he’s supposed to. He tries to keep his distance from Jason.
Unbeknownst to Gio, Jason does know what happened in Brisbane – at least he knows the official version. Which makes him wary of Gio, but he’s stuck there with him for the time being.

Two Man Station is a slow-unfolding story, though it works really well with the characters and the setting. Despite having both Gio’s and Jason’s point of view it takes a bit until the reader finds out why Gio left the Gold Coast and why he’s still being harassed by his former co-workers. Also the tension between both builds up slowly. There is no overt flirting and the attraction isn’t instant either. The whole relationship mostly begins as a friends with benefits kind of arrangement where both guys get off regularly, but there are no plans for commitment or anything alike. If you are looking for a super romantic story, this will not be for you. For me it was the perfect read at the time though.

I was equally sucked in by the need to find out what had happened to Gio at the Coast and also how it would all play out now that he was in Richmond — not just the harassment by his former co-workers (though that too!) — but also how Gio would adapt to life in such a rural environment.

Henry doesn’t gloss over how hard and isolated the life in the outback can be. We see this throughout the book when Jason struggles to find someone to care for Taylor when he’s working. It’s also apparent when something happens how vast the outback is — I’ve read a couple of books set in the outback and it still always blows my mind when you think of how big it is. How you have the bare necessities there, but if something major happens, help is not only a 10 minute drive away.

Henry also doesn’t gloss over how hard it is to deal with, and to heal from emotional and physical abuse. That it doesn’t happen on page did not make it easier. It’s still so raw and painful for Gio. I liked the way the author handled this part — it wasn’t dramatic but handled carefully and with respect — and it fit the overall tone of the story quite well.

On a lighter note: Taylor, Jason’s son, was an absolute sweetheart and I really loved to see the relationship between him and Jason. Taylor is a quirky ten-year old kid and he constantly brought a smile to my face. Be it when he secretly tries to feed the stray cat — though Jason knows what he’s doing the whole time — or when he finds out about the relationship between Gio and Jason. That kid is seriously adorable and definitely has the heart on the right place.

The story ends with a few questions still unanswered and I’d say it’s a definite happy for now, but there are no plans really for the future — something that I would have loved to have. At the same time I liked that the way the story ends leaves so much room for  the possibility of a sequel.

– Please be aware that there is a shooting on page, mention of past domestic and emotional abuse as well as explicit violence. –

Lisa likes to tell stories, mostly with hot guys and happily ever afters.

Lisa lives in tropical North Queensland, Australia. She doesn’t know why, because she hates the heat, but she suspects she’s too lazy to move. She spends half her time slaving away as a government minion, and the other half plotting her escape.

She attended university at sixteen, not because she was a child prodigy or anything, but because of a mix-up between international school systems early in life. She studied History and English, neither of them very thoroughly.

She shares her house with too many cats, a green tree frog that swims in the toilet, and as many possums as can break in every night. This is not how she imagined life as a grown-up.