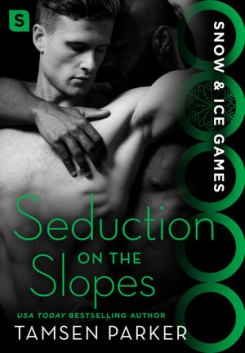 Miles Palmer has dominated the downhill slalom in every Snow and Ice Games he’s competed in. Double gold, double gold, double gold, and he’s confident he can round out his career and his trophy case with two more medals in his last appearance at the games. The only thing that could stop him? Crash Delaney.

Crash is a young upstart who came out of nowhere and shocked the downhill world with his swagger and untraditional style. As a kid, Crash didn’t have the resources to learn how to race properly, but he begged, borrowed, and stole equipment, and went to any competition he could thumb a ride to. Now the only thing between him and his dreams coming true is his childhood hero, the man whose posters have graced his walls since before he’d ridden in his first chairlift.

Miles and Crash are technically teammates, but you wouldn’t know it from the way they fight. The veteran and the nobody have both got big things riding on this race, and neither can afford any distractions. Especially not each other.

What a fun story! This is only the second book I’ve read by this author. (I read the first book in this series Love On the Tracks right before reading Seduction on the Slopes.) Though I definitely plan to check out more by the author.

The perfect way to describe this book is cute, delightful and sadly waaay to short. I did not want it to end. Miles and Crash are awesome together even though the two of them couldn’t be any more different if they tried. Crash is a contradiction in itself. He’s combative and seems to be unable to follow even the simplest rules. He’s snarky and knows how to best push everyone’s buttons, but he can also be charming as hell. Crash had to fend for himself from a young age on, so he is rather independent.
What he wants most during the SIG is to avoid anything to do with the press if possible. Crash has anxiety and just thinking of doing an interview sends him running to the bathroom.

Miles is the polar opposite of that. He’s charming and as a veteran at the Snow and Ice Games knows what to do to get the best coverage. Other than Crash’s family, Miles has really supportive parents who are interested in his career and accompany their son to his sporting events.

Miles is not happy when he’s tasked with keeping Crash in line and making sure that he is on time and present at each interview or doesn’t cause trouble otherwise. Which — knowing a bit about each of them — does seem like a mess waiting to happen. Somehow though the two — after Crash publicly throws up right before an interview — find a way to navigate Crash’s anxiety. This is to say that Seduction on the Slopes has the possibly cutest but also kinda weirdest way to start a friends with benefits arrangement that I’ve ever read. I have also never read so many euphemisms for throwing up as I did in this story.

The tension on and off the slopes between both was delicious and I really loved how Parker took the stereotypes of an out gay man who is dark-skinned and turned them upside down. Sports romances are very white and a lot of times the POC MC is the one who isn’t in a great situation financially. This doesn’t happen here. On the contrary it’s Crash who isn’t in a financially stable position.

What I really loved about this story was how delightful, fluffy and light it was. Crash and Miles both charmed me — though Crash can also be really annoying when he wants to be! But despite being opposites in pretty much every way they just worked together. I loved how each of them learned something from the other one. And I thought Parker did a great job at giving both a believable happy end.