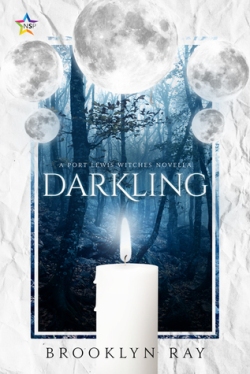 Port Lewis, a coastal town perched on the Washington cliffs, is surrounded by dense woods, and is home to quaint coffee shops, a movie theater, a few bars, two churches, the local college, and witches, of course.

Ryder is a witch with two secrets—one about his blood and the other about his heart. Keeping the secrets hasn’t been a problem, until a tarot reading with his best friend, Liam Montgomery, who happens to be one of his secrets, starts a chain of events that can’t be undone.

Dark magic runs through Ryder’s veins. The cards have prophesized a magical catastrophe that could shake the foundation of Ryder’s life, and a vicious partnership with the one person he doesn’t want to risk.

Magic and secrets both come at a cost, and Ryder must figure out what he’s willing to pay to become who he truly is.

*A copy of this was provided by the author

Darkling hooked me from the first page on and I probably would have read it in one sitting if me being sick and then family things hadn’t gotten in the way of it.

Ryder is half fire witch, half necromancer but none of his friends know. He has kept that part of himself hidden his whole life and now that he’s getting older his necromancer side is getting stronger and yearning to become a full necromancer. It’s harder and harder for him to hide his powers. The problem is that no one really likes necromancers and he doesn’t want to lose his friends – which he thinks will happen when they find out about his powers. Add to that, he is hopelessly in love with his best friend Liam – who doesn’t know about it – and you have the perfect recipe for possible chaos.

Watching Ryder and Liam navigate their feelings for each other and the early days of a relationship was so cute and adorable. It legit had me swooning because it was just so beautiful. At the same time these two also know how to burn up the sheets… or rather the hood of a car. The sex scenes are explicit but also have a tenderness to them that was unexpected but also so right for these two.
I loved how Ray included Ryder’s identity so casually, without making a big deal out of it. His trans identity and coming out to Liam was not the focus of the story. It was on page and he worried about it, but the focus of Darkling was on Ryder, of…well, being a Darkling: a fledgling necromancer who hasn’t gone through the ceremony yet to become a full necromancer.

Brooklyn Ray is definitely an author to watch out for. They easily built a world that – despite the short length of the story – is rich and doesn’t feel incomplete or only half done. Yet I know that what we saw was only a small fragment and there is still so much left to explore. Throughout the story I was mesmerised and fascinated how complex each character is. Ryder is still young and has lots to learn, especially in regards to his necromancy.

I find stories with or about necromancers really fascinating and wish there were more of them in the romance genre. I know death isn’t romantic but if vampires and other creatures can get a happy end I’m sure necromancers can too. Prior to Darkling I hadn’t read a story where the necromancer isn’t even a full necromancer yet but still coming into his powers and I really enjoyed Ray’s take on this. (Please be aware of the content warnings though!)

Ray created a world full of magic you just want to dive into, with characters that make you feel like you’ve met them and an amazing storyline of discovering and accepting yourself. The result is truly spellbinding. Highly recommended and I can’t wait for the sequel. In the mean time I’ll reread this a couple of times. 😉

Brooklyn Ray is a tea connoisseur and an occult junkie. She writes queer speculative fiction layered with magic, rituals and found families.