Hello everyone! We’re super excited to welcome Anna Zabo, author of Outside the Lines, on From Top to Bottom Reviews! With them are Lydia, Ian and Simon (who so kindly sat down for a little interview with us). We hope you enjoy!

At the bottom of the post you’ll find a giveaway! 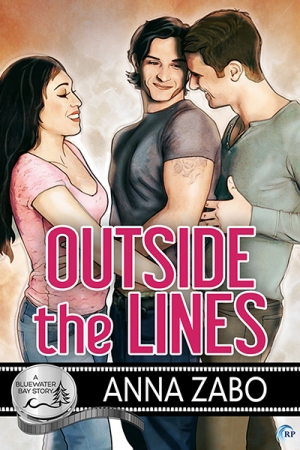 Miniature artist Ian Meyers has one week to rebuild his damaged set. Needing help, he goes to End o’ Earth, the local comic and gaming shop. Owner Simon Derry pushes all of Ian’s buttons, and he also has steady hands and the skills Ian needs.

Ian’s all in, and it’s fantastic working with Simon to piece together his set and then take each other apart at night. His friendship with Lydia grows too. The only problem is, the more time he spends with Simon, the more he wants everything Simon already has with Lydia: A house. A cat. A commitment. So Ian runs, and shatters the trust he has with them both—right when they need him the most. Piecing their relationships back together might prove harder than a smashed set. 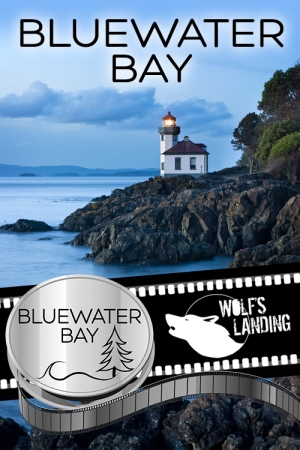 Welcome to Bluewater Bay! This quiet little logging town on Washington state’s Olympic Peninsula has been stagnating for decades, on the verge of ghost town status. Until a television crew moves in to film Wolf’s Landing, a soon-to-be cult hit based on the wildly successful shifter novels penned by local author Hunter Easton.

Wolf’s Landing’s success spawns everything from merchandise to movie talks, and Bluewater Bay explodes into a mecca for fans and tourists alike. The locals still aren’t quite sure what to make of all this—the town is rejuvenated, but at what cost? And the Hollywood-based production crew is out of their element in this small, mossy seaside locale. Needless to say, sparks fly.

Check it out at Riptide Publishing!

We’re not exaggerating when we say we totally swooned at some of their answers. Others had us laughing out loud. 🙂

Let’s start this easy, shall we? What is something about your partners that they don’t realize about themselves?

[Ian ponders for a little bit]: Lydia makes the best damn eggs I’ve ever eaten. Like, doesn’t matter how they’re done, they’re always perfect and I have no idea how she does it, ‘cause mine come out like crap.

Simon hums when he’s happy and it’s like an aphrodisiac.

[Lydia nods]: Yeah. He’s adorable and you just want to jump his bones when he’d like that.

[Simon’s a little red in the cheeks] Uh. I’m not going to complain.

[He coughs] Well, I’ve known Lydia forever, and I tend to blurt out what’s in my head, so I’m pretty sure anything I’ve realized, she knows. Like, I realized early on that she organizes things by color. So all the stuff on the bathroom counter is in a rainbow. More things should be rainbows..

Ian… well, he smiles every time he sees Lydia. I don’t know if he realizes… I kinda want to bottle that.

[Ian ducks his head, but is smiling]

Lydia: He smiles like that when he sees you too. He’s like a bottle of sunshine sometimes.

As for Simon, [she eyes him] Someday, he’s gonna realize he’s actually funny, talented, and clever.

This is the first poly relationship for Ian, but not for you, Lydia and Simon. Tell us a bit about how you learned to navigate this new relationship.

Wow. Um. Some of it came kinda naturally? At least once I got my head out of my ass.

[They all chuckle, and Lydia pats his arm.]

I think it really helped that Simon and Lydia had been in a serious relationship before, so I wasn’t worried about them, you know? Like, if things didn’t work out, they’d be fine and I knew that going in. But at the same time, I guess I didn’t want to be just Simon’s boyfriend, who happens to live with them. I wanted all three of us to actually be a family, so that’s… It requires me and Lydia being a family, too. So, like I guess we kinda started off friends and built from them between us. And all of us, too.

But there’s me and Simon and me and Lydia and then the three of us.

That probably makes no sense. [He laughs] It’s emotions and commitment and talking and listening. Which is sort of like any committed relationship.

Tying in to the last question, did you experience bigotry because of your relationship? How would you handle that? Do you plan to come out in your town?

Ian: I think a lot of people don’t quite get it? But people have been surprisingly…okay with the whole thing?

Lydia: I pretty much blew our cover when I chewed Ian out at Stomping Grounds, so we didn’t so much come out as just stopped trying to hide.

Simon: Which I’m all for. There’s been a couple people who’ve given me the side-eye here or there, but Ian’s right. For the most part, it’s been a non-issue.

Lydia: I think it helps that the Wolf’s Landing folks took us under their wing.

Ian: You mean, you wowed them with your talent and they snatched you up before anyone else could, and they put up with Simon and me as a result.

Lydia: They were putting up with you long before us, sweetheart.

What do you love most about being in a relationship with more than one person?

Lydia: Division of labor. [They all laugh.] Yeah, that’s flippant. But Ian actually empties the dishwasher, unlike some people… [Simon looks up at the ceiling] But more seriously, I love having multiple points of views on things. Simon and Ian don’t see things the same way, so there’s this—[she kind of make a ball in the air with her hands]—whole picture thing I get when I need to talk something through.

Ian: I guess for me, it’s kinda the same? Except I just love having someone to talk to about everything. If I’m boring Simon, usually Lydia’s interested. And if I’m boring Lydia, Simon wants to know more. But yeah, like Lydia said—perspective. And like, when one of us is mad or upset, someone can be the comforter and the other person can figure out how to fix it. We all get a chance to be what the other needs. It’s not always perfect, ‘cause yeah, we can gang up, but we don’t usually.

Lydia: And when we do, there’s often a good reason.

Simon: What they said, basically. But also, the sex is phenomenal.

[Lydia shoves him and Ian blushes.]

[Simon laughs] Look, someone had to say it!

What would be the perfect date for you guys?

Ian: If it’s all of us, just curling up on the couch to watch a movie, which isn’t terribly exciting. But it’s something we love doing.

Lydia: I think the best date I had with Ian was when we drove out to Port Angeles and Sequim and spent the day shopping in every arts and crafts store we could find. Then we had dinner in this little roadside place and no one knew what to make of us because we were laughing too much and ended up feeding each other pie.

Simon: My best date with Ian was when we went hiking.

[Ian gets a cocky little smile.] You’re not going to go into why?

Simon: Let’s just say that the outdoors is invigorating and leave it at that.

Lydia: I’m sure there was rope involved.

Ian: There was a lot of rope involved.

Simon: With Lydia, every year on our anniversary, we go out to a fancy-ass dinner. All dressed up like a million bucks. Started out as a way to dream about our future.

Lydia: When we were rich and famous, or at least could afford forty dollar bottles of wine.

Simon: Well, we can do that now… I guess now it’s about celebrating what we have. ‘Cause when I stop and think about it, I think my heart’s gonna explode.

[They both look at Ian.]

Let’s talk fun things, if you could go anywhere, where do you want to go on vacation? And what souvenir would you bring back?

Simon: Uh wow. This is dumb, but I want to go to Antarctica. Do they let you bring stuff back? I mean… Photos. I’d bring back a lot of photos.

Lydia: I want to go to the Hobbit set in New Zealand. I’d bring back everything I could stuff in my suitcase.

Ian: I think I like Lydia’s vacation better than Simon’s! I’ll go with her. Especially if I can bring back Billy Boyd…

Lydia: I think he’s in Scotland and I don’t think he’ll fit in your luggage.

And lastly we have a couple of quick questions:

Who has the biggest sweet tooth?

Ian: Probably me. I’m the one who brings home cookies and chocolate and ice cream.

Who is the biggest baby when they’re sick?

Who steals the blanket in the night?

Simon and Ian answer this one at the same time: Lydia.

Lydia: I get cold, okay?

They all laugh, and Simon and Ian point at Lydia.

Who is the grumpiest without coffee/before their first coffee in the morning?

Ian: We should just start a line of credit at Stomping Grounds, honestly. Have them bill us each month.

And that’s all. Thanks to Anna (and the gang) for this; we hope you enjoyed it as much as we did!

To celebrate the release of Outside the Lines, one lucky winner will receive a $25 Riptide credit! Leave a comment with your contact info to enter the contest. Entries close at midnight, Eastern time, on December 23, 2017. Contest is NOT restricted to U.S. entries. Thanks for following the tour, and don’t forget to leave your contact info!