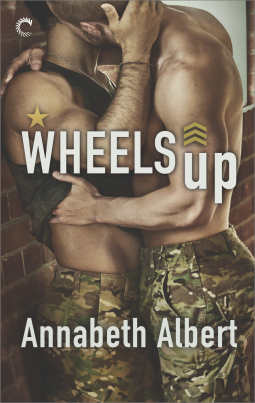 Their love is forbidden, but their hearts aren’t listening to rules and regulations.

Lieutenant Dustin Strauss is a reformed man. No longer a twentysomething hell-raiser, he’s his SEAL team’s new XO-and a man with a secret. Or seven. He’s kept his bisexual identity under wraps for years, along with his kinky side and a fondness for the military-themed semianonymous hookup website Joe4Joe. His latest chat buddy is more than a sexy online distraction-they’re taking their very not-safe-for-work relationship into real time.

Petty Officer Wes Lowe has a smart mouth, a take-charge attitude and an uncanny ability for making things go boom. The life of an enlisted man isn’t always enough to satisfy him, but one wild, no-questions-asked weekend with his online love comes close. When a transfer order comes in, Wes feels ready and centered. He’ll make a good impression on his new SEAL team and keep his growing feelings for Dustin on the down low.

But as they log more time online and some very real emotions surface, Dustin and Wes struggle to pretend they’re just a harmless fling. And when his commander introduces Dustin to his team’s newest member, they’re in for the shock of a lifetime…and a crushing disappointment: their difference in ranks means even a friendship without sexual contact could end their navy careers for good.

With their hearts on the line, Dustin and Wes may not survive their next mission, let alone find a way toward a future together.

I’ve enjoyed Albert’s Out of Uniform series quite a lot. I’d definitely recommend the whole series, including Wheels Up. I will be honest and say, however, that this is my least favorite of the series.

I mentioned in my review of  On Point that there was something — a spark maybe — that was missing between the main characters, and that spark was really felt during the sex scenes. While I don’t feel the same with this book — the sex was very sexy — there was still some kind of disconnect happening in this book.

This book has so many elements that would normally have made it a yes please right now: super hot sex with a dash of kink, complex characters, online relationship turned real life hookup, etc. And while Albert hit good notes with some of this, there were things that just didn’t work for me.

So much of this book focused on a back and forth “we shouldn’t do this” but oops “we did it” which became tedious after a while. I appreciated that it had to exist because of fraternization rules — as in, these characters had to navigate wanting and falling for each other when they weren’t allowed to. But the part where they kept *saying* they couldn’t do it and then doing it lost so much tension when it was a rinse and repeat kind of thing.

Additionally, the wheels up aspect — the characters being called into action and how that action played out, was a little disappointing. I expected these sections to a) be a bigger part of the story and b) create drama and tension. But they felt rushed and unnecessary for achieving what the author was trying to achieve.

I did enjoy the characters — particularly Wes. He captured my attention, I loved his devotion to his family, and his commanding/toppy presence. However, considering how we meet Dustin in the previous books, the story about him being bi is so rushed — as readers we are just plopped into that story when there wasn’t really indication in the previous ones (other than that his inclusion as a side character in an ongoing series signaled we were going to get his story).

This all sounds rather negative: however, if you are looking for a very sexy, met online and have tension and drama kind of book, I recommend it. This is a good book to escape the world for a moment with. It just didn’t hit the notes I was hoping it would, particularly within this series.