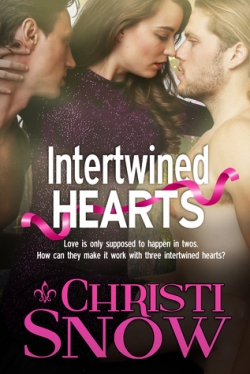 Three people who’ve given up on love…

Hudson:
After a brutal, late-night attack in his restaurant left Chef Hudson Richmond too traumatized to even enter his restaurant again, he escaped to Snowcroft. Now he’s trying to find a new normal when the reality of his world is a man’s touch makes him sick and his dream has become his nightmare.

Leigh:
Leigh Vaughn lives in a man’s world running Vaughn Construction with her brother, Jamie. She’s tried to be feminine and failed over and over again. Growing up with only her brother, father, and construction crews to guide her, Leigh has no idea what a feminine wile is, much less how to deploy them. But when Jamie and Trevor begin to research finding a surrogate to carry their baby, she knows this is something she can do. Hell, it’s not like those parts are getting used for anything else.

David:
When this small town came looking for a new police chief, David Warner jumped at the chance. After a traumatic betrayal by his partner on the police force, he’s burnt out and jaded. And his love life has been even more depressing than his work life. He’s made one true connection in the last five years, but she disappeared without a trace the next morning.

Three people who have given up on love, may just find a new beginning where they least expect it…in Snowcroft. But love is only supposed to happen in twos. How can they make it work with three intertwined hearts?

When I saw this on NetGalley I didn’t hesitate for long and requested it. I love a good polyamorous story and there really are not enough of them out there. The wait until I was approved for this title felt like eternity. And once I got it I couldn’t wait to dive in.

Unfortunately my enthusiasm for it didn’t hold on for long. The story started out nice enough, even if it had an insta-love vibe that – when done well can work for me – didn’t this time. Intertwined Hearts didn’t sweep me off my feet as I had hoped. From the beginning of the book there were little things that bothered me, but I was so excited for the story that because I hoped it would get better I tried to ignore them. Things like the misogynistic comments regarding Leigh’s pregnancy by herself and others, the way the attack on Hudson felt like the typical queer-pain-porn, existing only to add a bit of drama and no depth to the story, and the way  David ignored Hudson boundaries and touched Hudson, even though Hudson did not like to be touched –  became impossible to ignore. And how hard is it to call women women and not “female”? (“He hadn’t had that kind of reaction to a female since high school”)

The more I read the less I wanted to continue. In the end I decided to not finish when it came the outright harmful handling of Hudson’s PTSD.  (I want to mention that I’ve talked to someone who has experiences with therapists, because while it felt off to me, I don’t have any personal experience and didn’t feel comfortable talking about it without asking someone who has experience). Hudson goes to see a therapist and – the first time he goes to this therapist – the therapist tells Hudson things like:

“You need to do that…sooner rather than later.”

when they talk about how Hudson can not work in a kitchen since the attack because of the trauma. This felt unusual pushy to me. Not like something a therapist would tell a patient. My friend confirmed that, while a therapist might suggest something, they won’t outright tell someone – especially someone they have never met before – that they need to do something. The therapist then goes on with:

“I can’t give this prognosis to all my patients, but you have a good sense of self. You will work through this. I promise.”

They had just met! This was their first session EVER and no professional therapist can or should ever promise a patient that they will work through something. They don’t know that and decidedly not when – I know I’m repeating myself, but it really bothers me – it is their very first session together. Perhaps it bothers me so much because the first 20% of the book featured problematic stuff but I’m seriously done with the narrative of PTSD, depression or other mental health issues being handled poorly. If the character has a PTSD I just wish authors would do the fucking work to portray it realistically – that includes how it’s being treated as well.

Call it masochism or whatever you want, but I read another 20% of this book before I decided that I really did not care about how they got their “happy ending”. One thing I didn’t want to do this year was to force myself to finish a book I wasn’t really invested in, so I had to let this go. I’m disappointed that this didn’t turn out the way I had hoped.