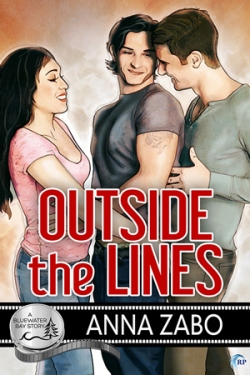 Miniature artist Ian Meyers has one week to rebuild his damaged set. Needing help, he goes to End o’ Earth, the local comic and gaming shop. Owner Simon Derry pushes all of Ian’s buttons, and he also has steady hands and the skills Ian needs.

Ian’s all in, and it’s fantastic working with Simon to piece together his set and then take each other apart at night. His friendship with Lydia grows too. The only problem is, the more time he spends with Simon, the more he wants everything Simon already has with Lydia: A house. A cat. A commitment. So Ian runs, and shatters the trust he has with them both—right when they need him the most. Piecing their relationships back together might prove harder than a smashed set.

*a copy of this was provided via Netgalley

I’m not exaggerating when I say that I have been waiting the better part of the year for this book. From when Anna Zabo teased about it on twitter when they were still writing it to having the first sneak peek on Riptide Publishing until it was *finally* on NetGalley. I didn’t even think before requesting because I wanted to read this so much. And I’m so happy that it wasn’t just as good as I had expected but so much more.

I’ve followed the Bluewater Bay series for years now and have – with few exceptions – read all the books. I loved the cameos of some of the previous characters in Outside the Lines and how easily the new characters blended in and meshed with the existing universe. Knowing that this is the second to last book in the series had a bittersweet feeling to it and it made me want to re-read some of the earlier books.

I apologize in advance for how gushy this will be but there is not a thing I didn’t like. Outside the Lines was utterly captivating and heartwarming from start to finish. I loved, loved, loved how Simon’s and Ian’s relationship progressed. These two had me literally swooning because it was so sweet and lovely. They totally charmed me and I was rooting for them from the first page on. Another thing I loved was that through it all , even when  the focus was definitely on Simon and Ian’s developing relationship, Lydia, Simon’s wife, was still part of it all. I loved the bi-rep for Simon and the different relationships portrayed in this story. There are definitely not enough poly stories out there, and I can’t think of one other that makes the difference between sexual attraction and romantic attraction clear.

Zabo perfectly captured those feelings of a new relationship, the first attraction and flirting to the “does he like me too?” phase and the fluttery feelings of a first date. How at first everything is so fresh and awesome to the little “bumps in the road” i.e. small miscommunications that occur along the way to the happy ending.

I really loved how their relationship progressed. It was just so adorable to see them fall in love and learn navigate their relationship – what works for them and what doesn’t. I loved how Lydia was always included in this. The focus is definitely more on the growing feelings and relationship between Ian and Simon, but Lydia is never just “an afterthought”. She does give the guys time together alone, but she’s never separate. On the contrary, Lydia also spends time alone with Ian so they can get to know each other and built a relationship too.

Simon is an absolute cinnamon roll and I fell for him head over heels. (I loved all the characters, but nerdy Simon just stole my heart!) It was awesome to see Lydia be part of their relationship and my (probably) favourite scene involves her setting Ian straight.
A small part kind of wished to see even more of Lydia, just because she’s so awesome. She’s such a relatable character and I really enjoyed every scene she was in, but it makes sense that the focus of the story is more on Ian and Simon, since that is the new relationship. I really wished we could get another book with the three of them a few months or years down the road. These characters have become very dear to me while reading the book and definitely will stay with me for a while.

So to summarize: Outside the Lines is a fantastic addition to the Bluewater Bay series and I really hope lots of readers will pick it up, because this one is truly awesome. Definitely recommended!

(Can I just spent a minute to gush about the cover art? I already loved the cover before I read the book. Now that I’ve read the book too, I love it even more. This cover is pretty much the book perfectly illustrated in one picture. I love that Ian is in the middle and Lydia is so clearly a part of the group. And then Simon’s contagious smile! Makes me smile every time I see it.)