Hey everyone! We’re very excited to welcome Ami on From Top to Bottom Reviews today. She kindly agreed to let us interview her, so without further ado:

Can you tell us a bit about yourself?

Well, my name is Ami. I am a woman in my late 30’s, Indonesian, Muslim, Single, and a Pisces. I consider myself an avid reader too: mostly I enjoy reading romance, urban fantasy/paranormal, and sometimes mystery/thriller.

Oh and if you have NO idea where Indonesia is, or if you only know Bali (which is actually a part of Indonesia) … here, a map for you guys 🙂 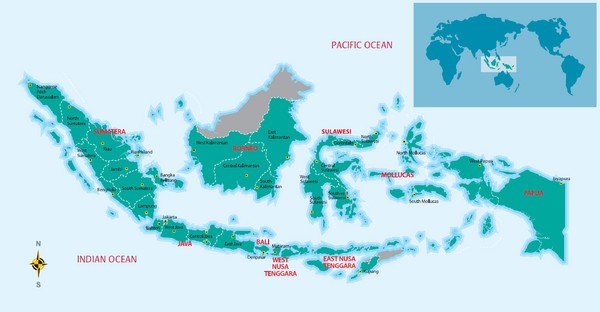 When did you first hear about asexuality?

I don’t recall the exact place / time but I’m a reader of MM romance for the past 7-8 years now. I learned from reading this genre. It introduced me to “alternative” (I’m using that term loosely) sexuality other than straight and not-straight, including asexuality.

I live in a culture where other types of sexuality is not someone can easily exposed to or introduced to from early age. At least during my childhood when Internet and/or social media is scarce. I’m sure current Indonesian millennials and generation-Z has more resources to learn about it.

How long did it take you to realise you’re asexual? How did you know?

How long? Hmmm, in a course over several months I think. I was intrigued with the definition of asexuality. I joined The Asexual Visibility and Education Network (AVEN) and browse through threads, reading other people’s posts and realized we all had similarities. It was bit difficult to grasp at first as I was trying to understand the definition of sexual attraction. I mean, I don’t experience it, right? And my culture is not exactly open to sex talk, you know? But like I said, I felt like I knew what these people were talking about, what they were experiencing. It felt like I found kindred spirits. I knew then what I was. What I am.

How important do you think asexual representation is?

Very! Asexual is probably the least represented in media; I think it’s easier for people to accept same-sex attraction rather than NOT having sexual attraction at all. It just doesn’t compute in the head of allosexual people. So I believe representation is important, to give aces voices.

Okay, I’m going to focus on books, all right? I’m not going to talk about TV or movies, or other media.

I think one of the most common misconceptions that I know – or at least read – is that ace characters simply mean they don’t/avoid have sex. I would love to welcome aces from various spectrum in terms of their attitude towards sex. I think it will help to explain that not all aces are the same; just like not all straight people, or gays, or lesbians, or bisexuals are the same.

Some aces enjoy sex. Some aces don’t. Some aces develop their sexual attraction after emotional bonding with the other person. There are quite a lot of us, and I’d love to see it being explored.

As a reader: Is it important to you whether a story with an asexual MC’s is written by someone on the ace-spectrum?

As long as authors do proper research and treat asexual characters with respect, I believe even allosexual authors can write a GOOD representation of asexuality. I mean, you don’t need alien author to write a good story about aliens, do you?

If people would just learn one thing about asexuality today, what would you like that thing to be?

Well, that asexuality is real. It’s not a mythical unicorn.

Do you identify yourself as someone included in the “Queer-Umbrella”?

Personally, I prefer asexuality to stand under its own umbrella. I know that the term LGBTQIA or QUILTBAG (this term becomes more mouthful *laugh*) means to include asexuality in it. However, because asexual means that we don’t have sexual attraction compared to the other letters in that queer umbrella, it’s easy for us to be ‘forgotten’. Does that make sense?

What would you tell someone who’s struggling with their own asexuality? Maybe they’re wondering where they fit in the spectrum, or maybe they’ve just realized they do fit but don’t really know where that leaves them now.

I will point them to AVEN (www.asexuality.org) – that forum is VERY HELPFUL for me personally. There are a LOT of people sharing experiences, and I’m sure one of them will connect to the person still struggling. It’s that “oh, that’s me!” moment that can help because you know that you’re not alone.

And finally: Rec us a book with an ace main character! 🙂

All the Wrong Places by Ann Gallagher (a.k.a L.A. Witt) and Strike Up the Band by Sam Burns. Yes, I recommended two not one. But I loved them, so you just have to deal with it *lol*