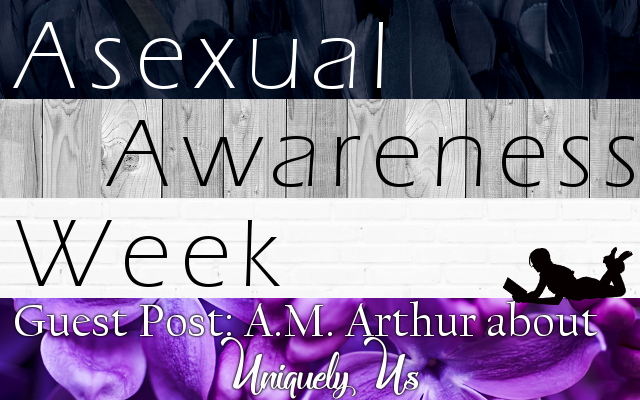 Hey, y’all! I’m A.M. Arthur, and I’m thrilled to be here at From Top to Bottom Reviews to celebrate Asexual Awareness Week. This time last year was the first time I publicly posted my own story about realizing that I was part of the asexual spectrum, and I was humbled to know that speaking up helped other folks out there realize the same thing. That there is absolutely nothing wrong with them, and they aren’t alone.

Many of you may not know that I’m an author of queer romance, and I’ve written characters across the sexuality spectrum: gay, bisexual, pansexual, trans, and more recently, asexual, as well. My first asexual character, Benji Moore, appeared in my February m/m/m rock star romance Hot Licks, and it was a bit of a terrifying experience, because I worried readers wouldn’t connect to or understand Benji. But they did, and I’m grateful, not only as an author but as an ace-spec person.

But I’m here to talk about a different book. Uniquely Us is the third book in my US series, which previously featured another m/m/m pairing. The two heroes of Uniquely Us were side characters in those books, and while one hero, Taro Ichikawa, identified openly as demisexual since his first scene, the second hero, Dell Greenwood, was more of a mystery. I knew Dell had a troubled past, and he struggled with addiction and other health issues. It wasn’t until late in drafting book two in the series that Dell revealed he was dealing with potentially being asexual, as well.

I always knew I’d give Taro a book, but it wasn’t until that moment that I knew his hero would be Dell, and fans of the series were already asking if they’d end up together. The idea of writing two ace-spec characters in one book was daunting—not only in writing ace and demi guys navigating a romantic relationship, but also possibly a sexual one. I put a lot of my own emotional journey into Dell’s story, in his desire to be “normal” like other people (spoiler alert: asexuality is completely normal), and in his habit of putting the emotional needs of others before his own.

The other challenge in writing this book was I’m very well known among my regular readers for writing angsty stories, and for putting characters through hell, either in the present or in their back story. Dell and Taro were no different in having dramatic histories, so the challenge there was making sure readers understood that they were not ace/demi because of anything that happened to them in the past. There’s a persistent myth about ace-spec people being that way because of trauma or past sexual abuse, but you’re born asexual the same way someone is born gay, straight, or anywhere else on the sexuality spectrum. Hopefully I succeeded in handling those challenges well, but only you can judge that.

In a complete twist of fate, I scheduled Uniquely Us’s release date for October 24, and I was stoked to realize it was during Asexual Awareness Week. The timing couldn’t be more perfect to bring this particular romance to readers. Thanks for listening to me ramble!

Taro Ichikawa needs his weekly routines. Working from home as a programmer allows him to work around his constant struggle with anxiety and OCD—everything from exact meal times to his weekly dinner dates with his best friend Cris Sable. Openly demisexual, he’s comfortable knowing he’s different from most, and he’s content being single—until he breaks routine to attend Cris’s birthday party and makes an unexpected new friend.

Befriending someone mired in strict routines isn’t easy, but Dell is stubborn when he wants something, and being patient with Taro is easy. From emails to tentative lunch dates, what begins as a simple friendship slowly deepens into something much stronger—and completely unexpected. But Dell knows that for him to be all-in with Taro, he not only needs to come to terms with his sexuality, but he also has to be honest with himself and his family about the absolute worst moment of his life.

A.M. Arthur was born and raised in the same kind of small town that she likes to write about, a stone’s throw from both beach resorts and generational farmland.  She’s been creating stories in her head since she was a child and scribbling them down nearly as long, in a losing battle to make the fictional voices stop.  She credits an early fascination with male friendships (bromance hadn’t been coined yet back then) and “The Young Riders” with her later discovery of and subsequent love affair with m/m romance stories.

An avid reader of het romance, her first foray into reading published m/m romance (slash fanfic doesn’t count) is thanks to a Dear Author review of K.A. Mitchell’s CHASING SMOKE. After devouring K.A.’s existing backlist, she dove headfirst into other authors. While she prefers contemporary, she’ll occasionally sample an historical or SFF m/m romance.

A.M. wrote her first m/m stories in the guise of Kish fanfic (the Kyle/Fish romance from cancelled soap opera “One Life to Live.” As her stories were met with more and more positive feedback, A.M. was inspired to try her hand at creating original m/m romance. And the rest is history.

When not exorcising the voices in her head, she toils away in a retail job that tests her patience and gives her lots of story fodder.  She can also be found in her kitchen, pretending she’s an amateur chef and trying to not poison herself or others with her cuisine experiments.