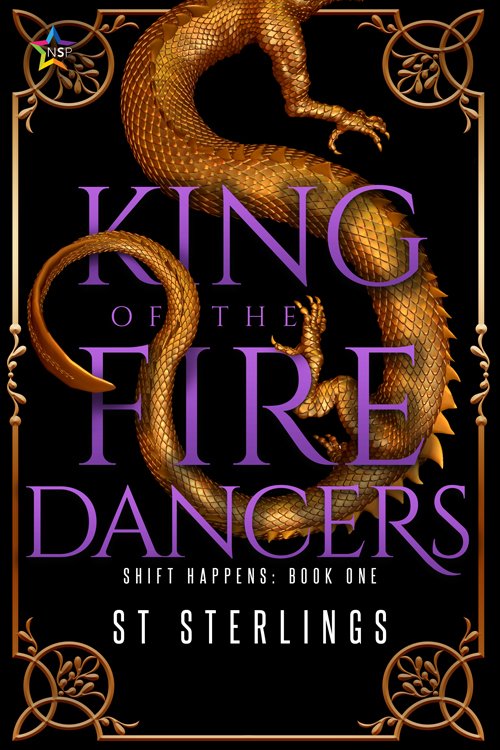 When he’s propositioned by a wealthy stranger, it seems Coy Conlin’s impoverished life is about to be upgraded. But before he can share the news with his family, he comes home to find his grandmother murdered and his little brother missing. To make matters worse, he’s thrown in prison along with every other shifter under the Sovereign’s orders.

August Seaton left his laboratory job at the Asuda Registry to become a Registry officer. But after a mission with his partner goes horribly wrong, August ends up with Coy’s dead grandmother on his hands, and Coy thinks he’s the murderer. Worst of all, his partner discovers his secret.

August is a shifter. And now he’s Coy’s cellmate. Coy and August must survive each other, abusive guards, and a scientist hell-bent on forcing Coy into a breeding program.

Teamed up, the pair escape prison and journey across the country. With the Registry hot on their trail, they have enough things to worry about. Falling for each other wasn’t supposed to be one of them.

*I received a free copy of this book from Ninestar Press

This is a hard one guys. I am *still* struggling with how to rate and review this book. I’ve been sitting on it for a while.

Initially this book was almost a DNF. At about the 25% mark I think, I just felt like I could no longer muster the interest. It sat on my kindle for an age before I finally decided to give it one more try. The premise of the book sounds awesome. However, the initial third of the book is slow,and at times disjointed (although now that I’ve read the book, I can see how what seemed like a random thing that happens with Coy was not actually random, so shame on me as a reader there). But Coy came off as unlikeable in a way that didn’t inspire me to want to get to his redemption (if that’s what the author was going for). He’s not a bad guy, just…somewhat unlikeable at first? August was hard to read and it was clear there was more to his story, but again, I wasn’t inspired to find out what it was initially because the pace was slow.

I was initially glad I gave the book another shot, because it definitely picked up and got a LOT more interesting, particularly once we find out what Augusts’s secret is. I was reading this book and messaging my co-reviewer Annie the whole time, so she got first row seats to my sudden OH EM GEE this is great!

Here is my biggest concern/issue with the book. There is a scene at the end of the book where August is drugged by another person — it’s a date rape sort of drug that makes him very turned on — and he makes many passes at Coy, who initially rejects him because he clearly understands that August is unable to consent.

But then at some point, August is so hard to hold off that Coy ends up giving in…a little? Or what he thinks is a little. I’m going to share some quotes here:

“Something hidden deep down inside of Coy, something that he’d been pretending had not existed, reared its ugly head. It was a voice that told him that, although it was a bad idea, he should do it anyway. That he should give the poor man what he wanted. Look at him, pinned against the wall, breathless and needy, and begging to be fucked.”

So…he decides he should do that.

“He would not fuck August. He wanted to, but…he wouldn’t. August was drugged — and a virgin. Still, Coy could give him a preview of what to expect in case this happened again when August was sober.”

Basically, he gets August naked, is touching his genitals, they are both going to get off, but he won’t fuck August without consent?

So. Here’s the thing. The book was interesting, and I want to know what happens (it ends on a cliffhanger). And as a voracious reader of many things, I would not always DNF a book for containing non-consensual scenes. But this isn’t framed as noncon for a plot purpose — it’s framed as “he wanted it”. This is a character understanding that someone cannot consent but giving in because the drugged person is “begging” for it.

That my friends, is insidious rape culture. I cannot speak for the author, but this scene is framed in a way that seemed like the author was trying to straddle that line but trying to make it okay. But it’s not. And I don’t see how any of this was necessary? Yes, what happens here precedes August loosing control and revealing his secret to Coy. But this could have happened in a number of ways that didn’t involve Coy having sex — or trying — when August could clearly not consent. I don’t particularly care that he wasn’t planning on penetrating August, because I don’t think that rape is confined to penetration.

In the end, I liked so many aspects of this book. Once the pace picked up, I was hooked. Barring that scene, this book would have been a solid 3.5 for me. And I honestly think that the author is talented and has a lot to offer. But I cannot in good conscience promote a book that perpetuates this aspect of rape culture. I’m not only a survivor of sexual assault, but I know MANY other women AND men who are as well, some of whom too were told they were “begging” for it, or who have been (including myself) told it wasn’t rape for a variety of reasons, including lack of penetration. But it was. It was.

I’ve thought a lot about this review — I wrote it a week ago — and if I was really comfortable sharing this. And in that time, the thing that has really come to me and stayed with me is the fact that this is the third problematic book I’ve seen come from this press. I’ve loved many books and stories coming from Nine Star. But if you read my review of Elias, you know that I really did not take well to the way that many aspects of the story, including sexual abuse and rape, were handled. After reading Elias, we were offered another MS for a book I had to DNF, that I wrote a long review for that also had super problematic scenes where non-consensual things happen that are not addressed or handled well at all (they’re glossed over and actually lead to sex). When we went to post that review, we discovered that the book had been pulled and we were never informed. I’m guessing (though who knows) that at some point someone alerted the publisher as to how problematic the book was. While this gives me hope that reader/reviewer voices are heard, I’m still disheartened to see that these books are being published and sent out, 2/3 of which were released and gone into the world.