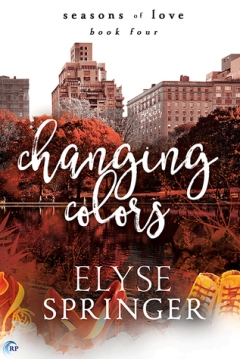 Tony Quinn has a knack for figuring people out. He likes labels, likes to be able to put everyone and everything in tidy boxes. As a theater director, it allows him to run a production without too much drama. But when he meets Gentry—“call me Gee”—in a bar one night, he discovers that some people aren’t so easily defined.

Gee Parnell is unlike anyone Tony has ever met before. He refuses to conform—to Tony’s expectations, or to society’s gender roles. He’s sexy and flirtatious, unapologetic and unashamed. And Tony isn’t sure he’s okay with that. So he breaks things off and escapes back into his well-ordered life.

But then an attack leaves Gee bloody and bruised, and Tony realizes that he isn’t ready to lose him. Not only is the passion between them off the charts, but Gee shows him a different way of understanding people. However, an exciting new job opportunity means that Tony has to decide between hiding his sexuality and his relationship with Gee, and his newfound appreciation for the color and beauty Gee brings to his life.

How do I even review this book that broke me, made me cry and had me rooting for the protagonists from the get-go. The moment I started it I could not put it down. And I expected that… but at the same time I was surprised by how much I needed to get back to these characters as soon as I could. Changing Colors is the conclusion in Springer’s Seasons of Love series and for me the definite favorite; with Thaw a close second. (A really close second!)

Those who have followed this series will know Tony, one of the main characters, already. I really liked what I saw of him in Heat Wave so I was really excited to read his story.  The time when Tony and Gee first meet initially overlaps with the events in Whiteout, but then jumps forward a couple of months. This way the reader knows that Tony made a mistake and let Gee go, but we have no idea what happened. Only thing we know is that he knows he fucked up and wished he could have a second chance.
When I went in I totally expected him to be my fave, but along came Gee and Oh em Gee! – he’s absolutely brilliant. I loved how he’s so unapologetically himself. I love and admire him equally, because he does not care what others think about him. No, I have to rephrase that, because of course he cares. He’s human and shitty people doing shitty things hurt him the same as everyone else. But he doesn’t change or hide for anyone. If you don’t like the package you’re getting, then he’s out.

Tony on the other hand really cares about what others think of him – which is why he fucked up the first time with Gee. He was so afraid about what others might think of him that he let something great go. It’s a slow progress, but over the course of Changing Colors Tony realizes that even if he has the best job – one that’ll bring him a lot of recognition and is great for his career –  it won’t make him happy if he has to lock up part of himself. This change seemed natural and while at times I wanted to shake Tony because he was SO irritating, I also loved him. Gee turned his world upside down and he really was trying, but sometimes took a wrong turn or two (again). I know that this will probably be a thing other readers won’t like, but I absolutely loved it.

There is so much I loved about this story. One thing is how Springer did not fall into those stereotypical roles between “weaker” and “stronger” protagonists – but went ahead and put them upside down. Gee is gender non-conforming – he wears what he feels comfortable in and what makes him feel pretty. If that’s lipstick, a dress and heels so be it. The next day he might just like a bit of eyeliner and less feminine-cut clothing. But that doesn’t make him less of a man – a fact that Gee repeatedly calls Tony out for (unintentionally) assuming. I adored and learned something from it too.
I’m sitting here, trying how to best put it and it all comes down to the fact that we are taught to fit into boxes – like Tony tries so hard to put Gee into at first. It’s sometimes just a small thing like holding a door open for the other one – something at least I was brought up thinking was, what guys had to do because it’s polite. But then comes Gee and makes you realize that… just fuck the patriarchy! And fuck trying to fit into boxes because we don’t all fit neatly into a box you can label and put away. Labels are a great thing if you choose them, but can also be restricting. Especially when trying to put others into a neat category.

This play with the gender (and other) stereotypes is one of my favourite thing for authors to do. I love when characters are not as perceived – like the jock who is not stupid, the femme guy who is 99% a top or the geek who isn’t shy and insecure. (This kind of went down a direction I hadn’t anticipated.) What I mean is that I think Springer handled this exceptionally and I really, really loved it.

One last thing I want to mention is that I LOVED that when things came crashing down around Tony, he gives Gee space when he asks him to and doesn’t force a happy end on his terms! It’s something I wish we’d see more of in romance because it’s honestly not romantic when you have to “wear down” your love interest until they finally take you back. It being their decision, without influence, is one of the most romantic things you can do and something that will make me 100% believe in the happy end. And that’s something I undoubtedly do with Gee and Tony.