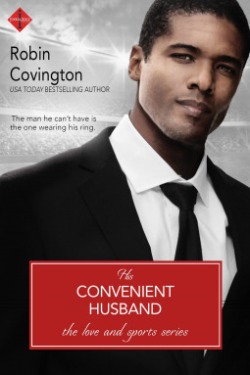 NFL football player Isaiah Blackwell lost his husband three years ago and is raising their teen son alone. He lives his life as quietly as his job allows, playing ball to support his family but trying not to draw unwanted attention. His quiet life is shaken up when a mutual friend introduces him to Victor, a visiting principal ballet dancer who is everything Isaiah is not.

Brash and loud, Victor Aleksandrov has applied for political asylum to avoid returning to Russia, where gay men are targeted and persecuted. He’s been outspoken about gay rights in his home country, and if he doesn’t get asylum, going back to Russia is a death sentence.

Their one-night stand turns into a tentative friendship, a relationship they both agree is temporary… until Victor’s denied asylum. Isaiah can’t offer Victor a happily ever after, but he can propose something that’ll keep Victor in the US and safe… marriage He just doesn’t expect his new husband to dance away with his heart.

Two things initially drew me to this book:

2. The cover. Few books feature a person of colour on the cover. And especially sports/football romance are so white, it’s just ridiculous. But His Convenient Husband has an afro-american NFL-player AND he’s on the cover. Two things that made me all the more excited to read this book.

In the end I had mixed feelings about this story. Mostly because I had expectations based on the blurb, and then I got something different. As I mentioned above, a previous version of the blurb said that Victor is genderfluid. But he’s not. He’s an effeminate gay man who likes make up and to wear androgynous clothes. I realise though that someone who picks the book up once it releases won’t have the same expectations as I did.
One thing I absolutely loved about His Convenient Husband, was that it just drew me in. I love it when a book can excite me right from the beginning. The writing was engaging and flowed really well. If it weren’t for my job I would have definitely read this in one sitting. In the blink of an eye I was almost halfway through the book – I couldn’t wait for my lunch break so I could read more of it! The chemistry and first attraction between Victor and Isaiah is palpable and I found the side characters vivid and fascinating. I loved Isaiah’s agent – and Evan, Isaiah’s son is just amazing. I really hope that one day he’ll get his own story because he’s so fierce and has got SO much charisma; I’d just love to read more about him.

I really liked Victor, he is, apart from Evan maybe, definitely my favourite character in this story. I loved his outspokenness and was definitely rooting for him to get his happy end. I was hurting with him Isaiah on the other hand was (sometimes) a really frustrating character. I do like him, and I believe that his isn’t intentionally hurting anyone around him. I understand and appreciate that he wants to protect his son. It’s fantastic that Evan is his first priority – as he should be in this arrangement! BUT Isaiah really has a problem to just listen, sometimes.
His son is 14 years old and definitely will make stupid decisions. And Isaiah can’t protect him from everything. Especially because Victor technically is Isaiah’s husband and therefore Evan’s step-dad, even if it’s just out of convenience, but Isaiah can’t expect his 14 year old son not to be inspired by Victor or try to be a bit more like him. Even more so because I feel like Isaiah should realise that his son is possibly genderqueer. At the very least gender non-conforming – Evan loves to wear dresses and to experiment with make-up. And he’s done this even before Isaiah and Victor met.

When things blew up, I just needed way more groveling on Isaiah’s part to believe him and that he was actually in it permanently. Whenever something happened, Isaiah would just blindly make Victor responsible for it – completely disregarding that Evan is his own person, with his own decisions and mistakes to make. Evan was inspired by Victor, who continued to speak out about the situation for gay men in russia. And Isaiah knew this when he married Victor. He knew it! So throwing Victor’s activism in his face whenever things didn’t go the way Isaiah wanted them to, really annoyed me.

Nevertheless – even though Isaiah is thick-headed and stubborn, I still really enjoyed this book. I can’t wait to read the sequels in this series and to see Victor, Isaiah and Evan again. Recommended!

A USA Today bestseller, Robin Covington loves to explore the theme of fooling around and falling in love in her books. Her stories burn up the sheets. . .one page at a time. When she’s not writing she’s collecting tasty man candy, indulging in a little comic book geek love, and stalking Chris Evans. Don’t send chocolate . . . send eye candy! Robin’s books have won the Golden Leaf Award and finaled in the Romantic Times Reviewer’s Choice, the Book Seller’s Best and the National Reader’s Choice Awards. She lives in Maryland with her handsome husband, her two brilliant children (they get it from her, of course!), and her beloved furbabies.