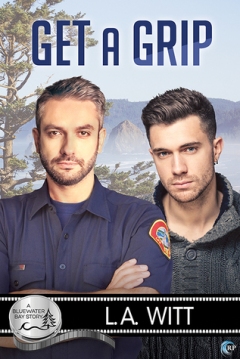 A year after his divorce, Shane Andrews isn’t interested in dating—not that he has time, between three kids and a demanding job as a grip. When a windstorm knocks a tree onto one of the Wolf’s Landing soundstages, Shane’s there to help with the mess . . . and so is firefighter Aaron Tucker.

A former smoke jumper, Aaron’s an adrenaline junkie and way too restless and reckless to be relationship material. As far as he’s concerned, monogamy is for penguins, and he’d rather be alone than tied down. Signing up to be a stepparent? No, thank you.

But after a scorching-hot night together, they’re hooked. Aaron is a taste of the excitement Shane’s been lacking, and Shane’s pushing buttons Aaron didn’t know he had. The more they’re together, the less Aaron craves wild nights with other men . . . but the more Shane wants to play the field like he never got to in his twenties.

This could be the love neither man knew he needed, but only if Shane gets his feet back on the ground before Aaron walks away.

L.A. Witt has become one of those authors I know I can rely on to write a solid story at the least, and another favorite at best. I think Get a Grip might be somewhere close to the latter. It wasn’t my favorite but I also had a hard time putting it down. Which is often the case with books by this author. And I found this to be a great addition to the Bluewater Bay series!

The books where the main characters are so stubborn and blind that they don’t realise they already have feelings for each other – when they’re still like “no feelings; just sex”, but the reader can spot that denial a mile away? Those are some of my faves. I really love that trope because it’s so much fun and I love the anticipation when the characters finally realize that there’s something.
So, Get a Grip was right up my alley and definitely delivered on that.

The main characters couldn’t be any more different. Aaron, the eternal bachelor, a adrenaline junkie who craves what others shy away from, and Shane, the father of three who never had the chance to be wild in his twenties because he became a father at quite a young age. He’s divorced for the second time and really isn’t looking for anything permanent, so when he meets Aaron he seems like the perfect guy to have fun with. I love these “they don’t fit, but then they’re perfect for each other”  kind of stories.
They first meet when Aaron helps to clean up a fallen tree on set of Wolf’s Landing. While there’s attraction there, they don’t act on it because of the uncertainity if the other is interested too. But later that evening they come across each other’s Grindr profiles – I guess I don’t have to say what happens next. 😉

I loved their chemistry and their easy banter. Both agree to have a friends with benefits kind of arangement but of course, feelings happen. The whole time I sat there holding my kindle, grinning like a fool and turning the pages as fast as possible.

One thing I absolutely adored about this story was that there was no evil-ex. Shane was on good terms with his ex, and said ex was still involved in the kids life despite not being related to that. We don’t see that often enough in romance! Give me the ex-spouses who are still friends with each other. Who are not backstabbing assholes using the kids as bargaining chips!

I loved how Shane put his kids first in everything – although I did want to shake him when he just wouldn’t see that being with Aaron was a good thing! But alas, they got their happy end, and I was thoroughly satisfied by it. Most definitely recommended!

L.A. Witt is an abnormal M/M romance writer who has finally been released from the purgatorial corn maze of Omaha, Nebraska, and now spends her time on the southwestern coast of Spain. In between wondering how she didn’t lose her mind in Omaha, she explores the country with her husband, several clairvoyant hamsters, and an ever-growing herd of rabid plot bunnies. She also has substantially more time on her hands these days, as she has recruited a small army of mercenaries to search South America for her nemesis, romance author Lauren Gallagher, but don’t tell Lauren. And definitely don’t tell Lori A. Witt or Ann Gallagher. Neither of those twits can keep their mouths shut . . .