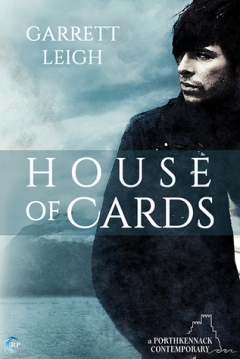 Calum Hardy’s life has unravelled. Reeling from the betrayal of a man he once loved, he boards a train heading south, with no real idea where he’s going except a world away from London.

Brix Lusmoore can hardly believe his eyes when he spots one of his oldest friends outside Truro station. He hasn’t seen Calum since he fled the capital himself four years ago, harbouring a life-changing secret. But despite the years of silence, their old bond remains, warm and true—and layered with simmering heat they’ve never forgotten.

Calum takes refuge with Brix and a job at his Porthkennack tattoo shop. Bit by bit, he rebuilds his life, but both men carry the ghosts of the past, and it will take more than a rekindled friendship and the magic of the Cornish coast to chase them away.

Reviewing this was hard because I really liked it but because I expected something completely different  – and not so somber – it took me a while to get into the story. I have read every book by this author and Garrett Leigh is an auto-buy kind of author for me.

One thing you can count on is that Leigh does not write fluffy, happy stories. It’s guaranteed that she will hit you in the feels. Both Brix and Calum have their own burdens to bear and they’re not light ones. House of Cards starts with Calum walking in on is boyfriend cheating on him. He has done so before but this time Calum just leaves the apartment, goes to the train station and buys a ticket to somewhere far away. This is how he ends up in Porthkennack, where Brix finds him stranded at the station.

Brix and Calum are no strangers, they knew each other before Brix left London. Calum was Brix apprentice in his tattoo shop and they were close friends. But it’s been years since they saw each other, and a lot happened since then. Nowadays Brix rescues chickens when he’s not in his tattoo shop, or dealing with his family. When Brix finds Calum slumped over on a bench outside the train station he can’t not help him. Even though he abruptly left London, he never stopped caring for Calum.

From the first moment I met Calum and Brix I wanted to know more about them, and I loved witnessing them reconnecting, getting to know each other again and helping the other to heal. They complement each other perfectly. Brix doesn’t only give Calum a place to live, he also gives him a home. And Brix so desperately needs someone he can let his walls down with and someone who takes care of him for a change. I loved how Leigh handled the characters reconnecting again. It takes them time and is a slow process, but by the end of the novel I had no doubts that their relationship would hold for a long time.

House of Cards is very character driven. There is no added – unnecessary – drama. It’s a very quiet and solemn kind of story. And for me that’s where my expectations hindered my enjoyment of it. I knew going into this, that it wouldn’t be a light story – they never are for this author – but I didn’t expect it to be so gloomy and just would have liked something a bit more hopeful. I’m not saying there is no hope in this story, but it takes a bit to show.

One thing I really, really loved about House of Cards though was that the surroundings really came to life on page. I fell in love with Cornwall in this story – I could almost taste the salty air of the Cornish coast, feel the rain and the rough wind on my skin.

If you’re looking for a quiet read, that’s rather somber and without a lot of drama and action, then this is definitely for you!

Garrett’s debut novel, Slide, won Best Bisexual Debut at the 2014 Rainbow Book Awards, and her polyamorous novel, Misfits was a finalist in the 2016 LAMBDA awards.

When not writing, Garrett can generally be found procrastinating on Twitter, cooking up a storm, or sitting on her behind doing as little as possible, all the while shouting at her menagerie of children and animals and attempting to tame her unruly and wonderful FOX.