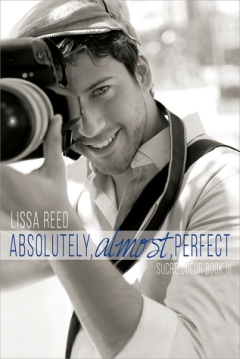 Craig Oliver and Alex Scheff lead a charmed life. Craig is part owner of Sucre Coeur, the bakery he’s loved and managed for years. Alex is an up-and-coming Seattle photographer. Their relationship has been going strong for a year, and everything is absolutely perfect—right up until Craig receives a wedding invitation from his long-estranged brother.

As Craig grows tense over seeing his brother for the first time in years, Alex can’t control his anxiety over meeting Craig’s family. At the wedding in an English hamlet, boisterous Scottish mothers, smirking teenage sisters, and awkward ex-boyfriends complicate the sweet life they lead.

Hello everyone! We’re thrilled to welcome Lissa Reed, author of Absolutely, Almost, Perfect on From Top to Bottom Reviews today! We had a little interview with her and hope you enjoy it! And without further ado:

Hi Lissa, thank you for visiting us today. Tell us a little about yourself, your background, and your current book.

Hi there! I am a writer, a knitter, and foodie nerd living in DFW who works in banking by day and scribbles down entertaining lies by the bucketload by night. Absolutely, Almost, Perfect is the third and final book in my Sucre Coeur series, a trilogy focused on the love lives of employees at a popular Seattle bakery.

“You should write something about Richard Curtis,” my editor told me on the phone recently, presumably because every time I would talk to her excitedly about my third book, I would bring him up.

I had my reasons for this. All of the books in the Sucre Coeur series are homages to some of my favorite screenwriters – I likened Definitely, Maybe, Yours to early Cameron Crowe, and felt that Certainly, Possibly, You was a bit of a Nora Ephron sort of thing, but with a lesbian and a bisexual woman falling in love. Absolutely, Almost, Perfect, set in England around the events of a wedding, well, of course that was going to bring to mind Curtis’ Four Weddings and a Funeral, wasn’t it? Early drafts of Certainly actually ended with a direct, explicit reference to it. I named my mood-setting Spotify playlist One Wedding and One Potential Funeral, for heavens’ sake. Ha-ha, all very amusing.

The thing is, when I started to look more into Richard Curtis’ other work, I swiftly realized that as far as formative influences go, he is by far the very most formative one in my life, ever, full stop. I have named influences and inspirations before – John Irving, Neil Gaiman, Jennifer Saunders, all sorts of funny, interesting people. I have never once named Richard Curtis, because I was ignorant of how deep that rabbit hole went!

However ill-advised it might have been of my mother (an otherwise wonderful and intelligent woman) to idly allow me to read Irving’s The World According to Garp when I was twelve, it was probably equally ill-advised that she let me start to watch Blackadder on PBS and A&E when I was ten. The crush that fifteen-year-old Lissa developed on Alan Cumming that persists to this day? A direct result of Christmastime showings of Bernard and the Genie. The idea that I should be loved exactly as I am? Hello, Bridget Jones’ Diary. And of course, there’s the Holy Grail Trinity of British Romantic Comedy: Four Weddings, followed by Love, Actually, and then Notting Hill.

Also, as a person who has coped with clinical depression for much of her life, of course one of my very favorite episodes of the modern run of Doctor Who has been “Vincent and the Doctor.” How about I give you one guess as to who wrote that one.

He’s everywhere. I had no idea. My entire life, Richard Curtis.

If anyone asks me why I’m funny, I used to be able to say pithy things like, “Oh, it’s just natural charm and wit,” or, “I have interesting parents,” and possibly both of these things are true to some degree, but now I have to add, “Well, actually, I think it’s Richard Curtis’ fault,” and then I expect I’m going to have a lot of explaining to do.

But as far as Absolutely goes, as far as it really pertains to Richard Curtis… well. His British rom-com films are their own very distinct genre, with a very distinct tone. They’re real, and awkward, and funny in a slightly less snappy and polished way than your average American rom-com. Even when they’re full of posh folks with giant hats, or Hugh Grant as a prime minister, or a broke disaster, or a diffident store owner – somehow they’re still a little more relatable, just a touch, just enough.

They are my favorites. They make me laugh, and cry, and they make me feel hopeful about love, which is a difficult achievement most days of the year, as I’m a big ol’ fat cynic.

I wanted to write a book that reflected all of that, and that maybe offered a reader the same sort of delight and joy and hope that Richard Curtis’ rom-coms offer to me.

Smelling of soap, a blue bath towel slung around his hips, Craig drops a kiss on Alex’s forehead before he takes his own seat. He slides the Ivory Square of Doom to his side of the table. “Right, we have to work this out.”

“Do we?” Alex cuts a finger of toast and dips it into his egg. He concentrates on the simple task so he doesn’t have to look Craig in the eye. “I mean, really. Neither of us actually wants to go. Why can’t we just RSVP with a sad but firm no and send them the nicest thing on their registry?”

Silence stretches long enough that he does look up. Open-mouthed, Craig stares at him. A forgotten toast finger drips egg yolk onto the tabletop. “You…” Craig shakes his head and puts down the toast. “You spoke to my mother. Many times you faced this woman on Skype or Facetime and had actual conversations with her, and you still somehow think that is a reasonable course of action.” His eyebrows lift, and he lets out a low whistle. “You know, I’ve held your balls in my hand. Were they brass all this time, and I just missed it?”

“Oh, come on, Craig.” Alex runs a hand through his hair. “Yes, I spoke to your mother. She’s nowhere near as scary as mine.”

“See, now, there’s an excellent reason for both of us to go to this damn wedding, so I can show you in person exactly how wrong you are.” Craig lifts his mug of tea and coughs out a laugh. “Your mother is frightening, I grant you: half my size and twice as intimidating as I can manage on my best day. In fact, our mothers would get on like houses afire, which should give you an idea as to why I, at least, cannot get out of going to this wedding.” He takes a sip of tea, sets the mug aside, and reaches over the table to catch Alex’s hand in both of his. “Alex, even apart from my mother’s insistence… Chloe is one of my oldest friends. I have to do this for her. But I can’t do it without you. I know it won’t be easy, but I need you there with me.”

At the sight of their joined hands, a lump grows in Alex’s throat to match the one in his stomach. “It’s just… your family…”

Silence falls again, interrupted only by Fitz tap-tap-tapping across the checkerboard linoleum of the kitchen floor and whining to be picked up. Craig scoops him up and scratches Fitz’s fuzzy little ears. “They won’t bite, Alex. They’re just…”

“Just people, just your family, I know.” Alex’s chest tightens. “Just your mother, your father, your sisters, your brother who you don’t even like, and I guess there’s an Aunt Lorraine now, and this Chloe chick and God knows who else gathering for the Wedding of the Century, where they’ll get to meet Craig’s neurotic train wreck of a boyfriend and judge us. They’ll judge me for being an uptight, deadbeat American and you for clearly having some kind of episode, to decide that I was an appropriate choice for a boyfriend.”

The lump in his throat swells and cuts him off.

Other Tour stops to check out: 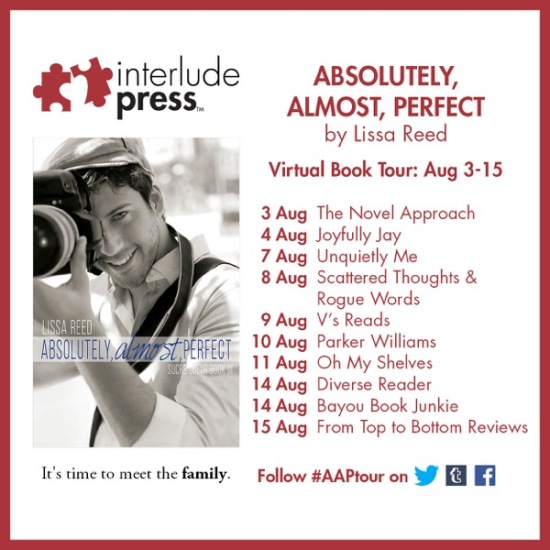 Lissa Reed is a writer of ﬁction, blogs, and bawdy Renaissance song parodies. She traces her early interest in writing back to elementary school, when a teacher gifted her with her ﬁrst composition book and told her to fill it with words. After experimenting with print journalism, Reed shifted her writing focus to romance and literary ﬁction and never looked back. She lives in the Dallas-Fort Worth area. Absolutely, Almost, Perfect is the third book in her Sucre Coeur Series.