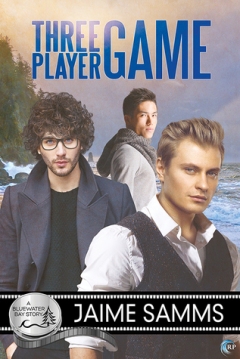 Vince’s life has improved immeasurably since he moved to Bluewater Bay two years ago. He’s gone from working for a man he hated, to helping found a company he believes in. And he and boyfriend, Pete, have built a delicate balance of power between them that keeps them both grounded and thriving.

Pete’s job on the set of Wolf’s Landing is demanding. He needs lots of downtime off set, and that’s where Vince’s firm but gentle control isn’t always enough. And for Vince, Pete’s constant high-energy needs are turning out to be more than he can handle alone.

It’s no surprise to either of them, then, that sparks fly when Vince’s coworker Lee enters the picture. Outwardly, Lee is tough and confident, but when a bad back confines him to Pete and Vince’s spare room, the cracks start to show and his desire for connection begins to peek through.

Pete and Vince both like what they see under Lee’s prickly outside, but now the three men must learn that love isn’t about beating the game—it’s about balance, trust, and letting each other in.

*a copy was provided via NetGalley

One of the characters said best what bothered me with this story pretty much from the beginning: “You can’t just say there’s a relationship, and then there is one.“

I had a hard time to get into the story because Vince and Pete were already an established couple and they already knew Lee as well. Vince and Lee are coworkers and the whole getting to know each other happened off-page, before the book even started. That made it impossible for me to connect to the characters in any way. I dnf-ed How the Cookie Crumbles by the same author in this series. Since one of the main characters of How the Cookie Crumbles is the boss of Vince and Lee I assume that to really connect with the characters you have to read that before reading Three Player Game.

What I missed the most was communication between each of them. You can’t just decide you’re in a relationship and Ta-Da! everyone is happy and in love. I find this hard to believe – especially in a poly relationship. Throughout the whole book – at least up until I read it – Vince and Pete say that they have to agree on what to do because it was their relationship first, and they don’t want to destroy what they have by bringing in a third. Their actions though are different. It’s always one of them deciding on their own and only afterwards telling the other about what they did. That just didn’t work for me.

Personally I really disliked how Pete and Vince try to run Lee’s life as if he is not capable of doing it alone. And the way they didn’t listen to what Lee wanted was really annoying. So all in all this really wasn’t the book I had hoped it would be. I am really looking forward to the next book in this series though.

If you’re looking for an awesome poly story check out Misfits by Garrett Leigh or The Art of Three by Erin McRae & Racheline Maltese.

Jaime has been writing for various publishers since the fall of 2008, although she’s been writing for herself far longer. Often asked, “Why men? What’s so fascinating about writing stories about men falling in love?”, she’s never come up with a clear answer.  Just that these are the stories that she loves to read, so it seemed to make sense if she was going to write, they would also be the stories she wrote.

These days, you can find plenty of free reading on her website. She also writes for Freya’s Bower, Jupiter Gardens, and Total E-Bound, Dreamspinner Press, MLR Press, and Riptide Publishing.

Spare time, when it can be found rolled into a ball at the back of the dryer or cavorting with the dust bunnies in the corners, she’s probably spending crocheting, drawing, gardening (weather permitting, of course, since she is Canadian!), or watching movies. She has a day job, as well, which she loves, and two kids, but thankfully, also a wonderful husband who shoulders more than his fair share of household and child-care responsibilities.

She graduated some time ago from college with a fine arts diploma, and a major in textile arts, which basically qualifies her to draw pictures and create things with string and fabric. One always needs an official slip of paper to fall back on after all. .