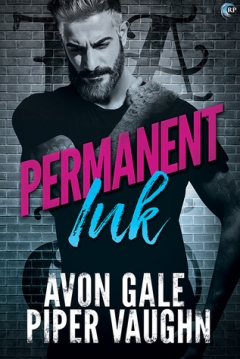 At twenty-three, Poe Montgomery is going nowhere. He still lives in his father’s basement and spends most of his time tagging with his friends. When an arrest lands him in debt, Poe accepts the front desk job at Permanent Ink, the tattoo shop owned by his father’s best friend, Jericho McAslan. Jericho is nearly twice Poe’s age, but with his ink and prematurely graying hair, he quickly takes the starring role in Poe’s hottest fantasies.

Jericho is known for his ability to transform poorly designed tattoos into works of art, but he was once as aimless and misdirected as Poe. Wanting to pay it forward the way someone once did for him, Jericho makes Poe his apprentice and is determined to keep things strictly professional. Easier said than done when Poe makes his interest—and his daddy kink—abundantly clear.

Jericho can’t resist Poe or their intense chemistry for long. But between the age gap, tension with Poe’s father, and Poe’s best friend calling him a sellout, they’ll need to ensure they’re both on the same page before they can rewrite their rocky start into something permanent.

Hi, I’m Annie and I think I have a problem because I’m obsessed with Permanent Ink. I’ve read this at least four times now? First as a draft and then again and again until it was finished. Sometimes I just go back to read a favourite scene of mine – I just love the whole thing so much. It could only be more my thing if one of them was a hockey player; although Jericho is a hockey fan (a Blues fan!!), so there is an aspect of hockey in there, making this pretty much the perfect book for me.
I love a well written May/Dec story and can’t get enough from sassy, snarky characters like Poe. That paired with Jericho, a tattoo artist and rather dominant character, plus the Daddy-kink I didn’t know I loved reading – and I’m in heaven.

When he get’s in trouble with the law for tagging anothing building with his friend Blue it’s the last straw for Landon, Poe’s father. During his next tattoo appointment with Jericho, Landon vents about Poe’s most recent run in with the police. Jericho – who is in need of a new receptionist – offers to let Poe work at Permanent Ink.
Jericho wants to pay it forward because once upon a time someone helped him out and gave him perspective. He wouldn’t be owner of Permanent Ink without Chris, his mentor’s, help. Jericho can relate to Poe and he thinks it might help to get him on a straight path. What he did not expect was that Poe is a little shit that loves testing boundaries.
At first the two clash a bit, because Poe doesn’t see the job as anything serious – he’s only doing it because it’s not as boring as the job as a cashier at the gas station. Jericho was already aware of Poe’s artistic talent – he had see some of Poe’s grafitti before – but when he notices Poe drawing in the shop he offers him an apprenticeship.
The more time Jericho spends with Poe, the more their mutual attraction grows. Poe – who know’s exactly who he wants – doesn’t hold back and lets Jericho know that. At first Jericho is hesitant because Poe is his best friend’s son, but he can’t resist the attraction for long.

I literally fell in love with Poe maybe 10 sentences into the first chapter. I just was a goner the first time he snarked back at his dad.
Out of both of the main characters Poe clearly is my favourite. I do love Jericho too, but I want to be besties with Poe! To me he’s definitely not fictional and I won’t listen to anyone who says otherwise! 😉 I feel like I could get up in the morning and meet up with him. As a character he’s so fleshed-out – with flaws and doubts every young adult has; he has a bit of a temper and doesn’t have the experience you get with age, but at the same time he does know what’s right and wrong. He’s strong and determined. In some aspects he knows exactly what he wants (like Jericho for example. ;)) And in others he’s still very much a 23 year old who doesn’t know what he wants to do with his life. Poe just enjoys tagging with Blue, but is otherwise a bit aimless. To earn some money he has a job at a gas station as a cashier, but of course it’s not something he wants to do for the rest of his life – at the same time he’s drifting and not doing anything to figure out what he does want to do. This aimlessness, the determination and his smartass-ness made him very relatable to me.

Throughout the story particularly Poe does a lot of growing up. And I loved seeing him figuring out what he wants to do and realize that he can’t only live his life doing graffiti with his best friend.

I love the story, the characters and just everything about this writing duo works. Gale and Vaughn are amazing at creating fully fleshed out main and side characters, who bring their story to life. They both have this deep understanding of who Poe, Jericho and the minor characters are – and it shows. It gives the reader the sense that they really know the characters as if they were real. I absolutely love that!
Additionally I felt like the surroundings really came to life on page, and damn the two for making me want to go back to St. Louis!
I could easily picture myself walking into Jericho’s tattoo shop to get a tattoo or accompanying Poe and Blue when they hang out at The Pit.
The chemistry between Poe and Jericho is in one word: explosive. They simply belong together.

I mentioned above that I didn’t know that I loved reading Daddy-kink – and perhaps it’s just a Jericho/Poe thing – but I absolutely enjoyed it. I loved how their relationship seamlessly progressed from the trainee-mentor one to being in a relationship at the end of the book. Of course there were a few bumps along the road as they figured out how to navigate the new territory – being in a relationship with your dads best friend/your best friends son is not easy – but it just worked in Permanent Ink. It didn’t feel forced or unnecessarily dramatic, it was realistic and true to life.

It’s not the first book Avon Gale and Piper Vaughn have co-written, but it’s the first to get published and I am really excited for everyone to fall in love with the story just as I did. I am also really looking forward to the second book!

Avon grew up in the southern United States, and now lives with her very patient husband in a liberal Midwestern college town. When she’s not writing, she’s either doing some kind of craft project that makes a huge mess, reading, watching horror movies, listening to music or yelling at her favorite hockey team to get it together, already. Avon is always up for a road trip, adores Kentucky bourbon, thinks nothing is as stress relieving as a good rock concert, and will never say no to candy.

Piper Vaughn wrote her first love story at eleven and never looked back. Since then, she’s known that writing in some form was exactly what she wanted to do. A reader at the core, Piper loves nothing more than getting lost in a great book—fantasy, young adult, romance, sci-fi, she loves them all (and has an over-two-thousand-book library to prove it!). She’s an avid tea drinker, a hockey fanatic, a vintage typewriter collector, and loves to travel so much she has “wanderlust” tattooed on her ankle and dozens of countries on her bucket list. Recently, she discovered the world of nail art and realized she’s pretty handy with a paintbrush—as long as it’s a miniature one.

As a bisexual and Latinx person, Piper takes great pride in her heritage. She grew up in an ethnically diverse neighborhood and strives to put faces and characters of every ethnicity in her stories, so her fictional worlds are as colorful as the real one. She currently resides in the suburbs of Chicago with her husband, son, and a cat that has Piper wrapped around her little paw. Above all, she believes that everyone needs a little true love in their life … even if it’s only in a book.