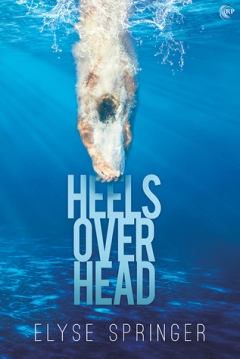 Jeremy Reeve is one of the best divers in the world, and he’s worked hard to get where he is. He intends to keep pushing himself with one very clear goal in mind: winning gold at the summer Olympics in two years. That medal might be the only way to earn his father’s respect as an athlete.

Brandon Evans is everything Jeremy isn’t: carefree, outgoing, and openly gay. With his bright-blue eyes and dramatic tattoos, he’s a temptation that Jeremy refuses to acknowledge. But Jeremy can’t ignore how talented Brandon is—or that Brandon has no interest in using his diving skills to compete.

They’re opposites who are forced to work together as teammates, but Jeremy’s fear of his own sexuality and Brandon’s disinterest in anything “not fun” may end their partnership before it begins. Until a single moment changes everything, and they help each other discover that “team” can also mean family and love.

I picked up this book at Romantic Times (which means I have a beautiful, signed copy).

Heels Over Head is a lovely sports romance centered on a sport I’ve not yet seen written about in this genre. Springer does a great job with the technical aspects of this story. I know nothing about diving other than what I see on the Olympics: this book really takes the reader behind the curtain and into what it takes to be an Olympic level diver (caveat being that since I don’t know anything, I cannot vouch for the 100% accuracy here. It seemed to me, however, that the author did a lot of research).

I tend to be on the fence about novels where a character is closeted, because this is a plot that can easily become overwrought or that can fall on easy clichés. Heels Over Head did an excellent job of making us understand why Jeremy is closeted — it didn’t feel like a cheap plot device used for the sake of sensationalizing it at all.

Jeremy was an interesting character to fall for (as a reader). He was frustrating and fascinating and although I yelled out loud at him a few times, I was absolutely in love with him too. Although I had a hard time with his decision toward the end of the book (I won’t spoil it), Springer’s commitment to the character, and her deep understanding of how Jeremy ticks and how focused he’s been on his goal made this make sense. It would have been easy for an author take an easier route to a happy ending, but it would not have remained true to the character that had been created all through the book.

Brandon is one of those characters that has been developed with an easy charisma that attracted me from the start. Not only was his approach to life, to diving, and to his sexuality great character building, but it was an excellent foil for Jeremy. The characters’ differences didn’t just serve as a tension to teach each other or to grow each other, but to really flesh out well-rounded people with their own issues and obstacles to overcome.

The only reason this book didn’t get a five star rating is because of the way Jeremy’s family speaks to him. I don’t object to the use of homophobic language here in the sense that it’s true to the story and these characters are homophobic. It was more that the dialogue often felt over the top and clichéd. I think that the author could have pulled back on it and it would have served the story even better.