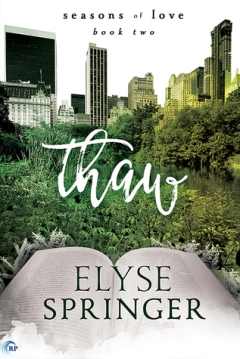 Abigail is content with her quiet life as a librarian. But when she’s invited to a high-profile charity auction, she finds herself dancing with one of the most beautiful women she’s ever met. Abby’s sure she’ll never see her again, but then Gabrielle calls and asks her on a date. And soon after, another.

Supermodel Gabrielle Levesque has a reputation as the Ice Queen—cold and untouchable—except she warms up whenever she’s with Abby. Only Abby isn’t interested in the heat between them; she’s asexual, and she’s worried that admitting as much to Gabrielle might spell the end of their blooming romance.

They’re two different women from two very different worlds, but Abby knows she can love Gabrielle. Her passion for books, travel, and theater prove there’s more to the Ice Queen than meets the eye. But they’ll have to overcome Abby’s fears—and Gabrielle’s own threatening secrets—in order to find their way to love.

*A copy of this was provided via netgalley

Asexual MC FTW! I was very excited when this book was announced because 1) it has an ace MC – and one who isn’t questioning it! Has a librarian/model pairing AND it’s #ownvoices! Admittedly I’ve also read great books featuring asexual protags that weren’t written by asexual authors (or authors on the ace-spectrum) but knowing that Elyse Springer is ace too made me just more excited to read Thaw. It also reassured me that the representation* wouldn’t be harmful or inaccurate.
(*It’s one way to portray it and not an universal portrayal.)

This book was just…it made me happy and I adore it!
I read this when I wasn’t feeling so good about being ace. There had been some BS on twitter that really dragged me down (though I should know better by now than to look – also when is there no BS regarding asexuals and ace-erasure?), so I decided to read this instead of another book I had planned to read. And this story definitely came at the right time for me – the dedication already made me tear up. Seeing a positive representation of an ace character – one with friends who are accepting without restrictions – and one who is content with being ace, really helped me. I really can’t put into words how much I love it when I see a protagonist who is like me – or at least very similar.

Gabrielle and Abigail come from different worlds. Gabrielle is used to not worrying about how she’ll pay the next rent, or if she’ll lose her job. Her life isn’t perfect, but in some ways she has it easier than Abigail who is worrying about possibly losing her job and potentially not being able to afford rent anymore.

I loved how both got to know each other, fell in love and also learned that their differences don’t necessarily have to keep them apart if they make compromises.
Elyse Springer did a fantastic job of portraying each characters worries without it being too much. Thaw was still mostly a light read.

Gabrielle’s transformation from “ice queen” to “Brie” left me with warm fuzzy feelings. I really enjoyed the opposites attract-aspect of this story. In some ways Gabby and Abigail couldn’t be more different but at the same time there’s a lot that they can relate to with each other. So seeing them slowly fall in love was just beautiful.

More than once I found myself wanting to be in New York to see the things they saw. The scenery just came alive on page and I couldn’t get enough.

I also loved how they found a middle-ground on the sexual aspect of their relationship without Abigail having to bend and twist just so she could be with Gabrielle. I want more stories like that!

I didn’t want this story to end. This story is special and beautiful, the pacing is great and I just have so much ❤ for it. Now I’m really looking forward to the next story in the series! If you haven’t read them yet, I strongly urge you to do that.