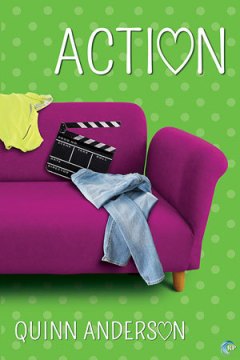 Pete is in a rut, though, and he knows it. And what’s worse, his boss knows it. If he can’t reignite his passion for the biz, he’s going to have trouble paying his none-too-cheap college tuition.

A copy of this was provided via Netgalley

I loved the first book in the series, Hotline, a lot. The chemistry between the characters was off the charts even though both characters don’t know each other, other than through the phone. So I admit that my expectations for Action were high. And sadly it didn’t live up to them.

As I said I loved the chemistry between Zach and John from Hotline, and because of that I was expecting something similar explosive between Pete and Kyle. Maybe even more so considering that in Hotline for most of the story the guys don’t know what the other looks like and only have the voice to go by. I just didn’t feel it. At all. The first half of the book was slow and really dragged for me.
I was expecting a fun read but had a really hard time getting into it in the first place. And then it didn’t really hold my attention for the complete span of the book. I found my mind wandering so I had to go back a page or two to not miss anything. Which ist never a good sign for me. One thing that made it harder to follow was how sometimes their porn-names would be used and other times the real ones. I understand why you’d do that in the different settings. But as a reader it confused me, especially in the beginning when I don’t know the characters yet, who I was reading about at the moment.

Action, sadly, was not my thing. There’s going to be another book in this series which I’ll probably read. I might wait until we have more details, a blurb or something, but Action did not live up to my expectations. This is a “it’s me, not the book” situation though, so if you like the sound of it, maybe give it a try.