Months after saving Jamie and Deanna from crywolf, Kiara and her brother Cole have moved into the city. While clubbing one night, Kiara is stunned to see her ex, Taryn, onstage. But before she can react, Jamie notices a distinctive tattoo in the crowd: an axe rumored to be the mark of the Huntsmen, a group of werewolf-tracking humans. The girls need to leave immediately—and since Taryn is also a werewolf, they need to take her with them.

The Huntsmen are more than a myth, and they’re scouring the city for lone wolves just like Taryn. Until the General North American Assembly of Werewolves lends a plan of action, Kiara’s small pack is on lockdown in a friend’s apartment, where she and Taryn must face the differences that drove them apart. Furthermore, the longer the group waits, the more it seems the Huntsmen haven’t been acting entirely on their own.

We’re excited to welcome Michelle Osgood on From Top to Bottom Reviews to kick off her Huntsmen tour!

Hi! Thanks for having me.  I’m a queer romance writer from Vancouver, BC.  My first novel, The Better to Kiss You With, was a F/F paranormal romance published by Interlude Press in 2016. Huntsmen, the next book in the series, is a F/NB romance with a bit more of an urban fantasy feel, and follows Kiara, the Alpha-designate of her werewolf pack as she’s forced into hiding with her genderqueer ex-lover, Ryn.

I thought I’d share a little bit more about myself in a way a lot of readers can relate to—by talking about the literary character I feel is most like me.

I’ve always felt a special sort of connection to Harry Potter. Maybe that’s just me wanting to see myself as the hero in an epic battle against good and evil… or maybe it’s me seeing myself in his procrastination, his incredible group of friends, and his dogged stubbornness.

One of my favorite things about Harry is that, minus his magic, he’s a pretty normal guy. Even in the wizarding world, he didn’t survive Voldemort’s attack because of any inherent power within himself, but because of his mother’s sacrifice.  Harry himself isn’t remarkable.  There’s nothing within him that distinguishes him from anyone else, and that is one of the things that drew me to the Harry Potter series, and that kept me reading.

Harry is “Harry Potter” because of the people in his life. His best friends Ron and Hermione keep him balanced, and push him to be better.  Without Ron, Hermione, and the entire DA, Harry is just a regular guy who’s determined to do the right thing.  One of the most powerful messages that I took from the Harry Potter series is that it doesn’t take incredible power or brilliance to be a good person—it just takes earnest dedication, and the ability to keep learning.

I am lucky enough to have an amazing group of friends that constantly pushes me to be better. I am irritatingly stubborn (just ask those same friends), and I am a terrible procrastinator.  I’ve procrastinated writing this, believe it or not!  Like Harry, I feel like a fairly average person, and I have to work to be good at things.  Writing comes to me with maybe a bit more ease than some people, like Harry and his magic, but I’m not inherently great at it.  I have to put the work in, and sometimes the work is hard, and sometimes I don’t want to do it, and when that happens I need my friends to give me a good solid push.

Harry is successful because he has people who believe in him, and I feel the same way. I’d love to think that I could write a book, or defeat an evil wizard, on my own without breaking a sweat, but we all know that isn’t true.  I think it’s so important to show heroes who need help, and who ask for it, because that shows us that anyone can be a hero.

“You can’t come back here.”

Confronted by an upheld palm, Kiara halted at the stairs that led backstage.

“This area is for performers only.” The Latina woman’s face was set in bored lines; her yellow shirt identified her as one of the club’s staff. Clearly it was not the first time she’d turned someone away that night.

“Hun, I don’t care if you’re meeting Evan Rachel Wood herself. Performer’s only.” The woman enunciated the last part without managing to pull her attention from the room behind Kiara.

The prickling behind Kiara’s eyes mounted and was echoed in the flesh of her gums.

“Maria, hey.” Ryn pushed back the black curtain. “Come on, let her through.”

“Tar—” Reluctance was heavy in the woman’s voice. “You know I’m not supposed to.”

“I won’t tell if you won’t, ‘kay? This is my girlfriend. We won’t cause any trouble. Promise.” Ryn held out her hand past Maria.

Kiara placed her hand in Ryn’s and plastered a smile across her face. “I’ll be good.” She added a flutter of her eyelashes and coaxed a blush to her cheeks. Ryn’s skin was hot under her palm. Touching Ryn had always felt like touching the sun.

“You’d better be,” Maria warned as she stepped aside and let Kiara through.

“Thank you.” Ryn winked at Maria, and Kiara heard the woman’s heartbeat accelerate in response. With a valiant effort, Kiara swallowed her huff of annoyance.

The back of the stage was dimly lit. Ryn kept Kiara’s hand in hers as she led the way, deftly avoiding the few other performers who loitered about, waiting for their turns on stage.

“We have to go,” Kiara repeated. She spoke more loudly now that they were away from everyone else.

“I heard you the first time.”

“Then what are we doing?” Kiara’s fingers curled perfectly around Ryn’s. She wanted to yank her hand free. She wanted to kiss the spot where they fit so well together.

Ten years. Surely ten years was long enough for feelings to fade, for the memory of what they had been to dull. She shouldn’t feel the bright hurt, the greedy hunger, as though it had been yesterday.

In the back of her head a siren screamed, a warning that she didn’t have time for this. Kiara’s grip on Ryn’s hand tightened involuntarily.

“I’m not leaving it. There’s five thousand dollars’ worth of equipment in there.”

“Ryn, you heard me. The Huntsmen are here.”

“Maybe.” They reached a set of lockers, and Ryn wriggled her fingers free of Kiara’s. “Aren’t you the one who told me they’re a myth? Do you really think they’d show up in Vancouver? At a drag king show?” But even as she spoke she opened the locker door and pulled free a large duffle bag.

“Werewolves are supposed to be myths, too.”

“And yet,” Ryn conceded. She slung the bag over her shoulder. “My bike is out front.” 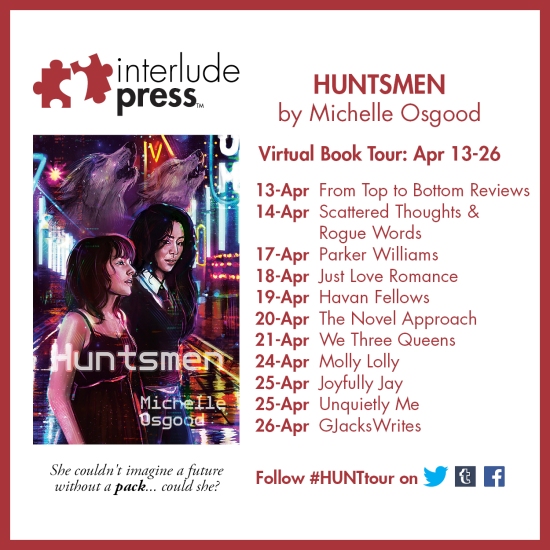 Michelle Osgood writes queer, feminist romance from her tiny apartment in Vancouver, BC. She loves stories in all media, especially those created by Shonda Rhimes, and dreams of one day owning a wine cellar to rival Olivia Pope’s. She is active in Vancouver’s poly and LGBTQ communities, never turns down a debate about pop culture, and is trying to learn how to cook. Her first novel, The Better to Kiss You With, was published by Interlude Press in 2016.